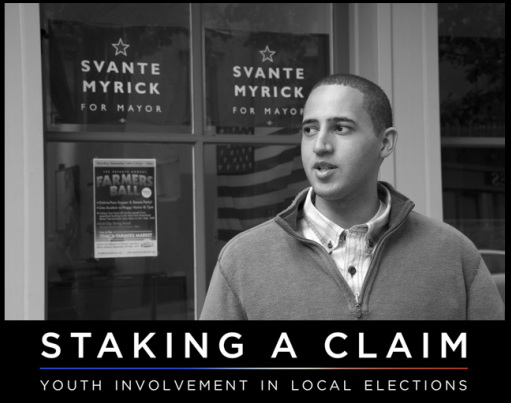 Svante Myrick, a 24-year old Cornell graduate, garnered a great deal of attention – and criticism – during the 2011 election season in his bid to become the youngest mayor in Ithaca’s history. After securing his place on the Democratic ticket in September, Myrick handily won the general election in November with 54 percent of the vote.

Wheat for Sheep Productions began to follow Myrick’s campaign in early September in an effort to explore youth involvement in Ithaca City politics. Myrick’s campaign team is comprised primarily of students and recent graduates, all of whom are active members in the local community. However, Myrick’s opponents have critiqued the campaign’s youth, arguing that students are “carpetbaggers” who don’t have stake enough in the community to vote in its elections.

Our documentary will examine how youth involve themselves in local electoral politics and how that manifests itself in Ithaca.

Staking a Claim is produced by Alyssa Figueroa, Sam McCann & Adam Polaski. Read more about the project on the Wheat for Sheep Productions website.