The Red Scare on the Silver Screen

Which is scarier: aliens or communists?

History has always had a great impact on the entertainment industry. From the dark, hyper-realistic films produced post-WWII, to the braindead zombie craze that followed the rise of technology, entertainers are constantly seeking to impact audiences with stories that play off the rapidly changing social and political landscape. The rise of the alien genre in the United States illustrates this very clearly during the Cold War and at the height of communism.

The 1950s were a time of great unrest in the United States. After World War II, the United States immediately plunged into a new conflict — the Cold War. This period of geopolitical tension between the United States and the Soviet Union (USSR) began in 1947 and ended with the fall of the USSR in 1991. Despite the lack of direct military contact between the two nations, new weaponry developed on both sides, which escalated their ongoing arms race. It was because of this arms race that weapons of mass destruction like the atomic and hydrogen bombs were in constant development throughout the war. It didn’t take long for fear to spread about the potential destructive powers of such weaponry. In an effort to take a stand against enemies of democracy, the House of Un-American Activities Committee re-invigorated their campaign to espouse anti-communist sentiments, calling all Americans to arms against communist invaders, and encouraging them to be wary of communists in disguise.

It was also at this time that a new threat was sweeping across the skies. The first unidentified flying object or “UFO” was spotted in 1947 (coincidentally also the year the Cold War started) when private pilot Kenneth Arnold reported “flying silver discs” that displayed feats that were not of this world. Before long, UFO fever was sweeping across the nation, with Americans looking to the sky to get a glimpse at these mysterious objects, and theorizing about their dangerous origins.

The combination of these two phenomena led to growing tensions in the United States, and led to widespread fear of invaders, extraterrestrial or otherwise. While these new fears worried most American citizens, it inspired others to begin creating works that focused on this paranoia, and thus the alien genre was born.

Before the 1950s, alien movies were little more than vehicles for cheesy props and special effects with minimal substance. However, by emphasizing the paranoia that had been building during this time, directors were able to redefine the sci-fi genre and rebuild it to be a psychological maze and an all-around unsettling experience for viewers. Aliens were no longer just coming from the sky and demanding to see your leader. They were invasive, controlling minds and consuming the Earth from the inside. You never knew if the person beside you was a friend, or an extraterrestrial in disguise.

The 1951 film The Thing From Another World famously launched this new phenomenon. Though not apparent at first, the realization that the monsters are communist comes later when the film urges its characters to, “Watch the skies everywhere. Keep looking. Keep watching the skies!” Similar to the call for citizens to look for UFOs, the film reminded citizens to look for potential invaders or Russian planes flying in with bombs.

After this film, studios began producing these “paranoid sci-fi” films at a rapid pace. Films like It Came From Outer Space (1953),  The War of the Worlds (1953), Forbidden Planet (1956) and Invasion of the Body Snatchers (1956). These films helped display the paranoia on a deeper level and featured the constant threat of aliens and those who sought to dismantle the American way of life by invading homes and attacking from above.

This was especially emphasized in Invasion of the Body Snatchers (1956), a film that focuses on a quiet invasion, in which aliens slowly replace humans as duplicates until you do not know who is human and who is a replacement. It is from this film that the term “pod people” was born, referencing the emotionless doubles of the humans in the film. This film links heavily back to the rise of communism, as these aliens are taking over to strip humans of their individuality and create a simple world, similarly to the ideals of communism and the idea of collective labor and lack of class division.

This fear is also looked at in the Twilight Zone episode “The Monsters are Due on Maple Street,” which looks at this paranoia through a self-reflective lens. It calls out those who turned on each other during these times of fear and shows that sometimes the worst threat to our lives is our willingness to turn on each other. 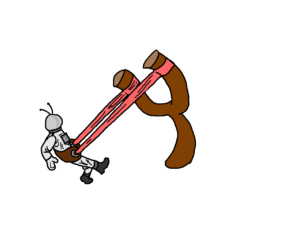 the emphasis of aliens as threats, and framed them as heroes and even friendly for children. However, this model can still be seen in films like Alien (1979), which equates foreign invaders and rapists, and The Thing (1980), which displays psychological paranoia. It is also because of these films that we can experience the paranoia of past generations, and look deeper into what scares us now and going forward.

Sarah Borsari is a first-year Cinema and Photography major who dressed up as sexy Marx for Halloween. You can reach them at sborsari@ithaca.edu. Art by Ben Vajdos, Contributing Artist.