The Emmy-nominated Netflix animated comedy Bojack Horseman returned on October 25th with the first part of its final season. The show, famous for its dark, satirical comedy, surrounds a former sitcom star as he battles addiction and attempts to correct his abusive behavior toward those who care about him. Though we only have access to the first eight episodes, it seems the show’s creators have gone a different direction with this season.

These episodes, more so than in previous seasons, focus on breaking down its central cast than on any actual plot. In the season premiere, we visit Bojack at a rehabilitation center. Now, several months later, he is searching for self worth, while reviewing how his alcoholism has affected others and coming to terms with reacclimation. In another episode, we see Princess Caroline struggling to balance her work and motherhood, not yet feeling how she is “supposed to feel” toward her daughter. The first part of season six serves as somewhat of a reminder. It updates the audience on the story arcs of these core characters, before what we can expect to be a powerful finale.

Comedy-wise, the new season is exactly what you expect. Fans of the show praise Bojack Horseman for its witty wordplay that contrasts with the heavy topics of self sabotage and loneliness. Luckily, that has not gone anywhere. With obscure pop culture references and utterly unnecessary alliteration, the dialogue is both subtle and phenomenal. Of course, the all-star cast of Will Arnett, Alison Brie, Amy Sedaris, Paul F. Tompkins and Aaron Paul doesn’t hurt either. 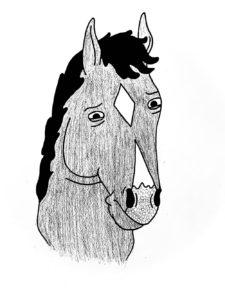 If there is a theme to this season thus far, it’s that Bojack is trying, which is important for his story arc. Bojack has always been humanized as someone who makes mistakes and feels great shame but who also searches for help in the wrong places. The lingering question thus far is whether or not rehab was successful. Bojack screws up again in episode five by causing Champ, his sobriety coach, to relapse. It reminds him of the role he played in hurting Sarah Lynn, an old friend. Bojack blames himself for her addiction spiral, but instead of sulking in those emotions, he decides to help. He actually steps into a bar and doesn’t have a single drink. He takes a sip of vodka in another scene, but throws it away, disgusted. Outside of his little story, he reaches out to his friends and is vulnerable with his emotions, something that he’s been unable to do previously. All of a sudden, Bojack seems like a mature, put-together person. It is understated but conveys his growth extremely well.

Still among the greats in adult animated television, in season six, Bojack Horseman remains amazing. For those who have yet to begin the series, I recommend you start soon, so that you can catch up for the series finale releasing in January 2020.