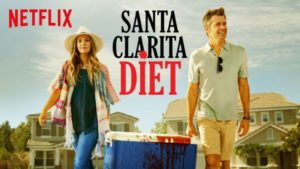 Santa Clarita Diet makes the unconventional conventional. At this point in television, many sitcoms are trying to twist the telling of suburban towns. Shows like Suburgatory and The Neighbors (both programs on ABC) have tried and ultimately failed to keep a long standing impression on their viewers while they aired. Suburban satires definitely aren’t new, but Santa Clarita Diet manages to stay fresh well into its second season.

The show is undoubtedly weird in its concept: One day, Sheila (Drew Barrymore) and Joel (Timothy Olyphant) find their peaceful family life thrown into disarray when Sheila dies and comes back to life craving human flesh. This not only adds tension to their marriage but also their relationship with their teenage daughter Abby (Liv Hewson). Serving as an undead consultant is their neighbors’ dorky son, Eric (Skyler Gisondo). As if being undead and forced to kill to survive wasn’t enough, Sheila and Joel constantly have to sneak around their cop neighbors to avoid jail-time.

Santa Clarita Diet is great. It constantly surprises with how it chooses to progress its story. While there are some floating mysteries around Sheila’s new condition, the show knows not to spend too much time there, because ultimately it’s about Joel and Sheila. Their marriage may not have been perfect before, but they’re dedicated to each other. The first season established how far they’ll go for each other. Season two is about seeing how much they’ll be able to do for each other.

They narrowly escape life and death situations on a daily basis, and the show smartly shows how that affects them, even incorporating Abby when necessary. In a profound moment in “A Change of Heart,” Joel tells Abby that they’re starting to run out of steam and they’re not sure how much longer they can keep their family afloat. Sheila’s condition has been a thing that they’ve mostly (and somewhat unsuccessfully) been trying to keep away from Abby, and to see that the show is willing to take risks and openly admit how much the Hammonds juggle is a bold choice. The show is rightfully grounded mostly in the drama of its situation as much as it’s grounded in comedy. Sheila and Joel rift with each other about the absurdity of their situation, and Abby constantly gives them shit when they succeed and when they fail.

Abby rightfully takes a backseat for most of season one. When season two rolls around however, we get to see how much the constant violence of her parents new lifestyle has started to affect her and how she starts to mirror her mother. While Eric isn’t necessarily similar to Joel, he does serve as a good foil to bring Abby back to reality. The show does try to push these two together, to varying success.

However, what I think the show does best is balancing the normal with the abnormal. The show knows that this new condition Sheila has does change their family’s life forever, but it also tries to remind us of how they do try to live normal lives. A lot of the episodes subplots come from Sheila and Joel trying to balance the activities of a normal suburban couple with constantly needing to commit murder and discover the truth of Sheila’s condition. As season two ends, there’s still a looming threat over the Hammonds as well as a new situation they must deal with, and I can’t wait to see how my favorite Santa Clarita couple deals with it in a third season.