RAW FROM THE SAW – TV Review: The End of the Fucking World 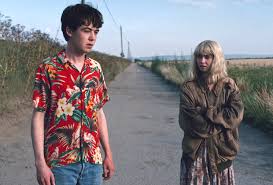 “I’m James. I’m 17. And I’m pretty sure I’m a psychopath.” And then you’re hit with a title card featuring one of the most famous four letter words, only the crucial letters replaced with asterisks because television censors say they have to. Welcome to the first minute of Netflix Original The End of the F***ing World.

So yes, we do follow self-proclaimed psychopath James, played by Alex Lawther fresh off his appearance as Kenny in “Shut Up and Dance” on Black Mirror. We also follow Alyssa (Jessica Barden), whose initial inner monologue might be the exact opposite of James: “I get these moments when I have to lie down because everything sort of feels, too much. And I look up and I see the blue or the grey or the black and I feel myself melting into it. And for, like, a split second, I feel free and happy.” Alyssa wants freedom and happiness, but James? He wants to find out if he’s a psychopath by killing someone. And he’s become set on Alyssa.

The show ultimately succeeds because of its excellent and oftentimes hilarious writing. The two characters have separate goals and thoughts that they usually hide from the other, and they are revealed to us through an inner monologue that’s used cleverly throughout. Some of the most hilarious and emotionally devastating lines in the show are delivered in these inner monologues. James is a weird worrywart and everytime they hit a fork in the road, he instantly freaks out and his inner monologue turns its anger on Alyssa. Alyssa, on the other hand, thinks something deadpan and rolls with the punches.

The show works so well because these characters couldn’t be more different, and it so easily gets that point across halfway through the first episode. We see Alyssa become interested romantically in James, and we see James go along with it because he wants to kill her. It’s almost like a cat and mouse game, except neither of them realize that they’re playing it.

The show is often funny, but it’s also dramatic. It doesn’t shy away from some very dark scenes. Alyssa and James hit some serious obstacles early on, but they start to care for each other and try to find a way to pull through. This isn’t to say that our heroes are infallible. James may be a sympathetic and shy dork, but he still wants to kill Alyssa as an experiment. Alyssa is looking for a better life outside of her home, but she’s also a selfish jerk who doesn’t care about other people’s feelings. I wouldn’t root for the either of them if they weren’t played so effectively by Lawther and Barden. They pull off the best and worst of these characters so well that you want them to succeed and figure out not only what they need but what they truly want as well.