RAW FROM THE SAW – Album Review: Beautiful People Will Ruin Your Life 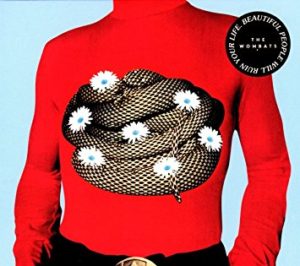 For some artists, maturity brings out new experimentation with sound, and lyrics with deeper significance. Many get better with age. Unfortunately, this has not been the case with the Wombats.

It wasn’t until listening to Beautiful People Will Ruin Your Life that I realized how much the band had lost their grandiose, quirky spunk within their two most recent releases.

BPWRYL sounds like a collection of songs that did not make the cut on Glitterbug. While there are a few surprises, the album lacks memorable moments.

Murphy’s usual clever metaphors are almost nonexistent on this new album. In previous projects, he painted vivid pictures of confusion with lines like “carrots help us see much better in the dark / don’t talk to girls they’ll break your heart / this is my head and this is my spout / but they work together; they can’t figure anything out,” on “Kill the Director” from the band’s self-titled EP.

He now opts for direct statements illustrating his desperation. I never thought I would hear, “I want to love you but it hurts, hurts, hurts . . .” as a hook from the witty lyricist, yet “Black Flamingo’s” chorus sings these simple whines.

In classic Wombat’s fashion, BPWRYL begins with a melodic verse rhyming “run me over”?with “orange cola” that builds to an underwhelming chorus on “Cheetah Tongue.” The peppy track is followed by the even more upbeat “Lemon to a Knife Fight,” which also does not bring the punchiness that the listener expects.

“Turn,” the next track, is very reminiscent to the synth-heavy aura of Glitterbug, especially “Emoticons,” which follows a similar structure and slow pace. The song also contributes amusing lyrics like, “You could give an aspirin the headache of its life / maybe it’s the crazy that I’d miss / watering plastic plants in the hope that they’ll grow.”

The latter half of the album provides a change of pace, best highlighted in “White Eyes” and “Out of My Head.” The out of Wombats-character bassline lead on both tracks and Murphey’s notably low voice on “White Eyes” animates their usual form.

“Dip You in Honey” has an Oasis-y guitar riff that depicts the group expanding out to other genres and styles.

If anything, the Wombats have mastered the formula that led them to success on Glitterbug, while incorporating new components to make the album sound fresh at points.

This blueprint includes a synth or guitar-driven instrumentation, and strange lyrics brought to life by Matt Murphy’s signature soft falsetto that builds to an explosive (or an attempt at explosive) chorus.

While this album may have been slightly disappointing to longtime fans hoping for an homage to their early sounds on A Guide to Love, Loss & Desperation and This Modern Glitch, this should not be considered a step back in their career.

Beautiful People Will Ruin Your Life showcases the Wombats doing what they do best: turning sad songs into music that you can’t help but dance to.