Scare-acters: Where Your Halloween Costumes Come From

Have you ever wondered why little kids dress up as serial killers? Buzzsaw examines why.

Halloween is a time for characters of all types; from newer characters such as Jason Voorhees and Freddy Kreuger, to older ones such as Dracula, Wolfman and Frankenstein’s monster, it’s easy to pick the ghoul that will suit one’s 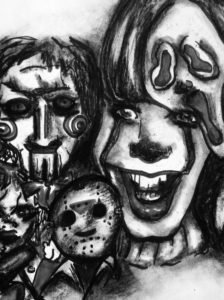 costume needs. Certain costumes are easy, some are common, and some are creative. All can be attributed to some kind of folklore, whether it be modern or historical, but even the simple ones can be overlooked. What’s the history behind your Halloween costume, and what does it say about you?

On the surface, creatures like Dracula seem simple enough to decode; they’re representative of incredibly famous gothic science fiction novels, and they’re perhaps the most universally known, least scary horror characters of all time. They’re Scooby-Doo scary, intended for little kids and the occasional, unsuccessful reboot. The truth about Dracula is, however, much more terrifying. According to legend, he comes from a terrorizing prince by the name of Vlad the Impaler, who captured, tortured, and, as the name implies, impaled hundreds of victims during his various reigns. It’s unclear exactly where specific aspects of his mythology come from, but many have their roots in ancient mythology; vampires got their aversion to garlic from the ancient Egyptian belief that it had healing powers, and the idea that a stake in the heart was the only true way to kill a vampire came from the idea that it would “deflate” them, which often led people to bury their dead under a sharp wooden stake.

Characters like werewolves have similar backgrounds in fear. Although legends of werewolves date back to Ancient Greek mythology, they truly rose to prominence during the era of witch trials, when it seemed that every illness could be blamed on a curse or transformation. In fact, there is evidence that executions occurred in what is now Switzerland, and that oftentimes, these people were also taken as witches during the burnings and hangings that so often occurred. However, in some places in Europe, it was often treated more as an illness, and lycanthropic cures were pedalled around, promising to heal loved ones of their afflictions. Much of this can be attributed to a misunderstanding of medical conditions, mental illness and the same mass paranoia that caused hundreds of women to be burned at the stake as witches.

Another popular costume is, of course, that of a witch. The folklore behind witches is perhaps more well known, but is by no means less disturbing. They have their origins in the Hebrew Bible, with the Witch of Endor, and reappear in the mythology of Ancient Greece. They’re described in a relatively benevolent light until the Renaissance, and again in Shakespearean literature like Macbeth, where they start to become the broom-riding, cauldron-owning witches that we see in modern lore. A great deal of the mythology gets enforced, of course, during the Salem Witch Trials, when people were executed as witches for crimes such as taking away their husband’s virility, producing medicines and allegedly bewitching men. Not only did this early paranoia lead to English class mainstays like The Crucible, as well as modern portrayals of witches as in American Horror Story’s Coven, but it has become a classic Halloween costume despite its disturbing origins.

And then, of course, killers like Jason and Freddy, as well as Pennywise from It and Ghostface from Scream, are inspired by real life costumed killers. John Wayne Gacy, a serial killer from the late 1970s, was a performing clown who raped and killed young men, and often dressed as his “clownterpart” in order to perpetrate these killings. Killer Ed Gein made masks out of his victim’s flesh, an act that is partially (if not as gruesomely) reflected in the mask-wearing killers that dominate the silver screen, such as Buffalo Bill in The Silence of the Lambs. This trope is so common that it’s often hard to pinpoint its exact origin. However, it is by no means something new, but simply a reflection of the serial killers that have dominated urban legends and campfire stories for as long as people have been telling them.

It’s true that these creepy characters have become common Halloween costumes for children and adults alike. While the most popular costumes change from season to season, with princesses and superheroes surging ahead as best sellers, these have become mainstays, simple and scary costumes that will never go away. Their origins can be disturbing, twisted and disgusting, from bloody murderers and impaling princes to innocent men and women who were falsely accused. It’s strange to remember that, at times, we turn these things into an event, a goofy one with candy and fake blood. But it doesn’t make Halloween any less spooky.

Audra Joiner is a first-year exploratory major who has dressed up as Hermione Granger five years in a row.