Home Featured Debunking the “City Upon a Hill”
FeaturedIdolsUpfront

Debunking the “City Upon a Hill”

There is an American narrative as long and potent as American history. In fact, it often shapes history itself. It both guides our actions, and influences the way in which we recall them. This is the narrative of America: the benevolent world leader. 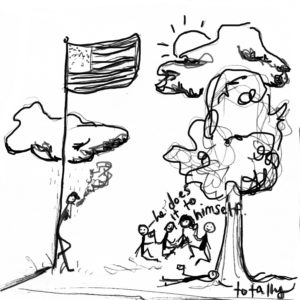 The idea that the United States is the country others look to for guidance and inspiration is echoed constantly in the rhetoric of politicians and through the lens of the media. Puritan leader John Winthrop envisioned the new country as a shining “City Upon a Hill” with “the eyes of all people upon us” in 1630. This biblical image has survived in the words of John F. Kennedy in 1961, Ronald Reagan in 1989, and — more recently — former FBI director James Comey in his Senate hearing.

Unfortunately, the pure and noble connotations of this image seem incongruous with the way in which the United States often spreads its influence — through foreign intervention. These interventions often promote exactly what the country’s leaders claim to condemn and work to suppress the values the U.S. was supposedly founded upon. To understand what really motivates U.S. intervention, the methods used and the goals accomplished must be evaluated. The case of Chile is a good place to start.

In 1970, the people of Chile chose Salvador Allende as their leader, making him the first democratically-elected Marxist president on that continent. Allende promised reform to the exploited working poor and middle class, redistribution of wealth and land, and independence from controlling global powers like the U.S.

The news of this election came as a shocking blow to the American government, which had already — as declassified documents would later prove — covertly spent millions trying to get Allende’s opponent elected. President Richard Nixon met with National Security Adviser Henry Kissinger, Attorney General John Mitchell and CIA Director Richard Helms. Together, the four men hatched a plan to oust Allende. According to Helms’ handwritten notes from the meeting, Nixon ordered them to appropriate at least $10 million to assign “the best men” to the job, and to “make the [Chilean] economy scream.”

As documented in Peter Kornbluh’s The Pinochet File: A Declassified Dossier on Atrocity and Accountability, by September of 1970, the C.I.A. had successfully created enough disarray in Chile to foment a coup. The Chilean military attacked the capital, took control of the government by force and installed the genocidal military rule of General Augusto Pinochet.
Phillip Josselyn, an activist with the Committee in Solidarity with The People of El Salvador, said stories like this are not uncommon. In fact, the U.S. displays a nasty pattern of supporting violent foreign leaders who will cater to U.S. economic interests and ensure that dissenters are suppressed.

After returning from the Vietnam War, Josselyn was dissatisfied with the disparity between his own personal experiences there and how the U.S. media framed the war as being about nation-building. “It had not been about bringing democracy to Vietnam,” Josselyn said. “It was really about controlling the region.”

Josselyn has since seen the U.S. repeat this type of behavior all over the world.

During the 1980s, the citizens of El Salvador engaged in a movement against a military dictatorship, which had ruled and repressed them since the 1930s. Josselyn said the government’s response was so extreme that the military and closely-linked death squads were rounding up leftists and murdering about 800 a month in order to keep down the insurgency. The United States financially supported the Salvadoran army, “to the tune of a million dollars a day,” Josselyn said.

A very similar case can be observed during the same time period in Nicaragua. After years of dictatorship, Nicaraguan citizens known as the Sandinistas rebelled against the government. Again, the U.S. funded a counter-insurgency force, dubbed the Contras, to beat back this democratizing effort.

But the U.S. doesn’t just intervene in foreign affairs through the incitement of coups and funding of militaries. Sometimes it takes a more direct approach and influences actual elections themselves.

Dov Levin, a researcher with the Institute for Politics and Strategy at Carnegie Mellon, has studied the frequency of major global powers influencing foreign elections. Levin found that the U.S. has influenced 81 elections between 1946 and 2000, more than twice as often as Russia, which has the next highest frequency.

The U.S. is usually successful in getting their chosen candidate elected. According to Levin’s data, American intervention boosts the preferred candidate’s total votes by an average of 3 percent. “That is enough in many cases to give the side the United States wants the winning edge,” Levin said.

There are several different methods of influence the U.S. uses in foreign elections. One such strategy is funding a certain candidate’s campaign. Levin said this could involve C.I.A. agents literally delivering big bags of cash to the preferred side.

More public methods may also be used. Levin gives the example of an American ambassador threatening to cut foreign aid if a particular candidate or party wins. On the other side of the coin, sometimes the U.S. promises an increase in aid if the proper candidate is elected.

Levin says the U.S. has also engaged in the dissemination of disinformation about opposing candidates. Levin calls this “the non-digital version of what the Russians did in 2016.”

Other methods include the designing of campaign posters, the preparation of television ads and the training of locals on how to get people out to vote for the “right” person. Covert methods are usually preferred to ensure that there is no counterproductive backlash from the citizens of the targeted country, Levin said.

During his Senate hearing, James Comey was asked why Americans should care about Russia’s interference in the 2016 election. Comey broke into a smile and said warmly, “We have this big, messy, wonderful country where we fight with each other all the time. But nobody tells us what to think, what to fight about, what to vote for except other Americans.”
Comey’s response typifies the American belief that interference with our elections is an attack on our democracy. But how can a nation whose rhetoric so reveres democracy be the same nation that meddles in many foreign elections and financially backs the slaughter of foreign citizens fighting for democracy? If U.S. intervention is not motivated by democracy, what is the motivation?

In many cases, it seems neoliberalism is the guiding force shaping America’s interventionist behavior. In the cases of Chile, El Salvador and Nicaragua, the U.S. chose to repress the efforts of citizens and to protect the structure of oligarchies that provided economic benefits to them.

Patricia Rodriguez, an Ithaca College politics professor from Chile, believes the problem is a distorted perception of democracy in the U.S. “There is a narrative perpetrated by U.S. leadership of all stripes that the country epitomizes freedom and that capitalism is a synonym of democracy. But this needs to be questioned,” Rodriguez said.

Through his work as an activist, Josselyn has found that U.S. intervention is often in the interest of multinational corporations. For instance, in 1954 the Dwight D. Eisenhower administration launched a coup in Guatemala to overthrow a newly-elected president whose reforms would have benefited citizens but hurt the profits of United Fruit Company — now known as Chiquita. Josselyn said that “What [the U.S.] prefers is a weak, local oligarchy that will put down the peasants, but not operate in any way that’s going to threaten U.S. economic interests.”

At home, there is not much mainstream criticism of the past or current interventionist measures the U.S. has taken. Rodriguez feels that this ignorance is manufactured: “Many people are not aware of U.S. intervention in other countries because the propaganda machine and secretive dealings are a priority and because critical voices are criminalized and muffled,” she said.

The policies of neoliberalism seem to transcend national boundaries. Following the various democratizing efforts of the 1960s, the business sector of the U.S. community realized quickly that something had to be done to stop this trend. Just one example is a memorandum that Lewis Powell, who later became a Supreme Court Justice, sent to the U.S. Chamber of Commerce titled “Attack on American Free Enterprise,” in which he warns of the risks of democracy, writing, “Business and the enterprise system are in deep trouble and the hour is late.”

No matter the country in which it happens, democratizing efforts by citizens are considered unacceptable threats to the business world.

Citizen participation in government has a long history of being beaten back by a pro-corporate, militarized state. Whether it is El Salvador, Nicaragua, Chile, Guatemala, Vietnam, or the United States, the conclusion is clear: democracy is bad for business and the military is an instrument in minimizing it.

All this points to the fact that the United States’ behavior abroad conflicts seriously with the popular image many people in the U.S. have of America as the gold standard of freedom and the benevolent bestower of democracy abroad.

Rodriguez calls this attitude antiquated, colonialist and racist. Given all that the U.S. has done internationally, Rodriguez doesn’t believe it can be held up as an idol or an example of freedom for the world to follow.

Owen Walsh is a third-year journalism major whose article will probably be banned by the Texas Board of Education. You can email them at owalsh@ithaca.edu.