If you were to Google search the judges of American Idol, the running list would likely be longer than the list of the show’s memorable winners. As I remember it, the American Idol panel consists of none other than Paula Abdul, Randy Jackson and Simon Cowell. I embodied my role of “dedicated viewer” long before the original cast changed the first time but I’ve seen enough of the latest seasons to be confident in this decision.

There was just something about those first few seasons of Idol that are completely unmatched by the new revivals of the series. Maybe it was because at its original premiere on the Fox Network in 2002, it was the first American reality talent show of its kind or maybe it was because of the seemingly genuine dynamic that those original three judges shared.
Paula played to the nostalgia of the parent demographic of viewers, they grew up with her music and therefore saw her as a credible judge, one that could really sense potential stardom because of her own professional experience. She added the feminine point of view that was oftentimes endearing to viewers and always gave contestants a chance before judging them at face value. Randy was a character of sorts; his “It’s a no from me, dawg” made his rejections wholesome rather than jaded and his background with the production side of the industry made his opinion matter. And Simon, of course, with his two sizes too small black t-shirt and resting mean face added the shock value of brutal honesty to the panel. If there was a ridiculous performance (William Hung, anyone?) Simon would not withhold judgement. If there was an exceptionally outstanding performance, Simon would hesitantly compliment the contestant and the viewers at home would have no choice but to fall in love with them, too.

The way this trio interacted with each other on screen made for a great, somewhat candid plot line that lasted throughout the course of the original show. From tryouts to finale nights, the judge’s made it known who their favorites were so when you sided with a contestant, you were siding with a judge as well — Paula’s favorites were typically mine and my mother’s as well. My dad usually sided with Simon. 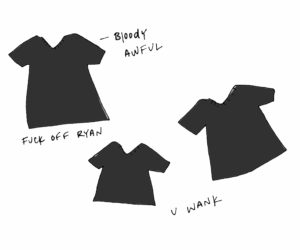 Since American Idol was the first reality singing competition of this era, its success was not surprising. The cable talent show had no other singing shows to compete with it until America’s Got Talent premiered on air four years after Idol in 2006. According to The Atlanta Journal-Constitution, that fifth season of American Idol in 2006 yielded its highest ratings since season two. The top ten finalists of this season without a doubt make up one of the most talent heavy rosters, including Katharine Mcphee, Chris Daughtry and Kellie Pickler.

It seems after this season the winners and finalists became more culturally irrelevant.

And honestly, many times the first place title doesn’t necessarily lead to the greatest success. This might be because the first place spot is often accompanied by a binding record deal or maybe it’s ingrained in America’s obsession with rooting for the underdog.

Kelly Clarkson, the first ever winner of the series, put Idol on the map and made it more than just a channel surfer’s pit stop. And you can’t think of American Idol without associating Carrie Underwood and Jordin Sparks (both first place winners) with the show. But many of the other names that may come to mind — Jennifer Hudson, Clay Aiken, Adam Lambert — were not title winners at the end of their respective seasons and are making moves in the music industry to this day.
For its first few seasons, Idol yielded music icons and even some iconic bad auditions, too. William Hung, who I mentioned earlier, is notoriously known for his audition with Ricky Martin’s hit song “She Bang.” Although his singing was atrocious, as viewers we loved the shock value he offered and the reactions of the judges as they tried to keep their composure. It wasn’t just one thing about the show that made America first fall in love with it, it was many: the seemingly novel plot, the dynamic of the original trio of judges, the mix of pure, raw talent intertwined with memorable yet horrible auditions.

After season seven, though, American Idol’s ratings maintained a steady decline as reported by Billboard and by season eighth the original judging panel added a fourth: Kara DioGuardi. As I write this I still genuinely could not name a single song of hers off the top of my head, but according to her website she’s been nominated for a Grammy before and has experience performing on Broadway. Either way, she only lasted for two seasons and thus began the ever changing cycle of Idol judges.

In my opinion, this is where it all went south. In order for a reality competition show to succeed in my eyes, there has to be consistency with the aspects of the show that the audience likes. In Idol’s case, this was the three original judges. If they wanted to mix things up in an attempt to raise their ratings they could have added some sort of twist to the competition aspect of the show like, hmmm, maybe having the judges be blindfolded during auditions or something so they couldn’t judge an act based on their looks? (The Voice would do this very thing in 2011 and has had continued success since). I know that there were definitely contracts and professional moves that were made by producer puppeteers behind the scenes of the judge swaps but I truly believe that if it’s not broken don’t fix it, and as a viewer Randy, Paula and Simon didn’t need to be changed. So it goes.

American Idol’s final season was to be in 2016 but the rights of the show were supposedly picked up by ABC and it will be returning in 2017 on this network after 15 years on Fox. The new judges, in somewhat of an act of desperation by the network (maybe? probably.) will be Luke Bryan, Katy Perry, and Lionel Richie. A trio that in ways similar to the original judges, plays on nostalgia with Richie and adds a feminine perspective with Perry — but the real question is: who of these three will be the hardass and tell it like it is? No one can be that the way Simon was in Idol’s infancy.

Other competition shows have gotten the hang of it. America’s Got Talent originally had radio personality and producer Howard Stern as their voice of reason and oftentimes pessimism and Nick Cannon as their Ryan Seacrest-esque but much less vanilla host. After these two left, the new cast consists of Howie Mandel, Mel B of the Spice Girls, Heidi Klum, Tyra Banks as the host and, of course, Simon Cowell. How these decisions were made and how AGT got the best hand in this game of reality roulette I cannot be sure, but whatever business plan they’re following seems to be working. Although this is not exclusively a singing show like Idol, they thrive off of singing contestants of all ages and backgrounds. The lack of an age requirement between 15 and 28 years old, like Idol, makes it easy for America’s Got Talent to find stars that are sustainable long after their seasons end. One of their recent winners, Grace Vanderwaal, is only 13 years old and already a singing powerhouse. Due to her age, I’m sure AGT will be profiting off of her talent for years to come.

So yes, long gone are the days of my family gathering on our sectional couch after dinner to watch Hollywood hopefuls sing their hearts out in an attempt to earn themselves a golden ticket to the next step in their journey toward stardom. At least, not in the way that Idol once made us. Now I opt for shows with added challenges to the plot: blind auditions of The Voice, creating singing groups out of strangers like Boyband, the golden buzzer of America’s Got Talent. The twists are needed during this day and age where singers and stars can be found on Youtube or Vine. Shows need to offer something besides a way to show off talent, the contestants need to be challenged to really engage viewers.

Don’t get me wrong, I have absolutely no knowledge of what truly went on after those epic seasons of Idol that made its demise seemingly inevitable. It had to be more than the changing cast but I think it had so much to do with the changing audience as well. We loved watching the success of the first few season’s winners and other finalists but eventually, as other networks caught on, they instilled complex competition rules to let us, as an audience get more involved than just voting in via telephone. We now get excited when drama unfolds and one judge wants to steal a singer from another judge’s team and we get chills when an 11-year-old sings Whitney Houston to a tee.

Nevertheless, American Idol made a lasting impact on the television world by proving a singing competition can be more than just a space filler during a summer season. Moreso, Idol made a lasting impact on the music world by giving us the musical icons that it did. I just hope that this final attempt at making American Idol what it once was does the original show some justice because if not, it’s a no from me, dawg.

Alexis Morillo is a third year journalism major who enjoys wearing small black shirts just like Simon Cowell. They can be reached at amorillo@ithaca.edu.