What keeps us up at night

How private are we, really?

We are a nation of anxiety. Everything from our bills to the news is keeping us up at night, leaving us to stare into the blank space of the ceiling above us. According to the National Institute of Mental Health, over 40 million Americans suffer from some sort of anxiety disorder. With the ability to access information at its peak, Americans have reasons to be more anxious than ever. Every night we scroll through our smartphones before bed — Trump’s Twitter, police brutality, Russia — and learn about what we’re supposed to be afraid of.

What people are afraid of is based both on their generation and where they fall on the political spectrum. For instance, a liberal millennial might be afraid of police brutality and the electoral college that failed them this past election. Similarly, a conservative baby boomer is more likely to be afraid of the rise of the the liberal elite or an immigration crisis happening in the United States. Both points of view are valid, and both points of view cause people to lie in bed, hoping these problems won’t lead to their country’s demise. 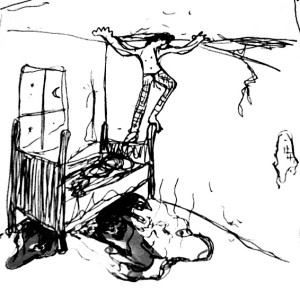 The phantom of the “Red Menace” that struck this nation with fear 50 years ago is making its way back on the public’s radar. A study published in February of 2017, by YouGov that surveyed over 7,000 adults, found that over 55 percent of Americans consider Russia either “unfriendly” or a total enemy. Only 19 percent of Americans believe that Russia is a friend of ours on a political level. With the current controversy of Trump being investigated by the FBI for his potential ties to Moscow, despite his efforts to minimize Russia as a perceived threat, Americans are being pushed back into the mindset that we had during the height of the Cold War.

On top of this, WikiLeaks makes headlines about once a month with a new leak that makes us believe we are directly affected. We’re living in the age of post-Edward Snowden paranoia, where we’re constantly in fear of who’s listening to our phone calls, who’s reading our texts and who has access to this information. Within the past four years, the National Security Agency has been a very common source of anxiety among all Americans, as the public learns more and more every day about how much of our information is being shared with the government.

I have never taken a strong issue with what the NSA does, because I don’t feel like I have very much to hide. They can listen to my phone calls with my mom all they want. I was never afraid of my personal privacy until I sought out the opinions of attorney Mike McShane, a class action lawyer from San Francisco. McShane had a lot to say about commercial surveillance, claiming that his biggest anxiety comes down to who’s gathering our information.

“Privacy. There are a lot of class actions [lawsuits] out there involving the tracking of people in what they do on their phone and what they do on the internet,” McShane said. “It leads to a lot of companies who are really just gathering information solely so that they can identify this person in their habits and sell that information to advertisers. He wants citizens to believe that we shouldn’t fear the government, or the NSA, as many of us have been led to believe. In his words, we should be fearing a “Big Brother Google.”

McShane claims that the NSA listening to our phone calls isn’t a big concern. “The difference between what the government does and what private companies do is money,” he said. “They [our government] aren’t listening. They aren’t watching you… If a red flag goes up, they’ll start honing in… If they really do need to watch you, then they have to go to court and get a warrant.”

Edward Snowden isn’t McShane’s biggest hero either. He claims the controversy surrounding the leaks about the NSA did more harm than good. “Snowden tried to wrap himself in the flag… He put a lot of people at risk… [Our government has] to go through a lot of work to make sure we’re safe.”

So it seems that our anxieties are a bit misdirected when it comes to what we should be afraid of. While major news broadcasters tell us regularly that we should be afraid of our government infringing on our privacy rights, it seems like our true enemies are big corporations collecting data to customize what advertisements we’re going to see when we log on. This keeps me up at night because I have come to realize I am a just a product to the products I am using.

Liam Audet is a second-year politics major who only surfs the web on Google’s incognito browser. You can reach them at laudet@ithaca.edu