The young and the restless

Gone are the days of counting sheep in order to get a full night’s rest. Now there’s everything from remote control mattresses and memory foam pillows to even medication to aid with restlessness. And if none of those solutions work, there’s always the option of a dependable cup of morning coffee to help you get through the day after a sleepless night.

In the United States, it is estimated that about 83.6 million adults are sleep deprived, according to a February 2016 Huffington Post article by Anna Almendrala called “More Than A Third Of Americans Don’t Get Enough Sleep.” Sleep deprivation is considered anything less than the recommended seven hours of sleep for those ages 18 to 60.

These numbers are so notable that the Centers for Disease Control and Prevention (CDC) classifies sleep deprivation as a public health issue in the United States. And although sleep deprivation as a whole is a problem, there is also the issue of diagnosable sleep problems, like insomnia, which around 60 million Americans show symptoms of as reported by National Public Radio in 2008.

Sleep is a human behavior that is necessary to our health. Without the recommended seven hours per night, individuals face an increased risk of conditions like obesity, diabetes, high blood pressure, heart disease, stroke and mental health as a whole, according to the CDC. Even so, it seems Americans have a more problematic relationship with sleep in comparison to their international counterparts.

A 2015 article by Daily Mail analyzed the popular smartphone application Sleep Cycle to find out which countries have the best relationship with sleep. In the top three spots for sleep quality were Slovakia, China and Hungary, respectively, with the United States taking spot 48 on a list of 50 countries.

A reason for the country’s sleep deprivation epidemic could be related to how Americans use technology. An article by Everyday Health entitled “Why Don’t Americans Get Enough Sleep?” explains that the blue light that we come in contact with through phone screens and television sets suppresses the hormone melatonin which helps us to fall asleep. Americans have the choice to constantly be connected and the effects of screentime last long after phone direct use.

Electronics aside, Americans can not achieve substantial sleep because they simply do not set aside the time for it. Culturally, Americans are always keeping themselves busy with work, exercise, entertainment and, oftentimes, more work. This reigns true for college-aged Americans as well as older adults. Between class, studying, extracurriculars and maintaining some sort of a social life, 70 percent of college aged Americans are reported to get insufficient sleep and 50 percent reported daytime sleepiness despite their sleeping habits in a 2014 study by Shelley D. Hershner. This should not be surprising, as many college students consider their 2 a.m. Snapchats of the library a badge of honor rather than the preliminary sign of a chronic health problem. 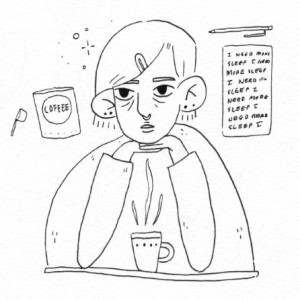 Hershner does point out in her study that college-aged individuals are psychologically wired to have a delayed circadian preference; in layman’s terms, they’re “night owls”. This change happens during puberty and accounts for why students stay up so late to finish their work. It’s the early wake up calls for classes or other responsibilities, say sports practice or a job, that don’t allow them to reach the necessary hours of rest that would help alleviate their daytime sleepiness. So the sleep deprivation of college-aged individuals may not be a generational problem, but rather a result of their inconsistent daily schedules.

This idea is supported by Penelope Papalambros, a PhD student in Northwestern University’s Interdepartmental Neuroscience Program who focuses her research on sleep and circadian rhythms.

“Certainly the pressure to pull an all nighter in college is detrimental, not just to mental health but also physical health,” Papalambros said. “The early college years can be similar to the late high school years in that sleep is particularly important to function properly. Life factors often make it difficult to get enough sleep. The circadian rhythm still tends to be shifted to prefer later hours and waking up later in the morning. Therefore, early classes in college can be an issue.”

Fortunately, there are more and more technologies coming to fruition that are being used to help students reclaim their relationship with sleep. MetroNaps is one such company. It was founded back in 2003 based off of a rather simple principle: employees in the workplace and students at universities need more sleep in order to improve performance. MetroNaps provides services to these communities by installing what they call “EnergyPods” which are chairs engineered to help individuals reap the benefits from a 20-minute nap in order to increase productivity. The curve of the seat of the chair itself, a privacy visor over the headrest, and a gradual “waking” mechanism that includes lights, vibrations and music all work together to ensure maximum relaxation and sleep.

Christopher Lindholst, CEO and co-founder of MetroNaps, has noticed how impactful these services have been to their clientele.
“They serve as a reminder of the importance of sleep,” Lindholst said. “EnergyPods installed at universities tend to see the most utilization of all of our installations in part, because students don’t have any inhibitions to taking a brief rest, but also because the equipment tends to be installed in 24/7 facilities like student unions and libraries.”

It’s important to remember that there is a happy medium when it comes to napping, because too much sleep during a daytime nap can actually negatively impact nighttime sleep. Jordan Gaines Lewis, a neuroscientist and sleep disorder researcher at Penn State College of Medicine, noted that one of the best ways to improve sleeping habits is to first address your behaviors during the day.

“Naps can be good, but taking too many (or too long) naps can interfere with nighttime sleep,” Gaines Lewis said. “The best way to improve daytime alertness is to make sure you’re getting adequate sleep at night, adequate sunlight throughout the day to keep your circadian rhythm synced, and developing a regular sleep pattern by going to bed and waking the same time on weekdays and weekends.”

Papalambros also emphasized the benefits of naps when done correctly. “The reality is that nothing can quite make up for sleep loss. Ultimately, some scientists argue that sleep debt is accrued over time and can never be mitigated (or gotten back) after it is lost,” she said. “However, there is evidence that suggests that short naps during the day can help mood and memory.”

Developing more consistent sleep habits is easier said than done, though, because insufficient sleep is affecting Americans across the country. This is supported by the increase in the prevalence of insomnia over the years. In 2014, SleepEducation.org stated that up to 35 percent of Americans have brief symptoms, 20% have short term insomnia (lasting less than three months) and 10 percent have chronic insomnia that occurs multiple times per week.

Insomnia is not just struggling to get to sleep initially, but it also includes problems staying asleep throughout the night and being able to wake up at reasonable hours. These problems could be credited to unhealthy sleep habits like electronics before bed and the like, but is often paired with an overall anxiety about sleeping. “While people should be conscious of their sleep habits, obsessing over the amount of sleep you need can also have consequences such as anxiety and insomnia,” Papalambros said.

This could account for the prevalence of insomnia in college students, a group that is often anxiety prone to begin with. Outside forces, like consumption of alcohol or stimulant “study drugs” like Adderall also influence their sleep patterns in a negative way. A 2012 study conducted by DJ Taylor and colleagues found that 9.5 percent of the 1,074 college students in the sample were found to have symptoms in line with the Diagnostic and Statistical Manual of Mental Disorders definition of insomnia.

No matter what the cause of sleep deprivation is, Americans still find themselves sleepy throughout the day. According to the Daily Mail analysis, Americans seem to be the most sleepy (and therefore, grumpy) on Tuesdays. Our relationship with sleep could be an answer as to why 54 percent of Americans drink coffee every single day with an average of 3.1 cups per day (totaling upwards of 27 ounces of the beverage) as published by Harvard in 2010.

It’s important to remember that caffeine is indeed considered a psychoactive drug and because it can be both water and fat soluble it has the ability to enter the brain through the blood-brain barrier. SmithsonianMag.com explains that caffeine allows the already existing stimulants in our bodies to run wild — giving us just enough energy to get through the day, until another cup is needed before the post-coffee crash ensues. As Gaines Lewis said, “avoiding caffeine and alcohol late in the day” is one behavior that can be a step in the right direction for one’s night’s sleep.

The cyclic nature of how many people choose to ingest caffeine mirrors addiction a little too closely, causing people to become dependent on coffee or other caffeinated beverages to get through their daily tasks. But with a national problem with sleep deprivation, it doesn’t seem like our country’s dependence on caffeine will slow down before our sleeping habits improve.

Before the country as a whole can improve its sleep habits, individuals must become aware of the importance of healthy sleep and how they can go about changing their own sleeping behaviors for the better. This awareness is what many sleep experts call “sleep hygiene,” according to Papalambros. “There are basic steps that can be taken to remove barriers to getting a good night’s sleep. We call this having good ‘sleep hygiene’ and there are plenty of resources out there for people interested in that topic,” she said.

And although these resources exist it’s necessary for individuals to realize their behaviors may need improvement in order to seek out the additional help. Once there is a greater priority for good sleep, the time and effort toward changing the behaviors ingrained in our society can finally begin.

Alexis Morillo is a second-year journalism major who is just as suspicious of people that wake up to the ringtone Marimba as you are. You can reach them at amorillo@ithaca.edu