Home Day/Night The Sun and the Moon
Day/NightUpfrontweb-featured

The Sun and the Moon 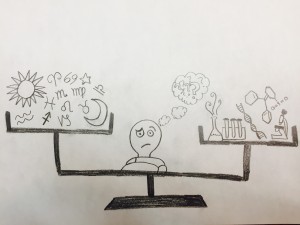 The idea that life could be explained by the positions of celestial bodies dates as far back as 1950 BC. The practice of astrology has long outlived those ancient times, and continues to be widely used in modern culture. It is used by individuals to look towards the future, help with decision making and provide internal insight, amongst other uses. Despite claims that the practice is not scientific, astrology is still practiced all over the planet.

According to The Blackwell Dictionary of Western Philosophy, astrology is the study of how the positions of stars and movements of planets have supposed influence on events and on the lives and behavior of people. While both fields have a focus on the planetary bodies, astronomy is different than astrology. ScienceDaily defines astronomy as the scientific study of celestial objects and phenomena that originate outside the Earth’s atmosphere. Astronomy uses various forms of science such as physics and chemistry.

Not everyone subscribes to astrology. In fact, the 2016 Study on American Fears from Chapman University revealed that only about 13 percent of Americans believe that astrology is real.

“It’s only in the past few hundred years that humans have considered themselves alone in the universe, ‘divorced’ from a connection with nature and the cosmos,” said Aurora Tower, an astrologer and horoscope writer for Cosmopolitan magazine. “For thousands of years, it was assumed, even by scientists, that we are not separate from nature and nature’s rhythms, but are a part of them.” 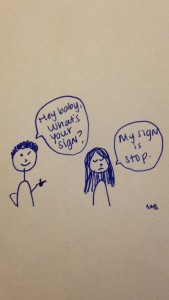 One way to connect to the cosmos is through horoscopes. Daily and weekly horoscopes are often printed in magazines and newspapers, and there are websites and apps dedicated to creating personalized horoscopes according to one’s zodiac sign. An individual’s zodiac sign is also known as their “sun sign,” which is determined by what position in the sky the sun was when they were born. The astrological sky is split into a “zodiac” wheel with 12 sections, which is why there are 12 different zodiac signs.

When Tower is writing her weekly horoscopes, she first examines the “aspects” for the week.

“Aspects are the geometric positions of the planets, the sun, and the moon — to see if they are having any interactions with one another,” she said. Tower then interprets what each aspect means for the 12 zodiac signs.

“The interpretations are based on traditional associations for each planet. Venus, for example, has always been associated with love and beauty. These associations are ancient,” she said.

Horoscopes, like the ones that Tower writes, are popular and are an easy way to be intuitive. Yet, they are often so vague that anyone can relate to them. This is explained by the Forer effect, which claims that individuals have a tendency to accept general statements as true to themselves without any real objective measurement. People will see what they want to see in a horoscope, and interpret the vague phrases used in a way that is meaningful to them.

Astrologer Nikki Harper, who has written for publications such as The Huffington Post, said: “They are for entertainment purposes, really. They provide a kind of cosmic weather forecast, if you like. Because of the way horoscopes are calculated and written — just one interpretation for the 12th of humanity with their sun in that sign — they are by default very generalized.”

Amy Jones, who started Spirit Comfort Astrological Counseling in Kew Gardens, New York, said the information in daily horoscopes is incomplete. “It refers only to the sun sign,” she said. “It doesn’t take into account the other planets in your chart, the houses, or the ways the planets in your chart modify each other. That’s different for all of us. So a daily horoscope will not give you the full picture.”

A natal birth chart can be used to further examine aspects of a person. The chart illustrates where many of the celestial bodies were positioned in the sky at the time of an individual’s birth, with the goal that the planets’ spots in the sky will give insight into that person’s character.

“There’s really a lot you can learn from your birth chart,” Jones said. “The planets and signs in a birth chart represent archetypes or symbols within us. We can express the higher or the lower possibility of everything in our chart, depending on our awareness and intention.”

Although astrology is used as a tool by astrologers and everyday people alike, it faces criticism from the scientific community. It is typically classified as a “pseudoscience” because it has some scientific aspects, but it is not typically regarded as a science.

David Helfand, an astronomy professor at Columbia University said: “Pseudoscience is defined as an enterprise that adopts the trappings of science without adopting the key attributes of science which include a reliance on carefully collected evidence, admission of the falsifiability of one’s theories, and the adoption of nature as the ultimate arbiter of what is a good model.”

The University of California Berkley’s “Science Checklist” also denies that astrology is a true science.

Yet some astrologers oppose this, saying the scientific basis of astrology is the gravitational forces on Earth from the Sun, the Moon and other planets. Therefore, these forces can be charted and made sense of through astrology.

Helfand disputed another common pro-astrology scientific claim, adding, “The argument that the moon raises tides of water and we are 60 percent water, so there must be some effect, is completely ludicrous. Tides are not limited to water; they affect everything.”

Harper feels differently. “No serious modern astrologer believes that the planets have a physical influence on people’s minds or bodies via gravity, waves or any other measurable scientific phenomena,” she said. “Instead, we think that what goes on in the skies can symbolically reflect and give us insights into what goes on in our lives.”

Conflicting viewpoints aside, “Mercury retrograde” is an astrological phenomenon that has been widely publicized. This phenomenon occurs during the three to four times a year that the planet Mercury appears to be moving backwards in the sky.

During this time, one might see a Tweet or a Facebook post complaining about how an email didn’t send correctly, how they got into an argument with a friend, or about how their coffee spilt all over their laptop because “Mercury is in retrograde!”

Jones offered up some advice to those who subscribe to the phenomena. “Mishaps during a retrograde can be incredibly frustrating, but they actually give us a chance to try a new way instead.”

“Retrograde periods also remind us to be more internal – to take a moment to breathe and center yourself before you act,” Jones said. “Whichever planet is in retrograde will show you an area where you can learn something new instead of operating out of habit.”

Is it just easy to chalk things going wrong up to forces out one’s control? Or does the direction Mercury appears to move in actually have an affect on our lives?

In Helfand’s point of view, the only effect the planets have on human lives is “someone seeing Venus bright in the evening sky and finding it aesthetically beautiful and/or being inspired by the fact that our species has evolved from slime molds on this pale blue dot and has come to apprehend the entire Universe.”

But one thing is certain: the skepticism around astrology is more complex than simply questioning if it is “real” or not. Regardless of its scientific validity, astrology will likely continue to have relevance in today’s turbulent society as people seek guidance and answers in an increasingly unpredictable world.

“Having a tool to see what we can learn right now and what actions we can take can be empowering, and comforting,” Jones said.

Rae Harris is a second-year journalism major that blames most of her problems on mercury retrograde. You can reach them at rharris3@ithaca.edu