Despite numerous television shows and films based on the Superhero-filled worlds of DC comics and Marvel in recent years, we have yet to see something quite like NBC’s Powerless.

Compared to the dour and realistic Marvel Netflix shows (Daredevil, Jessica Jones, Luke Cage) and the more straightforward action sci-fi DC comics shows on the CW, (The Flash, Arrow, Supergirl) Powerless is something else entirely. Not only does the show ditch the focus on super-powered people all together, but it is a half-hour sitcom.

Set in the fictional Charm City, located in the DC Comics universe, Powerless is a workplace comedy about a team of designers working at Wayne Security, a sub-division of Wayne Industries, owned by Bruce Wayne, also secretly known as Batman. The show’s lead Emily, played by Vanessa Hudgens (High School Musical, Spring Breakers), is an upbeat young new hire at Wayne Security. She has been tasked with leading the very unmotivated design team. The team, which consists of Teddy (Danny Pudi, Community), Wendy (Jennie Pierson, Funny or Die), and Ron (Ron Funches, @Midnight), specialize in making gadgets that protect everyday people from the collateral damage of superhero battles. Their boss, the obnoxious and elitist Van Wayne, played by Alan Tudyk (Rogue One: A Star Wars Story, Serenity), dreams of leaving the Charm City office and getting transferred to Gotham City to work with his cousin, Bruce. In the pilot, Van informs the team soon after Emily arrives that their office is being shut down due to lack of productivity. Emily takes this as her opportunity to show her worth and motivate her team. Much to the chagrin of Van, the team scrambles to put together a product that shows the worth of their department. 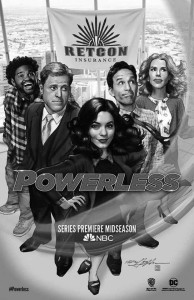 Powerless’ greatest strength is its connection to the DC universe. The passing mentions of characters such as Batman and The Flash in a very mundane workplace environment is a funny juxtaposition that hasn’t really been seen yet. Getting the perspective of the non-powered, everyday, individual in the superhero world works as a setup, however, the biggest flaw of the Pilot was that there wasn’t a compelling character in sight. For the most part, every character in this show has one side. One can’t expect a lot of character development in the first episode of the show, however, at no point in the episode does Emily break from being joyous, determined, and ambitious. These are important character qualities that we never see tested. When she is set back, she doesn’t react emotionally. This can also be said for the rest of the cast. Ron and Teddy are a funny duo, but at the end of the episode all I could tell you about them is the collection of one-liners they said, not who they were as characters. The show seems to prioritize its world and premise over its characters. This is working for the moment, as the setting is strong and the characters are funny in their roles. However, how long this will sustain a good show is uncertain. The most successful sitcoms tend to have a large cast of memorable characters. In Between Friends, How I Met Your Mother, The Office and The Simpsons, there are dozens of beloved characters. Powerless, so far, lacks the element that will give it long term life, but for now, I’m sold on episode two.