RAW FROM THE SAW – Oscar Who?

A breakdown of how the Academy Awards actually works

According to Hollywood Reporter, about 40 million people watch the Oscars each year. And in the weeks leading up to the ceremony, it’s almost impossible to check Twitter without seeing an argument about who will win Best Picture on the timeline. But the way that Oscar winners are selected is a lot more complicated and systemic than, “The Oscar goes to…” and “I’d like to thank The Academy.”

Who is The Academy? Although the actual members are kept top secret, there are approximately 6,000 members according to The Academy’s website, mostly based in the United States. These people are all involved in the film industry, as directors, writers, producers, etc., and must be working on the production of theatrically-released films. Within The Academy, there are several branches divided by role within production.

There is no application to get in. According to The Academy, “The membership process is by sponsorship, not application. Candidates must be sponsored by two Academy members from the branch to which the candidate seeks admission.” Additionally, anyone nominated for an Oscar is automatically admitted into The Academy.

Statistically, The Academy is extremely heterogeneous. According to The Atlantic, the Academy is 94% white, 76% male, and the average age is 63 years old. This makes sponsorship for women, young people, and people of color extremely difficult. This is also extremely important information to know when considering not only what gets nominated, but also what wins.

So what does get nominated, and how? Well, most people know that the Oscars ceremony takes place in late February, and the prime Oscar bait month is December. That’s not just a coincidence; it’s extremely calculated. According to the Academy, if a director feels their film has a shot for any Oscar nomination, it is typically released in December because that is when producers must submit an Official Screen Credits (OSC) form in order to be considered. If the film is at least 40 minutes long (excluding the short categories), has been screened in Los Angeles County, and has run for at least 7 days, it is put on the ballot.

It’s easy to imagine The Academy choosing its nominees by having all members gather around a huge table in a conference room, but with 6,000 members all across the globe, the selection process is done on a ballot. Members receive the ballots in the mail, and then are allowed to pick their top five nominees for each category. The results are tallied, and the responses with the most nominations become the official Oscar nominees.

While this process seems incredibly democratic, it’s a lot more complicated than The Academy’s website would have it appear. While it’s true that anyone that qualifies is able to appear on the ballot, receiving a nomination often comes down to popularity and connections. While indie films will occasionally receive an Oscar nod in one of the minor categories, it is no coincidence that the Oscars often include at least a few financially successful films in most of the major categories.

This is not to say that the films are not picked on merit. But think about the two Best Picture frontrunners for 2016: Moonlight and La La Land. Moonlight can be considered closer to an indie darling, a film that appeared mostly at festivals and then, as it began to become more critically-acclaimed and receive Oscar buzz, started to be shown in most major cinemas across the United States. However, La La Land was always a blockbuster, grossing close to one million dollars the opening weekend while also being heralded by most critics.

In terms of reviews, both films are considered to be incredibly worthy of the Best Picture win. But La La Land is a nostalgia piece directed by a previously nominated white director, while Moonlight is an indie film with a queer, black protagonist directed by a black man. These factors are central to making Oscar predictions, because the demographics of The Academy matters.

Once the nominees are chosen, the winners are selected in a very similar process. The Academy members have two weeks to pick their choice for the winner in each category, and then the polls are officially closed. The results are calculated in secret by the historic PricewaterhouseCoopers accounting firm. Interestingly enough, it is not required that every academy member sees every film nominated; therefore, it’s accurate to say that the votes are normally skewed in the more mainstream, financially successful films’ favors. This goes back to the question of La La Land versus Moonlight: Are the majority of old white guys going to take the time to see a love letter to old movie musicals or an indie coming-of-age drama about a black teenager?

While the Oscars have come a long way since its first ceremony in 1929, which was basically just a fancy dinner, the awards have been chosen the same way for the past 88 years. While it’s encouraging to see films like Moonlight get nominated, it’s the La La Land’s of the world that tend to succeed under this system. So when the distinguished actor in the designer suit stands on stage and says, “The Oscar goes to”, it’s important to remember how these winners were chosen, and how that system benefits movies that fit within the status quo. 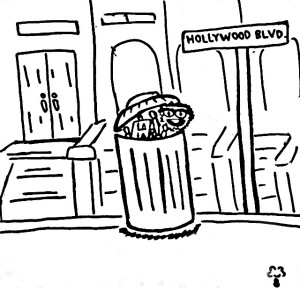 Alex Coburn is a first-year cinema and photo major who enjoys critiquing the Oscars. You can reach them at acoburn@ithaca.edu.