Sorry, Garden State and Clerks, but I’d like to nominate Paterson to be the official State Movie of New Jersey (should such a title ever exist).

In Paterson, Adam Driver is a man named Paterson who drives a Paterson bus in the city of Paterson, New Jersey, and it’s unknown as to which of these many Patersons the title refers. In terms of story, there isn’t much to speak of. The film is a simple but structured week-in-the-life of a bus driver. There is hardly any conflict, which makes for a very relaxing and calming viewing experience. Refreshingly, there are few stakes to speak of, and the tensions that do surface are more like ocean ripples than massive tsunamis of opposition.

The film is directed by veteran independent filmmaker Jim Jarmusch, that director whose name you’ve definitely heard before but whose movies you haven’t seen. And that makes sense — though he’s been working since the ’80s, Jarmusch has always kept himself in that independent film bubble. 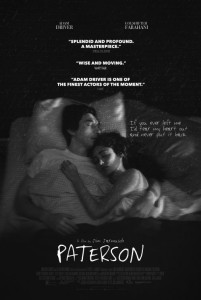 It’s hard to imagine the same level of restraint being shown by a less experienced director. Jarmusch’s Paterson is a quiet breath of life; it’s gentle, deep and poignant in the truth it commits to camera. While the film deals in the daily grind of its bus driver’s life, he’s the kind of guy who doesn’t see it as a grind. He’s a poet at heart, so every day presents a new possibility.

He wakes up next to his wife, Laura (Golshifteh Farahani), and she usually relays to him her dreams from the night before. He walks to work, drives along his daily route, and writes some poetry during lunch. When he gets home, he eats dinner with Laura and walks their troublesome dog Marvin down to the bar, where he has a single beer, chats with the patrons, and then leaves. From this everyday beauty, Jarmusch squeezes the charm and romance of Paterson’s life.
Driver is subtle and friendly, a capable leading man — he always has more on his mind than he lets on, and Farahani is eccentric and bubbly in all the right ways. The supporting players are excellent too, particularly Barry Shabaka Henley as the nostalgic bartender, and Moonrise Kingdom’s leading kids, Jared Gilman and Kara Hayward, cameo as two young Jersey anarchists.

As Paterson’s central duo, Driver and Farahani are wonderful together. Their lives aren’t embellished or dramatic, they’re just human — in many ways, Paterson is to the middle-class everyman what La La Land is to privileged white people living in Los Angeles. It’s infinitely more relatable, and there’s something in the film that speaks to everyone. In this world of rising tension and global unrest, we need a quiet reminder of the wonder of everyday life to quench the flames inside us.