The Politics of Pumpkin Spice

An exploration of the drink we love to hate

It’s time. Heaps of concentrated sugar delicately mixed with warm, frothy milk fat, topped with an enchantingly addictive blend of caffeine, cinnamon, salt, sugar and consumerism; the pumpkin spice latte has made its 13th annual appearance in Starbucks around the world this fall. Besides being characterized as the glimmering orange drink paying homage to the equally decorative gourd, the pumpkin spice latte (affectionately known as PSL) is Starbucks’ most effective contribution to the season of autumn, for better and for worse. 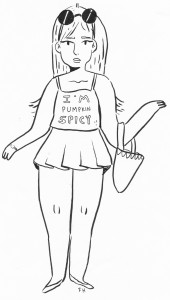 Without much effort, the concept of “pumpkin spice” has infiltrated public consciousness, inspiring different products ranging from premium scented candles to craft beer.

The popularity of the pumpkin spice latte can be attributed to Starbucks’ savvy advertising that takes advantage of natural associations with autumn pleasures. Capitalizing on fashion and trends is what might be behind the infiltration of pumpkin spice in the last couple of years, said Michael Krondl, author of “Sweet Invention: A History of Dessert.”

“Foods go in and out of fashion and nailing down exactly why can be challenging,” he said. “My guess is that Starbucks and others were looking for a marketing gimmick for the fall and seeing the increased popularity of Halloween, looked for a flavor to complement the holiday.”

Marion Nestle, the Paulette Goddard professor of nutrition, food studies and public health at New York University, said food companies are desperate to get people to buy their products and are always trying to come up with something new that will sell.
“It’s the current fad,” she said. “I’m guessing it won’t last more than a year or two.”

Yet, the success of the PSL is not just indicative of its frank deliciousness and the brilliant advertising by Starbucks. Part of its appeal has to do with the over-the-top embrace by its consumers, making it a cultural icon. The PSL’s success demonstrates collision between 21st century tools and the creeping entanglement between consumerism and identity, Katie Hoffman, founder of the lifestyle blog Sass & Balderdash, said.

Given that more technologies are available for individuals to share and be visible, social media has made the connection between consumer culture and identity more nuanced and difficult to separate.

“Before Facebook or Instagram or Snapchat, the notion of keeping up with the Joneses was a lot more ambiguous … speculation about what the Joneses had was based on our own insecurities, but now social media lets you see every aspect of the proverbial Joneses’ lives,” Hoffman said.

While consumer culture has been part of society previously, the PSL is an exceptional case of consumerism being adopted conspicuously to be showcased to others as an identity. In “The Perilous Whiteness of Pumpkins,” authors Lisa Jordan Powell and Elizabeth D. Engelhardt raise the question of the season: “Why did PSLs become the symbol of basic white girlness? Why did they stick even more than UGGs, yoga pants or scented candles?”

Powell and Engelhardt propose the use of pumpkins in popular culture reveals deep racial and class codes in the marketing of food and flavor. Specifically, they describe how the term “basic bitch” has been coined in the PSL cultural movement as a stereotype tethered to discussions about white female identity and consumerism.

A basic bitch is most often thought to be a white, middle-class woman, whose greatest cultural reproach is wearing leggings as pants, Hoffman said.

However, the term has deviated from its original derivation and has evolved through contemporary conversations, Emma Teitel — a columnist at the Toronto Star who specializes in writing about women and LGBTQ+ issues — said.

“The stereotypical basic bitch originated in hip-hop by black folks, but we now think of it in reference to white girls in cultural markers — UGG boots, high waisted shorts, iPhones,” she said. “At its heart, basic bitches have an unapologetic embrace of mainstream culture and consumerism.”

However, this “unapologetic embrace” comes with overt messages of privilege. Powell and Engelhardt write about how the pumpkin spice latte takes the evocative word “pumpkin,” and attaches it to something that is artificially constructed in its nature. They note that prior to Fall 2015, the PSL did not actually contain any pumpkin, a jarring contradiction considering the popularity of the beverage.

The result is that PSLs are an abstraction far beyond the original pumpkin. Often rationalized as an innocent celebration of fall, “basic bitches” perform their consumption through showcasing the artificially constructed PSL as a marker for the organic season. This action expands beyond highlighting an individual object, going one step further to validate a cultural attitude.

“Because we’re already so entangled in each other’s lives, liking pictures and tagging, wanting to be a part of something is more important to us than ever before — even if it can carry potentially negative connotations,” Hoffman said.

While the advent of pumpkin spice has been easily brushed off as a “basic” fad in recent years, it is more accurately a rebirth, as the pumpkin has a deeper symbolic history in mainstream culture. As a fruit, ingredient and a symbol, the pumpkin is meaningful in American culture, said Emily Contois, a PhD candidate in food studies at Brown University.

Perhaps the first mention of pumpkin spice was in what was widely considered to be the first cookbook in the United States. Published in 1796, “American Cookery” attempted to create a uniquely “American identity” through food. In it, the recipe for “pompkin pudding” mentions the same ingredients found in pumpkin spice: molasses, ginger and allspice. More importantly, though, its placement in the cookbook demonstrates that pumpkin spice since its inception has coincided with traditional American values.

“It’s linked to nostalgic notions and national values around nature, the agrarian dream and small family farms,” Contois said. “Pumpkin spice taps into this historical meaning — and its deep resonance might be part of why pumpkin spice products are so polarizing, so widely embraced and so vehemently abhorred.”

Whether consciously or unconsciously known, the prevalence and influence of the pumpkin in American food culture emphasizes the connection between tastes and the symbolic political nature of food. On a macro scale, food trends can serve as markers of identity, social group and status, Nestle said.

In a globalized world, what people choose to consume are specific to the cultures and subcultures that people live in and engage with, Krondl said. In short, “Tastes are never just tastes.”

With respect to pumpkin spice, the limited-time offer can mimic the pattern of rhythm and seasonal eating, Contois said. “Pumpkin spice products seek to reproduce the thrill and ritual of natural seasonality, but through the marketplace and broader rhythms of consumer culture,” she said.

However, the artificial nature of replicating such rhythm is amplified when our global food system often supplies us with whatever we want, when we want it. The thrill of seasonal eating is lost through the monotony of having ingredients readily available, she said.

“Even though many pumpkin spice products don’t contain pumpkin, it matters that pumpkin is in the name, as it conjures the natural bounty of the autumnal harvest and its connections to the land that are both nostalgic and nationalist,” Contois said.

The satisfaction that is gained from consuming and displaying a time-exclusive pumpkin spice latte as opposed to a year-round latte brings with it not only faux-synchronization, but also a status symbol for group identity.

By marketing the pumpkin spice latte as an urgent limited time only offer, consumers feel as though they are partaking in an exclusive act just by ordering one, Hoffman said.

Yet, there is a distinction between simply drinking a pumpkin spice latte because it tastes good, and buying one as a status symbol, said Sasanka Jinadasa, capacity building and resource manager at HIPS — a sexual violence reduction advocacy group — and writer for the literary and activist blog Black Girl Dangerous.

“It’s concerning if you get a pumpkin spice latte as a status symbol,” she said. “When this happens, it’s important to have conversations that integrate the class privileges that are inherent in this consumption.”

Starbucks’ products themselves are items of affordable luxury, communicating a specific class distinction. When a pumpkin spice latte costs at least $4, only some can justify spending so much money on a beverage, no matter how enticing.

When calling someone out as a basic bitch, one is alluding to perceived privilege, Hoffman said.

Despite the entanglements of consumerism and identity in “basic bitches,” some argue that calling someone basic is a deflection from the fear of how capitalism begets conformity.

In her piece published by Buzzfeed in 2014, media studies scholar and cultural critic Anne Petersen writes about how the stereotype of the basic bitch has been used as a mechanism to divert attention from the creeping embrace of consumerism. She proposed that stereotypes are used with the most hostility when those wielding them are trying to distance themselves from the group they detest — even though they might be doing something similar.

Averting conversations about larger issues in favor of perpetuating another misguided stereotype is hypocritical. “It’s not fair to deflect and criticize one person or a group of people when this is a problem that is much more widespread,” Teitel said. “Everyone adopts a mode of cultural being. You can be basic on your own.”

“Is there not something inherently misogynistic that a basic bitch commonly refers to a woman?” she said. “My own boyfriend enjoys pumpkin spice lattes, but even if he and his fellow male PSL-enthusiasts descended upon Starbucks in droves, would the term ‘basic pricks’ become part of our language?”

Exploiting this inherent contradiction, the unapologetic character of the basic bitch has, in some circles, reclaimed the term as a means of empowerment against misogyny. Through the rise of social media and Internet culture, people have the opportunity to subvert structures in a new way, Teitel said.

“What the Internet has done has allowed things to be ironic, even the popular cheerleader type,” Teitel said. “What I like about [the basic bitch] is that she is trolling hipsters in a way through embracing her basicness. … She pokes fun at the trend and pushes back.”

Nevertheless, conflating pumpkin spice lattes with some level of seasonal superficiality is a genderless action, Hoffman said.
“No matter how delicious a pumpkin spice latte is on a cool October morning, we’re all being manipulated.”

Michele Hau is a third-year culture and communication major whose favorite drink to order at Starbucks is a water cup. They can be reached at mhau@ithaca.edu.