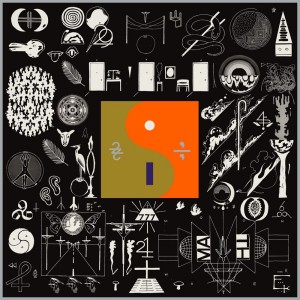 For the first time in five years, Bon Iver has released a new album. From the song titles and album cover alone it is clear that 22, A Million is an entirely different animal from what Bon Iver has typically produced. The titles contain cryptic words and symbols, and the cover art reflects this in the shapes and typography that are more akin to hieroglyphics than to the English alphabet. The surface detail serves as an appropriate preview for the strange, highly autotuned collection of songs that appeal to the senses through stimulating digital sounds that reverberate at the core.

22, A Million plays with the idea of real things made from fake things, as is clear with the heavy use of autotune to create sounds that establish feelings of nostalgia or of being out in nature, and has the captivating lyricism of any of Bon Iver’s older albums. Vernon makes use of neologism and coins the word “paramind,” which seems to mean “beside the mind.” This evokes feelings that are nothing short of surreal, which plays further into Bon Iver’s liberal use of autotune to create sounds that sound real, but are not quite there.

“22 (OVER S??N)” acts as an introduction to the second track, “10 d E A T h b R E s t,” that enters as a lively change compared to the mellow opener. This song is mostly autotuned, but the artificial sounds seem to mimic natural sounds, like raindrops and a crackling echo in Justin Vernon’s voice.“#29 Strafford APTS” is one of the least autotuned tracks, and is the most consistent with typical Bon Iver style. However, it is still consistent with the rest of the album, and features a scratching noise that is supposed to give the song an authentic, aged sound.

The rest of the album continues to flow through loftily tuned and altered melodies, interspersing tranquil tones with more melodic mixtures of varied instruments and vocalizing. “____45____” highlights Vernon’s vocal talents the most and is a strong resolution for the album which closes with “00000 Million”.

While not lacking in vocal beauty, “00000 Million” is more repetitive and scaled back in a way that isn’t unappealing, but is somewhat boring. It continues with the same structural pattern until the last five seconds of the song, where it leaves the listener in total silence. However, Vernon’s final words on this track, “Well it harms me, it harms me, it harms/ I’ll let it in,” allow the song to end on a meditative note.

Overall, this album seems to be a complete aberration from Bon Iver’s typical solo style, but upon closer listening, it is clear that this is not the case. 22, A Million seamlessly mixes the old with the new in a manner both is jarring and refreshing. Vernon’s vocal style on 22, A Million remains similar to that of For Emma, Forever Ago and Bon Iver. All three of these albums feature the unique acoustic vocal style that we have become familiar with when listening to Bon Iver. However, 22, A Million gives the band’s folksy singing and guitar a more modern update with the addition of electronic elements. For example, the vocals and backing instrumentals, notably the (snare?) drums in “666+” sounds remarkably like “Perth” off off Bon Iver, but with the addition of distortion and auto tune that twists Vernon’s unmistakable voice just enough to give it a new edge without making it totally unrecognizable.