RAW FROM THE SAW: The Hollars 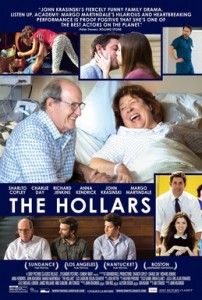 John Krasinski must be the most likeable guy in Hollywood. For his second feature film The Hollars, Krasinski has assembled the largest, most ridiculous cast of celebrities outside of one of Jack Nicholson’s wild, drug-fueled L.A. parties.

In The Hollars, Margo Martindale and Richard Jenkins play mom and pop to Krasinski’s John Hollar and his brother, Ron, played by Sharlto Copley — a wonderful departure from form, as Copley has been on quite the run of playing lunatics in The A-Team, Elysium, Hardcore Henry and next year’s Free Fire.

The estranged family is brought together by the old parent-gets-surprise-cancer cliché when Martindale’s matriarch collapses one afternoon with a curling iron in her hand. Returning to his quiet hometown after years trying to make a living in the Big Apple with his pregnant girlfriend Rebecca (Anna Kendrick), Krasinski’s John is reintroduced to his high school crush Gwen (Mary Elizabeth Winstead) and her husband Jason (Charlie Day).

Yet the movie still has enough time and energy to throw in Fresh Off the Boat’s Randall Park as Mrs. Hollar’s doctor and Josh Groban (because why not, really?) as a cheeky but well-meaning reverend who’s moved in with Ron Hollar’s ex-wife. Either Krasinski has dirt on every actor in the industry or everybody just really, really wants to get into John’s Krasinskies.

As director, Krasinski does a wondrous job of navigating his actors through the emotional ups and downs of the Hollar family’s predicament, and he does a fine job of pacing the jokes in between. There’s not a wasted moment in the movie, and the script lets every cliché become a new opportunity to get a laugh. His long and vivacious career on “The Office” pays off here, where Krasinski feeds his cast with plenty of hilariously awkward exchanges and blank stares into the middle-ground.

But he’s also really careful with the film’s more tender scenes and moments. Jenkins is outstanding as a father figure who crumbles before his wife’s eyes into a blubbering heap of a husband, and Martindale’s ability to control her character’s shaky emotions and channel them into bravery is amazing to watch.

And while the cancer angle might make this movie ripe for tear-wringing moments, The Hollars never veers down that path. Krasinski’s intelligent direction and Jim Strouse’s smooth screenplay serve up the self-awareness and attention to comedy that keeps this film away from emotional manipulation. Never before has a dramedy so embraced the conventions that define the genre while it works so hard to tear them down and make you laugh alongside these pained and troubled characters.