RAW FROM THE SAW: Southside with You 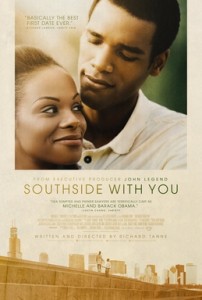 The visual retelling of a presidential romance before the subjects have even vacated 1600 Pennsylvania Avenue seems daring at best and a parody at worst. Boy meets girl, girl refuses to date, they get ice cream and fall in love — it’s a good story, sure, but the audience knows the outcome already. Southside with You, beautifully directed by Richard Tanne, starring Tika Sumpter (Gossip Girl, Ride Along) and Parker Sawyers (Zero Dark Thirty), somehow captures the magical atmosphere of a perfect first date while showing two young people who would grow up to become the President and First Lady of the United States.

The film opens on a sunny day in the summer of 1989, as we see a young lawyer (Sumpter) getting ready for an outing she insists is not a date. The new kid at her law firm (Sawyers) has other plans. The shots of Barack Obama driving to pick up Michelle are downright exciting; he smokes, he listens to Janet Jackson, his car is falling apart but he doesn’t care: he has a date. She agrees to go only to attend a community event together as colleagues — soon realizing Barack has planned an afternoon together beforehand. An art exhibit nearby leads to conversation about a mutual favorite artist and common values. Barack gives a speech in his old neighborhood from before his Harvard days, showing Michelle and the audience a glimpse of how the golden boy turned into the powerful public speaker he became.

Tellingly, Michelle and Barack were often antagonistic yet compatible; even as they fought like two lawyers, one could see how much they challenged each other to be their best respective selves and hints of their future America’s dynamic duo. The other dramatic tension comes from danger of higher ups at their law firm seeing the two on a date; something that seemed a little too Shakespearean to be true to life. They finally get to the movie — a showing of Do The Right Thing.

Beside the Aristotelian time frame (sort of: he thought drama should take place in one day, with one plot, in one place), many of the elements that made Richard Linklater’s 1995 Before Sunrise a masterpiece are used to Southside with You‘s advantage. Before Sunrise follows two strangers who meet on a train and walk around Amsterdam. The excellent performances of the enigmatic leads truly anchor this film; no small feat when portraying public figures without falling into caricatures. Even ordinary small talk is enchanting because of the pair’s on screen chemistry, and speeches that could seem grandiose for the movie are grounded by Sawyer’s delivery. He loves pie, she loves ice cream.