RAW FROM THE SAW: Morris from America 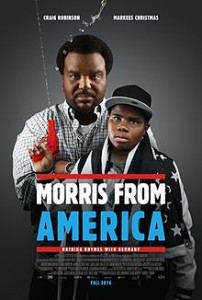 Picture that one person who smiles just a bit too wide, for a bit too long; the person who laughs at a joke just plain too loud. Cue the uncomfortable cringe. Chad Hartigan’s Morris from America held all of the potential and grandeur of a quirky and playful spin on the common story of adolescence with its own unique twist, yet in the end it just felt like it was trying a bit too hard.

The film tests the waters of identity, racial prejudices, cultural disconnects, and the all too familiar struggle of adolescence that every adult remembers in the story of Morris Gentry (Markees Christmas), a thirteen-year old African-American kid living in the foreign world of Heidelberg, Germany. Morris starts the film with only the company of his single father (Craig Robinson), the death of his mother lurking just in the shadows for the entire length of the movie. Yet after the well-intended nudging of his German tutor, Inka (Carla Juri), Morris suddenly finds himself nudged into the social warzone of youth.

Morris meets Katrin, a troubled and wild 15-year-old girl that will predictably crush his heart, and the developing of this odd friendship challenges Morris as he is faced with the bullies and cultural divides that come with being an African-American boy living in Germany while also gaining a greater sense of worldliness and understanding through chasing after this enchanting German girl.

Morris’ passion for rap music and the light-hearted inclusion of it throughout the film works well with the heartwarming story Hartigan unravels. Morris wants to become a rapper and even gets to perform a few times, much due to Katrin, and these peak scenes do strike a chord for the audience. Yet, more than once, this building energy suddenly falls into awkward lags, just narrowly missing the mark. The soundtrack grasps this apparent interest in rap music and takes off running with it, allowing most moments in the film the accompaniment of some steady beats. This is a great example of the over-eagerness the movie unfortunately falls into. After the fourth rap, it’s safe to say that the point has been made and its use turns a bit stale.

A nice chemistry between father and son gives the film a breath of life, and the pair play nicely off of each other. The smoky party scenes and creative camera angles doused in the flashing of colorful lights shown as Morris ventures into Katrin’s thrilling social life offer an appealing cinematic element as well. It’s an offbeat film that teases with the line of comedy and drama, drawing out playful laughter from the audience while also holding moments of cringe-worthy tension as we watch Morris fall into the all too common mistakes of youth.

Watching it was certainly worth the price of admission, although leave any towering expectations at the door and just enjoy the movie for the moments that keep the beat.