RAW FROM THE SAW: Equity 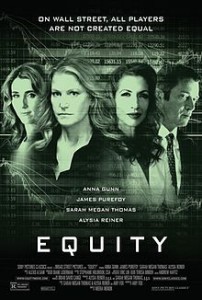 It seems like movies about the business world are the new Golden Ticket to the Oscars, from The Big Short to The Wolf of Wall Street. They’re often the films no one understands/wants to see but everyone pretends to understand/pretends to like. Equity, directed by Meera Menon, is a film about the business world. In fact, it even falls into the financial thriller category, which can indicate that a film will be clinical, dry, and devoid of human connection. But in Equity, although the plot revolves around an investment banker’s attempt to make a new company financially viable, it also includes the emotional appeal that other financial thrillers lack.

The big draw for Equity was that it has a nearly all female cast and production team. Starring Anna Gunn as the tough-as-nails investment banker Naomi Bishop, Alysia Reiner as white collar prosecutor Samantha, and Sarah Megan Thomas as wide-eyed, personable Erin Manning, this film completely revolves around the lives of women in business. The few men that do show up function almost entirely to avoid the pitfall of the “sexless business woman” trope. This was such a breath of fresh air and totally deviated from the financial thriller tradition of a cast dominated by white guys in suits.

However, Equity suffered from a lack of any discernible aesthetic. Just because a film is about the business world doesn’t mean it has to entirely lack any sort of visual style. The Wolf of Wall Street is proof positive that it doesn’t have to be this way. Equity, on the other hand falls into the trap of sacrificing aesthetic for storyline. Sure, the cinematography was crisp and skillful, using long shots to emphasize how powerless Naomi feels towards the end of the film contrasted with low-angle shots to put Naomi in a position of power at the beginning, but that’s not enough to make a film visually interesting. The clinical, modern production design seemed too cliche to be compelling. Aesthetically, Equity feels like someone read a film book and followed literally every rule on how to make a technically sound film without taking any risks to further the mise-en-scéne.

But it’s semi-forgivable that it’s not stylistically compelling, because Equity managed to portray the constant workplace sexism that women face without hitting the audience over the head with it. Never in the film did Naomi say, “This is because I am a woman,” but viewers know that’s how she felt and knew that that was the case. The film uses common situations of workplace sexism so artfully that viewers get the message without it ever being explicitly stated, as is so often the case in most “issue” films. Equity understands the constant bullshit that women in the business world face, and that’s 100% to do with the fact that there was a mostly female production team.

Equity is “just another financial thriller” in the best way possible: it never makes a big deal of that fact that an all-female financial thriller is revolutionary. Instead, it proves to audiences that you don’t need middled-aged white men in suits for a movie about the business world to be legitimate. Equity gives us a new look at a familiar genre, and it’s perfect to see with all the kickass women in your life.