Only 4.2 Light Years Away

Possibility for life on Proxima B

Researchers have officially confirmed the years-in-the-making discovery of exoplanet Proxima B, a roughly Earth-sized planet that orbits Proxima Centauri. Proxima Centauri is a red dwarf star that is 4.2 light years away from our own solar system, which is close on the cosmic scale. What is most exciting about this discovery is that Proxima B is orbiting in the “habitable zone” of Proxima Centauri. This has led to many hopeful and curious inquiries about whether or not the planet could hold forms of life.

Scientists have been searching for planets orbiting Proxima Centauri for over 15 years. They do so by using equipment called Ultraviolet and Visual Echelle Spectrograph (UVES) and High Accuracy Radio Velocity Planet Researcher (HARPS), both of which are installed on telescopes run by the European Southern Observatory in Chile. These instruments detect shifts in star’s movement caused by gravitational pulls of orbiting planets which can alert scientists to new planets. The first signs of Proxima B were found in 2013 but the data was not convincing enough. Due to this, scientists launched a publicly funded research campaign called the Pale Red Dot. It was dedicated to focusing on the confirmation of this planet’s existence. This team focused HARPS on Proxima Centauri every night from Jan. 19, 2016 through March 31 of this year. This new data combined with previous data led to official confirmation of the planet.

The data indicates that Proxima B is only about 1.3 times bigger than Earth, which suggests the planet to be a rocky one. The planet is only 4.7 billion miles from the red dwarf Proxima Centauri and it completes an orbit every 11.2 earth days. Due to this fact, it is likely that one face is constantly facing Proxima Centauri. Our own Earth is 93 million miles away from the sun. Due to its tight orbit, the planet is within the habitable zone of the star because red dwarf stars are relatively cool. The habitable zone is the area surrounding the star that would allow for water in it’s liquid state to exist on the planet’s surface.

This could mean that there would be a possibility for life but the likeliness of habitability is hard to say and many astronomers remain skeptical. Ithaca College Professor of Physics and Astronomy, Shoshe Cole believes that there are “almost certainly” no intelligent forms of life on this planet. This could be possible as Proxima Centauri is still a relatively active star that emits flares of radiation. 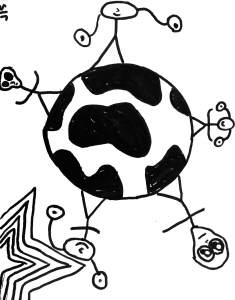 These bursts of specifically x-ray radiation then hit Proxima B, which could hinder life as the flares create an obstacle for all forms of life. One issue with such issue with waves of radiation is it leads to the possibility of atmospheric erosion. Lisa Kaltenegger, Director of the Carl Sagan Institute at Cornell University commented, “If [the planet] has an ocean, then the best bet [for life] is in the water.”

Despite this problematic factor, Cole has a different method of arguing against possibilities for intelligent life on the planet.

“Modern humans have only been around hundreds of thousands of years and modern radio has only very roughly been around 100 years,” she said.

Since it took so long for humans to evolve on earth, which had seemingly “perfect” conditions, it would only be logical to say that it could take intelligent forms of life elsewhere at least as long, if not longer, to evolve as well. Therefore, this decreases the possibility of intelligent life on any other planets.

That doesn’t mean that she doesn’t think it’s possible for other forms of life to inhabit the planet though. “If there were were life, the chances are they would be single celled,” Cole added.

For such organisms to exist, the amount of radiation that the planet gets would be a problem to be solved. One way this could be avoided is if the planet had a very strong ozone layer. Otherwise, adaptations within the life forms would be the most likely to occur. An example of such an adaptation would be to remain underground for long periods of time. If the planet had an ocean or any body of water, then this would be a likely area for life as it would provide adequate protection for some life from harsh radiation.

NASA scientist Paul O. Hayne, who works within the Jet Propulsion Laboratory in Pasadena, CA, also agrees with this opinion as he finds that what they know about the host star wouldn’t allow for intelligent life. Proxima B is almost certainly “tidally locked,” he said. “It points the same face to its star all the time. That would lead to very extreme temperature gradients between the day and night hemispheres. The planet should also be quite cold due to the small size and low brightness of its host star.”

One of the best ways to determine whether life exists on the planet would be to visit the planet with probes. Earlier this year, Breakthrough Initiatives announced its project “Starshot.” It aims to send miniature probes to Proxima Centauri and now with the recent discovery of Proxima B, scientists are even more eager to launch it. The project plans on sending thin probes at a speed 20 percent of the speed of light. Such probes would be equipped with thin sails which would capture energy from a powerful earth based laser. This laser would accelerate the probes and allow them to reach Proxima Centauri in 20 to 25 years. The full scale apparatus still needs to be built and is at least 20 years off. While it is unclear how much information the probes would be able to send back as they are so small, any data taken would require an estimated time of 4.22 light years to reach earth again. It is difficult to predict what type of technology would exactly be on the probes as technology will likely continue to advance and continue to get smaller.

Cole seemed skeptical such advancements in the near future would be futile though. As Cole explained, “We wouldn’t be able to send them commands once they got there (which is more or less how we direct the robotic probes we send to other planets in our solar system) because it would take our signal 4 years to get to them, so they would need some way of figuring out where to aim their instruments on their own, which is feasible with the technology we already have.”

While she thinks it would be very inspirational to see photographs of Proxima Centauri’s solar system, she believes that not a lot of data would be able to be sent back to Earth because of how much power it would take to send a strong enough signal back to Earth.

Hayne, however, has a much more hopeful view regarding innovation and advancements. He believes that if we invest enough in technology such issues can be overcome. He states that it “[…] just takes leadership and the investment of a large group of people to make something like that happen.”

Ari Ashby is a sophomore writing major ready pack up and move to Proxima B. You can email them at aashby@ithaca.edu.