Things the Kardashian’s get right

Whether one would wish to admit it or not, the Kardashian family is an integral part of popular culture in the United States. However, it wasn’t always like this. Their rise to stardom began long before the existence of their social media following, cosmetic lines, modeling careers, or family reality show. The Kardashian name became more well known when Kris Jenner’s first husband (and Kourtney, Khloé, Kim, and Rob’s father) Robert Kardashian gained attention for defending O.J. Simpson in his notorious 1994 murder trial. After his death in 2003, his ex wife Kris and the Kardashian children inherited his wealth and slowly started to inch their way into the spotlight with Kim working as a personal stylist for celebrities like Lindsay Lohan and as a closet organizer for Paris Hilton. Although one of their most well known claims to fame (or notoriety), is the leak of Kim’s sex tape with singer Ray J in Feb. 2007, the same year, just eight months after the leak, their reality show Keeping Up With the Kardashians was announced. Since then, they have appeared on television screens and tabloids everywhere and are constantly under the public eye. Their fame, though it may not be possible to pinpoint the exact reason they became the big public figures they are, has led them to be judged on each move they make but has also given them the platform to have their opinion on important issues to be heard. It’s fair to say that even if their mistakes are reported on more often than not, there are some things that the Kardashians really aren’t wrong about.

1. The dialogue they promote about the Armenian Genocide
The Armenian Genocide, which took place from 1915 to 1918 was the mass killing of the Armenian people in Turkey by the Ottoman Empire during World War I and was continued from 1920 to 1923. Years later, although the United Nations Convention on the Prevention and Punishment of the Crime of Genocide characterized genocide as the “acts committed with intent to destroy, in whole or in part, a national, ethnical, racial or religious group”, because this definition was accepted thirty years after the Armenian Genocide took place, the mass execution of Armenian people that took place is not globally accepted as a genocide. The Kardashians, who identify as proud Armenians, do not shy away from this controversial topic and even dedicated an entire episode of their show to outline their travels to Armenia for the first time to learn about the harsh history of their people. Kim even published an open letter with Time Magazine that talks about her experience in Armenia writing, “The whole point of remembering the genocide is to make sure it doesn’t happen again. A million-and-a-half people were brutally massacred, and a country can just pretend like it never happened? I don’t think that’s right.” The family also took April 24, 2015, the commemoration date for 100 years since the genocide took place, to post photos on their social media accounts paying tribute to the victims. Just recently on Sept. 20, Kim continued her outspoken advocacy for the formal recognition of the genocide by purchasing a full page advertisement in the New York Times in response to an ad posted in The Wall Street Journal that denied the genocide, merely referring to it as a “1915 tragedy” between Turkey and Armenia. Although their publicized stances on all political controversies may not be correct, this one they’ve got totally right.

2. Kim’s stance on body positivity
Body positivity is a topic that is constantly talked about and analyzed, and as public figures, Kim and Khloé Kardashian are leading by example. Kim, who is known for her selfies, some of which get deemed risque, owns her body and decision to share photos of herself without the expectation of getting objectified. She even published a book, Selfish, which was made up of nothing but photos she took of herself. Even with all of the criticism leading up to its release, it still sold 32,000 copies in the first three months. Kim also faced backlash this past March, after she posted a nude photo censored with tasteful black blocks and the caption, “When you’re like I have nothing to wear LOL.” This isn’t anything too out of the ordinary, seeing as Kim has done nude photo shoots in the past, the most well known being her full frontal shoot with Paper Magazine. She promotes messages of body positivity by being comfortable enough in her own skin to pose for these photos even with the high likelihood of fellow celebrities not agreeing with her. 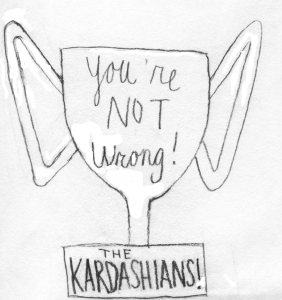 Among such celebrities are Piers Morgan and Bette Midler, both of which she called out on Twitter when they made jabs at her March photo. On the other hand, young female starlets find Kim’s openness about her body to be encouraging an open dialogue about the sexism that occurs in Hollywood. Ariel Winter of Modern Family stood by Kim’s decision to share this photo. According to E! News, she supported Kim in an interview with an Australian radio show. “I think that everybody’s body should be celebrated no matter what it is and I think that it’s great that she’s so comfortable with herself,” said Winter. “She’s able to post out there what she wants to post and if she wants to post a nude selfie, she can.”

3. How Khloe promotes her fitness routines
As for fitness, Khloé constantly promotes routine exercise and healthy, nutritional choices. Unlike some of her sisters, she made this lifestyle change for personal reasons and to improve her own quality of life along the way. She has admitted that her love for working out started as a coping mechanism for her problematic relationship with ex-husband Lamar Odom. Since then, it has become part of her daily schedule, and she posts photos and videos of her exercising for all of her following to see. One such video was posted on Instagram about two months ago with the caption, “If I can do it. You can do it. It all starts with day one! It’s a lifestyle now.”

4. Kendall has broken into the modeling industry on her own
Breaking into the modeling industry is hard when you’re an unknown face, although it may be harder when you have a preconceived reputation before walking into meetings with any potential employers. For Kendall Jenner, the latter was a reality, and in an interview with Entertainment Tonight she explained how her family name did not always give her the upper hand when looking for modeling opportunities. In fact, more often than not, it had the opposite effect. “You have no idea how many doors closed on me and how many adults were either initially reluctant to take a chance working with me or who outright laughed at me,” said Jenner. In 2011, she was the face of ads and runway shows for smaller brands like Forever21 and Sherri Hill but since then she has broken into the high fashion world, working with designers like Marc Jacobs, Givenchy, and Calvin Klein. Her resilience in trying to make it in the industry has paid off, quite literally, and according to Forbes she was added to their comprehensive list of highest paid models in 2015 ranking at number 16 out of 21. It is thought that her large social media following makes her prime model material for campaigns and advertisements since she can post about them on social media with the guarantee of millions of her fans seeing them.

5. They remain relevant through their entrepreneurship
Even if the origin of their fame cannot be pinpointed completely, they remain relevant on their own. Their show Keeping Up with the Kardashians is now on its 12th season, but the family has also made their way into the business world, not just television entertainment. Kourtney, Khloé, and Kim started DASH clothing boutique in 2006, but after about seven years of minimal profit with renovations and relocations they have three physical locations, an online store, and an infant clothing line. The boutique came to fruition after an idea Kourtney, the only one of the sisters to graduated college, had to help give Khloé something productive to do to cope with their father’s death. Since then, they have found ways to promote their brand nationally and globally, and their international promotions have been outlined on their show. The family constantly finds ways to reach their audience while making bank, an example of this is the way Kim’s mobile app, Kim Kardashian: Hollywood, blew up. Kim made an estimated $45 million off of the game alone, as reported in her Forbes “The New Mobile Moguls” cover story. Along with the game, Kim launched “Kimojis” — Kardashian themed emoticons — for people to download onto their smartphone keyboards. In the coming month, she plans to make physical “Kimoji” merchandise for her fans to purchase.

The way the Kardashian family weaved themselves into the forefront of American popular culture is intriguing — how they have used their platforms to promote some positive change and remained relevant after all these years is impressive. With a total following across all social media that easily reaches billions, it seems as though their relevance will be upheld for quite some time. And as long as they do more good than harm, is that so wrong?

Alexis Morillo is a second-year journalism major who thinks reality television is a large-scale social experiment. You can contact them at amorillo@ithaca.edu.