The fallacies of food aid

We’ve all been through this ordeal before, ready to scrape half-eaten leftovers into the garbage only to be halted by that same dreaded scolding: “Finish your dinner, there are children starving in Africa.”

In some cases, situations of famine or war demand urgent intervention. Thus begins the practice of offering food aid — a practice the U.S. and other wealthy nations such as Canada, the United Kingdom and Japan, are particularly well-versed in, but one that has a plethora of unintended consequences.

According to the online news site The African Economist, food aid is the practice of providing developing countries with food assistance to alleviate poverty and hunger. By this definition, it is meant to relieve suffering in communities unable to provide for themselves. In some cases, this aid is necessary and has saved thousands of lives. For example, after withstanding a catastrophic earthquake in 2010, the American Red Cross provided Haitians with food aid. Countries like Ethiopia, Kenya and Pakistan have also been provided with food relief in emergency situations to help alleviate hunger in the communities affected.

In 2010, the U.S. invested more than $2 billion into food aid and assisted 65 million people, according to Oxfam — an international confederation of charitable organizations. It appears the U.S., and other countries that provide food aid, respond to poverty and hunger in a proactive and effective manner. So what’s the problem here?

For one thing, in providing such aid, countries like the U.S. and other aid providers may not be acting altruistically. Given the imperialistic history of these countries’ involvement in foreign affairs, it is not unreasonable to think that a similar motive may be behind the practice of providing food aid as well. Johnson Makoba, a sociology professor at the University of Nevada, Reno with a specialization in third world development, concluded countries that can benefit providers of food aid in some way are often prioritized over others.

“Countries are held to different standards,” he said. “If a country is strategically important … Western countries are willing to provide aid without asking a lot of questions.”

There are clear examples of this preferential treatment in U.S. food aid practices, as such aid has been distributed in territories that hold tactical interests to the U.S. — such as Afghanistan or Egypt — Makoba said. This means other countries that may have a greater need are less likely to receive food aid.

As one of the world’s most powerful democratic nations, Makoba said the U.S. may also be using food aid in order to establish democracy in other countries. Cultural Survival reports that this tactic can be employed for a number of reasons: to prevent the adoption of a non-capitalist form of government or a government with a one-party ruler, to facilitate cooperation between nations of like governments or just to act on a genuine desire to improve life and give a voice to a wider range of people. However, these efforts are usually unsuccessful.

He asserts that the purpose may be lost when local governments fail to take the means necessary to promote democracy.

“In most cases, the local elite will pretend they are going through this process to hold elections and such,” he said. “But the participation and education to involve more people is questionable.”

In addition to the less than charitable motivations behind providing food aid, there are also several underlying ramifications that can cancel out the benefit of such support.

One such issue is that the food delivered to developing nations often does not measure up to the nutritional needs of the country receiving it. A study conducted by Tufts University from 2009 to 2011 raised concerns over the quality of the food being provided to countries, concluding that more often than not, food aid recipients are given cheap provisions that are unsustainable for a long term diet.

This could be because food aid is sometimes used as a means of ridding a wealthy country of surplus food. This is known as “food dumping.” With food dumping, wealthier countries deliver extra food supplies to poorer communities. 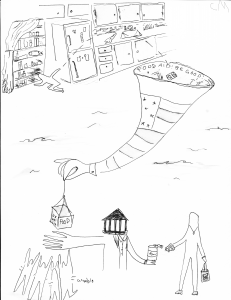 Oxfam cited food dumping as a prominent flaw in food aid because it guarantees a lack of consciousness in what provisions are provided. Countries may receive supplies or food that are not suited for their situation.

An additional problem with food aid is that it has often left receiving countries at a severe economic disadvantage. Generally, food aid is provided to undernourished countries at a price under the cost of production, Oxfam noted. Oxfam observed that this undermines local production because farmers cannot keep up and go out of business, resulting in agricultural depression and causing poverty and famine to worsen.

Many developing nations are at an economic disadvantage in their relationship with first world countries. The pressure to maintain a primary source of economic income through participation in world trade has driven many countries further into poverty. Countries are often forced to focus time and energy on harvesting specific goods to export to first world countries as opposed to selling them domestically, explained the website Global Issues. Sub-Saharan Africa, which receives the most food aid, has particularly suffered from this issue. According to the Journal of Economic Perspectives, many countries in this region supply the rest of the world with goods such as fish, coffee, fruits and other products that could potentially benefit their own hungry communities. Producing food to feed their own populations becomes subservient to the drive for profit, perpetuating the need for food aid.

William Schanbacher, whose PhD research has included the study of the ethics of the global food system, said the psychological dynamics of such a dependent relationship with providers of food aid are important. He said societies live in a constant exchange of one service for another. According to this concept, developing countries are hugely indebted to the first world countries who constantly intervene and provide food aid. “To have to rely upon another culture for your very livelihood … creates a problem with the self-identity of these third world countries,” Schanbacher said.

As if these issues weren’t enough, the distribution of food aid has also presented problems in the past. According to the magazine Foreign Policy, food aid is often delivered without proper regulation to a number of communities, including refugee camps, drought-stricken areas and the endemically poor. The lack of supervision over what happens to the food once it arrives in the targeted country means that those in need may lose out to illicit practices; the food may even be intercepted and sold illegally in markets. The Herald Tribune noted in 2011 that packages marked with U.S. and World Food Programme stamps have been found for sale in Mogadishu, far from the communities they were intended to serve in Somalia.

The Guardian reported that food aid can be intercepted by anyone, from thieving businessmen to insurgent groups. As Slate Magazine noted in 2012, the Taliban and other insurgents in Afghanistan were reportedly seizing food aid and using the resources against U.S. forces stationed in the country at the time. Yale Alumni Magazine also reported that rebel groups have been known to broadcast the starvation of local communities in order to reap the benefits of the assistance given.

Food aid from countries falling into the wrong hands means such assistance can actually end up creating conflict rather than solving it. A study by economists at Harvard and Yale found that for every 10 percent rise in the amount of food aid to developing countries, there was an increased chance of conflict in the region it was delivered to.

Additionally, some countries that receive aid also have unstable and corrupt governments that prevent the food aid from reaching the general public. In particular, Forbes reported that severe manipulation of food aid in Zimbabwe has led to an investigation of the president, Robert Mugabe, and The New York Times reported in 2010 that over half of Somalia’s food aid was stolen by corrupt contractors. Many other recipients of food aid experience similar corruption in their government, often negating the possible benefits of the assistance.

“A constant stream of (resources) is a perfect way to keep an insufficient government in power,” she said. “All the government really needs to do is court and cater to its donors to stay in power.”

Overall, whether providing food aid is actually an attempt to help starving communities or just an effort to fulfill our own democratic agenda, few benefits have been elicited from either situation. The various drawbacks of food aid demand a further exploration of alternative means of tackling poverty and hunger.

One such alternative idea is the concept known as “food sovereignty,” a movement by developing countries — independent of interference from food aid providers — to produce their own food in an effective and substantial manner. Rather than submit to international economic arrangements, food sovereignty addresses the local needs of each individual community.

According to the Czech non-governmental organization Glopolis, food sovereignty involves resisting participation in the world trade market and recognizing local agriculture as the primary means for income and food, rather than relying on other nations. To achieve this, local governments must be revised to be able to act independently from countries providing food aid. And according to Glopolis, correcting flaws within the system of imports and exports of food and not relying on intervention by other countries are essential steps toward food sovereignty.

It is clear that despite all foreign efforts made, both wealthy and impoverished nations need to address several glaring shortcomings in the practice of food aid. And if this is to happen, food aid providers will likely have to give up their current idea of what helping developing nations means.

As Slate Magazine put it in 2012, when it comes to food aid, “We need to engage in exactly this sort of painful calculus, equipped with a fuller understanding of how we’re affecting those on the receiving end of our good intentions.”

Catherine Colgan is a freshman exploratory major who thinks countries should buy local when it comes to food. They can be reached at ccolgan@ithaca.edu.