Representation and equity in the arts

A little over a year after its broadway debut, Hamilton’s tickets are still selling out at outrageous prices and this year’s Tony Awards surely took note with the Lin-Manuel Miranda hit taking home 11 out of the 16 Tony Awards it was nominated for.

Lorina Rebecca Hoppe, a musical performance student from the University of Colorado Denver and aspiring voice lessons teacher praises Hamilton for its style.

“More than half of the soundtrack is rap and hip hop and it’s a lot more of what people want to hear these days,” Hoppe said. “It’s just so wonderfully done lyrically… Hamilton definitely deserves the attention it’s getting.”

It’s outstanding soundtrack is not the sole reason that Hamilton is gaining attention. The hit musical was faced with criticism for an apparently racist casting call when it was released in backstage.com with the show demanding “non-white” performers to play the founding fathers.

“A lot of performance music has been run by white people for a while so I feel like we don’t necessarily have an issue with [representation],” Hoppe said finding little to no pre-existing situations in which a role would not be available to white people.

However, Tyree Cobbins, a Brooklyn-born actor and model who currently resides in Binghamton, NY, has had a different experience.

“As an African-American actor, I remember being a kid, there was a time where there weren’t a lot of diverse role models on television and the media in general,” Cobbins said. “I think it’s important to have that.” 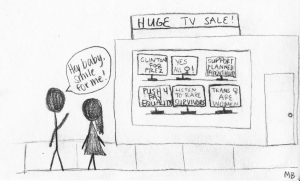 Seeing people of color on stage or does not necessarily mean that the work available evenly distributed among performers of different races. Though diversity on screen and on the stage is becoming more and more noticeable, there is still a massive gap in opportunity between white performers and performers of color.

Cobbins adds, “Honestly, I wish I could say that I was surprised and it’s really sad. As a Black man it’s going to be harder for me to find any kind of work. A white guy going for the same has so much more to choose from, but me, I don’t have so much.”

In response to these statistics, Ralph Lazo, a musician, poet and educator expresses the broader meaning of these numbers.

“The core practices and values of America in its foundation were genocide (both physical and cultural), land dispossession, labor exploitation and sexual assault,” Lazo said. “The institution of mainstream media is a powerful mechanism in the conditioning required for white supremacist-capitalist-cisgender-hetero-patriarchy to persist, and it continues to function as such.”

Nikesh Shukla is an author and creator of the Shukla test which is used to indicate the portrayal of characters of color on screen. “I realized that white people think that people of color only have ethnic experiences and not universal experiences…that really annoyed me,” she said. “I’m not just eating mangoes all the time with my aggressive mother.”

“I completely agree,” Cobbins said. “Last year at the Golden Globes, Taraji P. Henson, phenomenal actress. She won the Golden Globe for Empire and she was saying how it’s crazy how for her to win a Golden Globe, it took for her to play an ex convict who escaped from prison. I love that he said and it’s so true. Cut the stereotypes. Stereotypes are stupid. You’re gonna be exposing the young people of color in this generation.”

Cobbins also discussed the fact that the lack of representation limits the possibilities for people of color.

“It’s very important because if you’re a person of color and you don’t see yourself being represented, it makes you feel like, okay, maybe I can never do that. Maybe someone who’s Black or Asian or Latino or Native American can’t be a superhero…For a child, imagine how that unlocks your mind and the possibilities.”

“To have that representation for young people who look like them will give them the motivation to do what might be deemed impossible for their race and go out into the world and do good things.” Cobbins said.

Lazo also argues that representation might not mean equity on its own.

“It’s part of a social solution that leads to equity,” he said. “I think what is probably more important that us seeing a broader range of representation is the development of a collective critical consciousness that allows us to deconstruct the messages we receive through representation.”

Berellyn Alberca is a freshman chemistry major who knows for a fact that the entertainment industry, despite their best efforts, can do better. They can be reached at balberca@ithaca.edu.