The Sport of Stadium Building

How new venues cost cities and taxpayers in the long run

In 2013, Pacific Standard Magazine reported that “over the past 20 years, 101 new sports facilities have opened in the United States — a 90 percent replacement rate — and almost all of them have received direct public funding.” What we’ve seen in recent history is that taxpayers have been fed the myth that in addition to the pride a team brings its hometown, a new stadium will also bring with it new jobs and economic growth. However, this is often not the case. 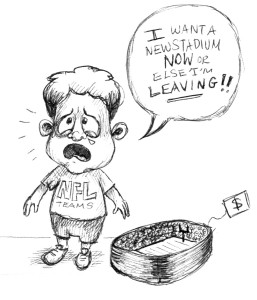 Roger Noll, an economist at Stanford University, said the economic effects of building a new stadium for a National Football League team have been determined.

“One settled issue in economics is that a professional football team produces no measurable benefit to the local economy,” Noll said.

In a Los Angeles Times op-ed, Noll explained that stadiums employ fewer than 100 full time employees, along with hundreds of seasonal employees who work fewer than 100 hours. Additionally, Noll explained that there is little evidence to suggest that any “spill over foot traffic” exists in areas with major stadiums. When a fan is going from a busy parking lot to view a game, they are not likely to stop and window shop or grab a bite to eat in that 500 foot distance. A new stadium is more likely to actually take away business from the area, as going to a game serves as a replacement for spending on other items, Noll said. When a consumer spends their $50 on a nosebleed seat to see a football game, they are not spending that money on a nice dinner at a local restaurant.

Essentially, my spending at and going to a Patriots game creates a massive profit. But only a small amount of money goes toward repaying the $72 million that taxpayers paid in 2007 for the building project that was Patriot Place, which cost a total of $350 million.

As Jeffrey Dorfman explains in his 2015 Forbes article: “Some of that tax revenue has to go toward government costs associated with the holding of sports events: extra police, traffic control, perhaps more public transit, etc. At the end of the day, only a very small fraction of total spending associated with stadium events is left over to help pay back the taxpayers for building a stadium.”

This can result in residents of a city being saddled with incredibly expensive sums of money. According to a 2013 article published in The Atlantic, the Washington Redskins got $4 million from the taxpayers to update a workout facility while the Cincinnati Bengals, as well as the city’s Major League Baseball team the Reds, received $33 million of Ohio taxpayers’ money to renovate their own stadium. Additionally, after vague threats to relocate, the Minnesota Vikings got $506 million from the taxpayers to pay for a new stadium.

A 2015 Huffpost Sports article explains that the price of stadiums that teams advertise does not include “subtle costs that fall to taxpayers, like property and sales tax exemptions, the loss of stadium-related revenue to teams, and other forms of indirect support.” As a result, taxpayers end up paying more than they think.

Victor Matheson, an economics professor at College of the Holy Cross, said stadiums can be subsidized in a multitude of ways.

“The most obvious way is simply to have the taxpayer build the stadium, but then let the team use the stadium rent-free and let the team keep all of the money from events held at the stadium and for naming rights,” Matheson said. “Over the past 25 years, the taxpayer has paid for roughly 65 percent of the costs of new NFL stadiums.”

Sports teams — and games — have long been an integral part of American tradition and society. If recent history is anything to go by, because teams know that cities are usually willing to build bigger and better stadiums, they aren’t afraid to ask for them. But is the public willing to give into those same pressures? Bruce K. Johnson, professor of economics at Centre College, conducted studies in the early 2000s in various cities and found overwhelmingly that citizens were willing to pay far less than the typical subsidy for stadiums built in their cities. On average, taxpayers were only willing to pay one fifth of the average subsidy asked of them to build their team a new stadium.

However, moving to another city, or threatening to move to another city, has proven to be a useful strategy for sports teams in getting their way, even when the taxpayers are reluctant. One example of this was when the Buffalo Bills threatened to move to Seattle in 1971 after the late owner, Ralph Wilson Jr., demanded a new stadium. Twenty two million dollars in public funding — $118 million in today’s dollars — got him just that. And in return, according to a 2014 report in The Guardian, the city saw “basically zero to negative economic impact to the area.”

Matheson said teams threatening to leave cities if they don’t get what they want is quite common in the NFL.

“In Minneapolis, taxpayers coughed up about $500 million after the owner threatened to move the team to LA.,” he said. “Currently, the St. Louis Rams, Oakland Raiders and San Diego Chargers are all under threat of relocation, and the Rams are actually moving next year. In each case, the current owners used the threat to try to leverage a new stadium out of local governments.”

Stadiums aren’t the only sports related thing that cities sometimes come to regret. Economic downfalls similar to those of building a new sports stadium for a professional team often accompany those cities that host the Olympic Games. Matheson said although at first it may seem that hosting an event as massive as the Olympics would bring increased commerce, there is “very little evidence to suggest hosting the Olympics provides much of an economic benefit.”

In a New York Times blog piece economists Andrew Zimbalist and Robert K. Barney write that, as with the construction of sports stadiums, proponents of the Olympics claim the games increase economic growth in an area by upping consumer spending and tourism. But just as with NFL games, fans come to see the event and leave. They tend not to stick around and spend in and around stadiums. The Olympics are more of a tool for boosting patriotism and advertising a country’s strength, just as Beijing did in 2008.

Additionally, Barney writes that the long term impacts of hosting something like the Olympics can be quite negative.

“Civic pride aroused from such an endeavor is fleeting and the monuments built for the spectacle in the form of stadiums and sporting venues shortly become little more than ghostly reminders of once glorious days,” he wrote.

Examples of these long term costs are easy to see. Montreal’s 1976 Olympics began with a hope for long-term tourism and ended with $1.5 billion in debt. Canada overbuilt in terms of hotels and other accommodations, buying into the thought that the games would pay for the facilities and more. Barcelona, Sydney and Atlanta all broke even in terms of short term costs, but ultimately incurred long term public debt. Andrew Zimbalist writes in the New York Times “an econometric study using monthly data found that there was insignificant change in retail sales, hotel occupancy and airport traffic during the games.”

Many cities have found hosting these games and accommodating their professional sports team to be a losing proposition. With the average lifespan of a new stadium having dropped to just around 30 years, according to a 2015 Al Jazeera article, and the median age of stadiums at 31 years with 10 new stadiums having been built in the past 12 years, according to CNN Money, by the time the bonds are paid off for that new stadium, the sports team using it may be in need of a newer one.

Sports franchises have created a vicious cycle. Threaten to leave, get more funding to build a new stadium and repeat when it becomes outdated. So don’t buy into false campaigns of job creation or economic growth. And cheer on your favorite team from the comfort of your couch.

Anna Lamb is a freshman journalism major who has turned down several offers to be the lead architect in charge of building a new sports stadium. You can email her at alamb@ithaca.edu.