The Idolatry of Sports

When rooting for a team becomes a religion

I have been known to say, in a joking manner, that the number one religion in the state of Texas is football, specifically high school football. This joke, and slightly genuine belief, probably originated from the book and film Friday Night Lights, which tells the tale of a high school football team in a small city in West Texas called Odessa and how this team is the most important thing to everyone in this town. In Odessa, some people have a connection with God, but everyone has a connection with the Permian High Panthers.

While this might be true about Texas, it is also a microcosm of a greater phenomenon that is thoroughly present throughout the rest of the United States and the world. Where there are sports, there are fans and where there are fans, there are those who take their fandom to a level that could be considered religious and makes some of us uncomfortable. Face-paint, costumes, signs, chants, season-ticket plans and enough merchandise and memorabilia to fill up an entire room in someone’s house are some of the characteristics that are associated with superfans — the people we have all seen at sporting events that are so devoted to their team they make us wonder, “Is there anything else going on in their lives?”

A 2015 Gallup poll found that 59 percent of Americans identify as sports fans in some capacity. Stephen Mosher, a professor in the Department of Sport Management and Media at Ithaca College, said the reasons people attach themselves to sports are the same as why someone would take an interest in any form of culture.

“It’s not any different from good music or good film or good television,” Mosher said. “People who enjoy sport, and think they know it, like watching other people do it at the best of human capacity.” 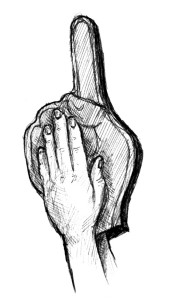 Robert Montenegro, a writer for Crooked Scoreboard — a site that aims to approach sports writing by providing different angles on sports stories than other media outlets — said part of the appeal of sports is that it contains some of the same storylines that appear in other forms of media. Montenegro said one example of this is the inherent attraction of humans toward having allegiances — which in the case of sports fans manifests itself in attaching themselves to teams — and creating a narrative of a battle between good and evil, a storyline that is often present in sports as well as in other forms of entertainment.

While 59 percent of Americans may enjoy watching sports played at its highest level, the faction within this 59 percent whose lives are fueled by a passion for their favorite team are an enigma. As an avid sports fan myself, and one who is incredibly passionate about sports and his favorite teams, it is difficult to understand that next level where fandom bears a stronger resemblance to religious devotion than a hobby.

This type of fandom is stronger than an obsession. I have been known to show obsessive qualities when following my favorite teams, but I would never cover myself in paint, make signs or wear a costume to a game. However, Michael Serazio, a professor in the Department of Communications at Boston College who has researched the psychological impact of a team on a city, said this type of expression is a way for people to unite as fans and is a necessary part of this level of devotion.

“Visible symbols that identify people as members of a tribe have always been necessary throughout human history,” Serazio said. “Some of the more outlandish versions of that speak to a human need to sometimes defy what is considered normal in the day-to-day.”

An additional impact this type of fandom can have was demonstrated when National Basketball Association superstar LeBron James left the Cleveland Cavaliers for the Miami Heat in the summer of 2010 and became public enemy number one in the state of Ohio. He was verbally attacked by throngs of fans — there were public burnings of his jerseys and fans wore shirts that said “Quitness,” parodying his Nike slogan of “Witness” to name just a few ways people reacted. It’s difficult to imagine a situation where one would feel compelled to do any of this, no matter how angry they were at any athlete, but Mosher said this is simply another way of showing passion.

“People cry at movies, people cry when they listen to songs,” he said. “If you invest your emotions in an activity, particularly a good activity, and there’s a lot of passion involved, you are going to feel the highs of highs and the lows of lows.”

Serazio said this type of devotion toward a sports team stems from people’s basic need to relate to each other.

“There’s something fundamental about the human need for community,” he said. “And for millennia, one of the things religion has provided was community. This is a huge reason for the appeal of sports because as human beings we need reasons to connect with each other and sports provides a visible manifestation of something that we can collectively believe in. Someone who is not religiously inclined could find in sports a suitable alternative for those same existential needs.”

Montenegro agreed, saying a positive aspect of sports fandom is that sport can be what people find solidarity in to keep their lives stable.

Montenegro said becoming enthralled with a sports team takes time, but once a person becomes attached, the team can start to become a part of who someone is.

“After a certain point of showing allegiance to a team, people will start to build their identity around that team and that’s when it becomes personal,” Montenegro said. “When someone insults the Yankees, and you’ve made the Yankees a part of your identity, they are now insulting you and people will take that personally.”

A particularly tragic example of when sports fandom has gone wrong was when a Los Angeles Dodgers fan savagely assaulted a San Francisco Giants fan outside of Dodgers Stadium in 2011.

“Being a seriously devoted sports fan isn’t necessarily bad, but when fandom leads someone to get in the way of other social issues or instigate violence on another person, that is when fandom can take things too far,” Montenegro said.

However, for the most part, sports fandom is a relatively harmless way to occupy one’s time, unless someone makes decisions because of their sports fandom that they would normally not make.

And while some might make the argument there are much bigger issues impacting society that should be receiving more focus, and while there are circumstances when this is valid, sports are important for how they impact us culturally and socially. Sporting events are some of the biggest displays of culture in the world — the Olympics, the World Cup and the Super Bowl are all grand events that involve sport at the highest stage. Sports can also be used to bring people together in a variety of ways, whether through playing or spectating.

“Sports provide such an important cultural glue that binds people together,” Serazio said. “… What sports provides in terms of a communal identity is the same as how any other social vehicle creates unity within a group of people. Sports are the vehicle that many of us use to temporarily forget about those other more serious problems.”

Although it may be hard to completely understand how or why people devote themselves to their favorite teams in a pseudo-religious fashion, it’s difficult not to respect the way they are able to connect with something on such a deep level. Some people need their family, others need their faith and others — like sports fanatics — just need their team. And in a hilariously ironic turn of events, there are some people who need both their faith and their team, such as a convent of nuns in San Antonio who are incredibly devoted to both God and their hometown San Antonio Spurs. Google it.

M.N. Hornick is a sophomore journalism major who once lost a bare-knuckle boxing match to Bernie Sanders. You can email him at mhornick@ithaca.edu.