RAW FROM THE SAW: Creative Control 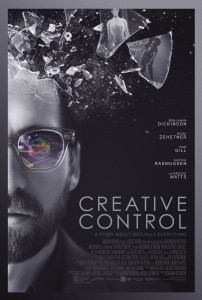 Spike Jonze is a genius, because only a genius could pull off a funny, heartfelt romance about a guy who falls in love with his operating system. There are a million moments in Her at in which the movie could have fallen apart completely, namely the sex scene. Certainly, a less-experienced director would have made all of these mistakes, and the movie would have failed. That inexperienced director is Benjamin Dickinson, and the movie that fails is Creative Control.

Dickinson is also the film’s writer and star, a lonely ad developer named David. The film is set in the near-future of New York, where people still smoke cigarettes, use loud construction machines and take yoga classes. It’s a future very similar to our present.

David is working on ads for an augmented reality system called Augmenta, a program that allows the user to do anything — which is to say that the film never occupies itself with telling us what exactly Augmenta does. When somebody puts on the Augmenta glasses, they can look through photo collections, make a video call and sometimes just use the glasses’ interface like a laptop screen.

David, however, uses the glasses to fantasize about Sophie (Alexia Rasmussen), the girlfriend of his best friend Wim (Dan Gill). David’s weird sexual fascination with Sophie is complicated further by his marriage to Juliette (Nora Zehetner), a yoga instructor. Is it still cheating if the other woman is a hologram?

If you thought that sex with a hologram sounds creepy and awkward, you’d be right. Where Her struck a perfectly light and whimsical tone, the romantic situations of Creative Control never become anything that isn’t profoundly creepy and sad. Not to mention the performances; Dickinson’s character is thoroughly unlikeable and every decision he makes against Juliette is one that sinks him deeper into the audience’s contempt.

Oh, and then there’s Reggie Watts! In the world’s most baffling, superfluous subplot, David’s ad company decides to consult Watts to be the spokesperson for Augmenta, as if Reggie Watts is a household name and possesses the same star power as Alec Baldwin or Jeff Goldblum.

Watts’ very existence in this movie is a puzzle to be solved, and his function as a character is completely lost on me. His performance is so strange, so out of left field, that it completely clashes with the rest of the film. It feels like Watts was acting in a different movie entirely. He spends every one of his scenes pawing around the set like a big, innocent cat, putting out creepy vibes and never leaving his mellow, introspective monotone regardless of subject matter.

It’s even more upsetting because Watts was so heavily promoted in ads for this movie, yet even David and his coworkers treat Watts as a joke. They don’t take him seriously, and Watts isn’t even given that much to do.

Much of Creative Control feels like it’s tearing itself apart at the seams. The script is that of a comedy, but every other element of the film insists that it’s a drama. And, when characters try and tell jokes or Watts does something wacky, I was unsure of whether I should be laughing or analyzing it to see what it had to say about the human condition. Though, in retrospect, I think Creative Control probably has as much to say about the human condition as a can of tuna fish (and tuna can’t comprehend human philosophy).

Apart from the comedic banter and whatever Watts was doing, Creative Control has a surplus of darker, deeper areas that it tries to explore including drugs, withdrawal, betrayal, sex and a collapsing marriage. It overreaches and consequently winds up not paying enough attention to any of its themes.

Still, the film’s portrayals of intimacy are something to be admired. Dickinson has a good sense of the dialogue in these close romantic exchanges. A scene in which two characters’ conversation evolves into a kiss feels natural, realistic. Sex scenes feel true to life — now, I’ve never made love to a bearded hippie yoga instructor before, but the way that scene plays out is delightfully void of all the schmaltz and sexiness typical not just of big Hollywood films, but also of most indies.

But Creative Control’s unlikeable main character, convoluted plot, creepy relationship and cynical future are all enough to make one long for the odd, colorful fashion and simple love story of Her. At least Her has 100% less Reggie Watts.