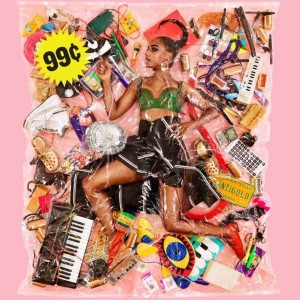 On her third studio album 99¢, Santigold’s peppy, “genreless” style prevails yet again with light electric pop tunes that simultaneously animate the body to dance and herald in the warm, liberating days of summer. The album opens with “Can’t Get Enough of Myself,” letting Santigold demonstrate her beautiful mezzo-soprano in a catchy introduction. The keyboard adds a bizarre, bouncing energy to the song and carries Santigold’s voice like a beach ball being lifted by ocean waves.

The album’s summer beach groove remains consistent throughout, with occasional dips into an island mix of dance and pop on tracks like “Big Boss Big Time Business” that, despite their interesting sound, get bogged down in annoyingly repetitive lyrics and odd vocal choices.

“Who Be Lovin Me,” a track featuring hip-hop artist iLoveMakonnen, is completely ruined by his supremely irritating, sleazy and half-baked vocals. The man’s voice sounds like an out-of-tune violin that just wants to die. The lyrics don’t help either, especially not when they’re as unfortunate as, “I had to swerve on little mama cause she out here with that llama/Alpaca on my arm, I’m stayin’ warm in any storm/A super chef with the snow captain/Out here, move it, make it happen.”

Apart from those two missteps, Santigold includes some thrilling tracks, particularly in her Rihanna-esque “Banshee,” a song injected with a wavy, exciting synthetic orchestration. This is “SOS”-era Rihanna: aggressive and pounding, yet relentlessly high-energy.

“Walking in a Circle” — not to be confused with Buzzsaw Magazine favorite “Throw That Ass in a Circle” — is hippier and hoppier than the rest, with an intimidating beat, as slick as it is hypnotic, and an emphasis on the robotically droning vocals.

The best pieces on the album are “Rendezvous Girl” and the ending track, “Who I Thought You Were.” “Rendezvous Girl” is “Call Me”-era Blondie with a swaggering (albeit nearly incomprehensible) ’80s hook and infectious dance beats, while “Who I Thought You Were” is a enlivening, energized indie number that further shows off Santigold’s vocal diversity and ability to craft songs to imitate the 80s.

In an album filled with summery pop, Santigold’s talent as a singer/songwriter shines through, particularly in the exciting dance tracks. Those dance songs, whether mock-Rihanna or mock-Blondie, are the most memorable takeaways from 99¢. And, man, am I ever ready for summer to come.