Home IssuesPuzzles Is It Too Late to Play ‘Sorry’?
PuzzlesSawdustweb-featured

Is It Too Late to Play ‘Sorry’?

In a dramatic new interview, Justin Bieber has revealed that his big hit “Sorry” is actually about a game night gone horribly wrong. “Sorry” was originally believed to be about Bieber’s breakup with Selena Gomez.

“In a way, that’s true,” Bieber said, choking back tears. “Selena was at that game night. But she’s only one of the people I want to apologize to.”

A few months ago, Bieber challenged his friends to a game of Sorry and that was when he allegedly crushed them. “Justin was taking our spots and putting pieces back to home without even saying sorry. It was disgusting, really,” Usher said. The singer was among the three other players during that fateful night.

“That was the night Justin and I were over for good,” Gomez shared. “I mean, who plays Sorry without apologizing when they send someone back to start?!” After making her statement, Gomez became visibly upset, and couldn’t continue the interview.

“I hurt a lot of people that night, and I need to change my game strategy. ‘Sorry’ goes out to them,” Bieber said. “I hope it’s not too late to say sorry.” 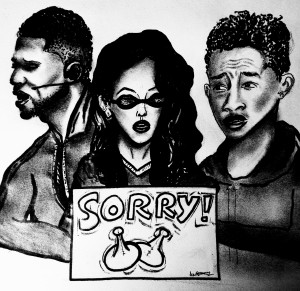 Jaden Smith was the final participant of the game night. Though he declined a full interview, Smith shared one thought.

“Your mind has a duality to it. So when one thought goes into your mind, it’s not just one thought, it has to bounce off both hemispheres of the brain. When you’re thinking about something happy, you’re thinking about something sad. When you think about an apple, you also think about the opposite of an apple. It’s a tool for understanding mathematics and things with two separate realities,” Smith said.

Bieber went on to say that he was shocked people didn’t realize what the song was really about. “I thought it was pretty obvious,” he said, referencing lines like, “I hope I don’t run out of time, could someone call the referee?” and “But you know that there is no innocent one in this game for two.” With words such as “referee,” “game” and “piece,” Bieber thought it was clear this song was about a board game, and not something as trivial and everyday as love.

“I’m a true artist, you know? I write about deep, unexpected stuff, so in a way, fans should have seen this coming.”

Bieber admitted that he does hope this song will help him get back with Gomez, noticeably in the line “’Cause I’m missing more than just your body.”

Bieber hopes he, Usher, Smith and Gomez could all get together again one day and play Sorry. This time, Bieber swore, it would be different.

“I’ll take every single piece of the blame if you want me to,” Bieber said. “So let me, oh let me redeem, oh redeem, oh myself tonight.”

Rachel Mucha is a junior journalism major who knows that Jaden Smith is nothing less than a modern prophet. You can email her at rmucha1@ithaca.edu.