Zika as a threat to 2016 female Olympic athletes and tourists

According to the New York Times, an estimated 500,000 people will be traveling to Rio De Janeiro, Brazil for the 2016 Summer Olympic Games this summer. This year, researchers are looking into how much of an effect, if any, the Zika virus will have impact travelers and if this could lead to Zika spreading within the United States.

As of March 23, 2016, according to the CDC, 273 cases of Zika have been reported in the United States. Of those, none were locally originated, but six were sexually transmitted. The biggest previous Zika virus was detected in a 2013 outbreak in Polynesia. It has been determined that as the Zika virus has spread there have been many as 1.5 million people that have contracted the virus since, and investigators are linking this virus to the possible cause of several birth defects found in newborns, including microcephaly — a defect where the infant is born with an abnormally smaller brain and head, inhibiting brain development. This disease has little to no effect on the person who has contracted it. Many have reported mild flu-like symptoms if anything. The infection however, which can be sexually transmitted, results in the passing on of this birth defect to the fetus. Brazil’s warm climate, efficient vectors and geographics create a perfect breeding ground for Zika.

“According to the latest data from the Ministry of Health, Brazil recorded 462 cases of microcephaly between October [2015] and February [2016], compared with an annual average of 150 cases,” according to Jamaica Observer. 41 of the cases have a confirmed link to the Zika virus.
Fear of Zika spreading at an international event was seen previously at the 2014 World Cup,where the virus posed a threat when hundreds of thousands of visitors flowed into Brazil. According to Herald Scotland, it has been determined that the virus was brought to the World Cup by French Polynesian visitors who had just experienced their own Zika outbreak. 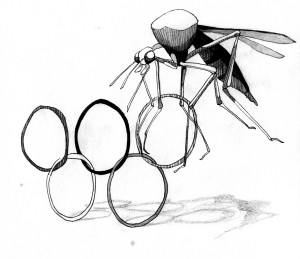 Many hyped Americans and travelers from all around the world are now questioning their safety, as they have planned to travel to the summer Olympics this year. Researchers believe the likelihood of an outbreak in the U.S. is quite low. However, there is a possibility of Zika being transmitted through mosquito bites and through sexual contact; if one partner has been infected, it is likely their partner will become infected as well. The stakes are even higher for athletes. According to USA Today, all this hub-bub about the virus has many athletes concerned.

Though the athletes headed to the Olympics have trained for the games their entire lives, for some, it just isn’t worth it. This includes U.S. Women’s soccer goalie, Hope Solo. Solo told Sports Illustrated that if she had to “make the choice today, [she] wouldn’t go.” Solo plans to start a family in the future with her husband, Jerramy Stevens, former tight end for the Seattle Seahawks. Solo, like many other female athletes, has a serious decision to make about the games. These women are essentially being forced to choose the games over a healthy, defect-free newborn baby, should these women so choose to have a family later in life. This is not an easy choice.

As of March 2016, the Brazilian government claims the Zika virus has taken three lives, and there is currently no vaccine or cure for this disease; however, there are many precautions to try and prevent the Zika virus.

According to ABC, Brazil’s President Rousseff continues to send troops knocking door to door to inform everyone of the disease and plans necessary during the Olympics. As important as personal health is, with the Olympics less than six months away, it is very unlikely at this point that the Olympics will be canceled. The Brazilian government is taking action to make sure the people of Brazil and all other travelers are informed. With the conscious effort of the international community, hopefully this summer’s Olympics can be a safe one for all attendees.

Madeline Mathers is a first-year television-radio major who isn’t planning to take a trip to Brazil any time soon. You can email her at mmathers@ithaca.edu.