2016 election to be decided by card game

In a shocking turn of events, an insider source has discovered something incredible about this year’s presidential race — it is not to be decided not by voters, but instead by a rousing game of Cards Against Humanity. 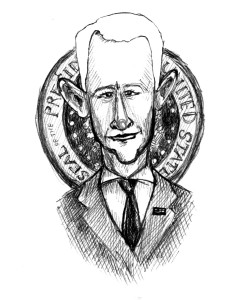 The race has already been getting hot and heavy, but our source tells us that everything American citizens have viewed on television, the internet, and the news has been nothing but a ruse to cover up the true nature of this election.

The source was able to get access inside one of the games. Here is their direct account.

Scene: a dimly lit room, likely the basement of a dive bar. Light streams in from a window, illuminating the dust and smoke that fills the air. The room seems quite empty except for a round table in the back corner. Seated at the table are Mr. Trump, Secretary Clinton, Senator Sanders and Governor Kasich.

Suddenly, a creaking noise. A slim figure stands in the open doorway, hat shadowing his eyes and a cigarette burning away in between his fingers. As he emerges from the shadows, his identity is revealed: Anderson Cooper. Dear god, is he handsome.

He approaches the table, and tensions are high as the candidates look hopefully — but not directly — into those mysterious, piercing blue eyes. Cooper wordlessly produces a pack of black and white cards from his coat pocket. He places them firmly on the table, and a shiver runs down all of our spines as Cooper asserts his physical, intellectual and sexual dominance over the entire room.

The cards are dealt, the rules are explained, and the candidates begin.

First round, Trump puts down a distasteful joke about the Oedipus complex in regard to his daughter. The other candidates groan in disgust. Cooper shakes his head disappointedly and banishes Trump to the losers’ quarters, where he finds Sad Turtle Man Jeb Bush.

Of course, Jeb is delighted to have a friend and meets Trump with open arms, assuring him, “Slow and steady wins the race!”

Little does he know, the race is over for them both.

Back in the room, it’s round two.

Sanders leads with a tasteful yet amusing joke about Keanu Reeve’s shiny thighs. Cooper chuckles lightly to himself, then turns to Clinton as she reveals her own cards. Somehow, an exact copy of Sanders’ Keanu Reeves joke is written on her cards as well. She claims the joke to be her own, but Sanders begins wagging his finger at her ferociously, voicing his dissent at her trickery. This creates a large argument, and Cooper sighs and drags the two of them, bickering, out of the room.

A grin begins to spread across Kasich’s face. It’s all over. He’s won.

But just as the first tear of victory begins to run down his cheek, a cloaked figure emerges from the shadows and silently looms over him from behind. The figure beneath the hood shows his face — it’s none other than Ted Cruz, Zodiac Killer. He swiftly pulls a knife from beneath his robes and does his work, fleeing before Cooper strides back into the room.

A wave of relief washes over Cooper’s face upon spotting the mortally wounded Kasich.

“One less contestant to eliminate,” Cooper mutters to himself in his beautiful, sultry voice.

There is now only one true victor — Anderson Cooper, the next and undoubtedly most handsome President of the United States of America.

Laura Miller is a freshman history major who thinks #BirdieSanders is the best fit for this country. You can email her at lmiller@ithaca.edu.