But Where Are You Really From?

White man goes on search to find his true identity

John Smith had finally had enough. After almost 30 years of not knowing what background to identify with, John is went on a journey to pick a nationality.

“I like so many parts about my ancestry. I’m Italian, which makes sense because I eat at Olive Garden a few times a week. I can’t get enough of those breadsticks!”

John is also part French. This isn’t a surprise, since his friends claim he can often be found brooding near an open window, smoking a cigarette.

In addition, John is partially English, Spanish and Polish. But his clearly diverse heritage made John feel like he was being pulled in five different cultural directions.

He was jealous of his friends who are 100 percent something, or even 50 percent. “My one friend is half Italian and half German. I envy her. On Christmas Eve they have the seven fish dinner, and then on Christmas Day they have bratwurst for dinner. I just don’t have the freedom to do that.” 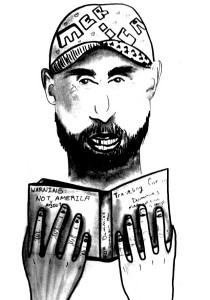 John decided to put his foot down and simply choose one of his nationalities to identify with. In order to do so, planned to travel to each country his ancestors were from and decide which he liked best.

The first stop on John’s trip was Italy. After the long plane ride, naturally, John was starving — so he searched for an Olive Garden. To his horror, he could not find one. He settled for a random restaurant, but was appalled when there were no garlic breadsticks. John left in a huff, deciding Italy was not for him.

Next stop, France. When he arrived, John encountered a large group of smokers near the Eiffel Tower. “I thought it would be the perfect opportunity to interact with my people,” John explained. He joined the group and put on his best brooding face, but the French people looked very confused. One of the smokers asked why he looked so sad. “She told me I should be happy, because it was such a beautiful day! Can you believe that? I don’t want to be French if I can’t brood and question my existence!”

England was next. John was particularly optimistic about this country, since he is such a big Downton Abbey fan. And who doesn’t love Prince George?! Still starving at this point, John figured he’d try his luck at a pub. He ordered fish and chips, but was horrified when he was given fish and french fries.

“It was like the nightmare was never going to end,” John said sadly.

Not wanting to give up yet, he saw biscuits on the menu and ordered that. When John was brought cookies, he angrily flipped the table over and stormed out. Discouraged, John knew in his heart where he had to go next.

John returned to his one true home: America. He realized that country had been there for him while all the others merely let him down.

“America is where I am meant to be and American is my only nationality,” John boldly declared.

He realized that in America, there are quality restaurants like Olive Garden. In America, you’re allowed to be miserable without anyone asking why. In America, when you ask for chips, you get chips.

“I realize this idea is quite revolutionary, which only makes me more American because we always have the greatest, most original ideas. I am leading the charge. When every other country has things that you hate, come to America where we can complain about it together!”

Rachel Mucha is a junior journalism major who only considers one restaurant to be fancy — Denny’s. You can email her at rmucha1@ithaca.edu.