Tracing the Evolution of Socialism

The past and present of a rising political ideology

The first formal definition of socialism was coined in London in 1848. The political theory of socialism was first written in the “Communist Manifesto” at the beginning of the Industrial Revolution by Karl Marx and Friedrich Engels. In this first interpretation, socialism was a stage in a political cycle, according to Allen Mills, professor of political science at the University of Winnipeg.

“Marx understood socialism as a very specific time when then capitalism fell, and the workers had taken over,” Mills said. “And with socialism they would prepare the ground for the coming eventually of communism.”

To truly understand this form of socialism, capitalism and communism must also be explained in relation to it. According an article published by The Independent in 2015, capitalism came about in the 17th century and is focused on the right to own private property. Socialism is the response which comes about from inequalities that arise from capitalism; the complete collapse of a state or regulation of goods and services. Following socialism comes communism, which was actually vaguely explained The Communist Manifesto, but later to be interpreted by most as the elimination of private property.

In other words, in the Marxist definition of socialism, it is the inbetween of capitalism and communism containing aspects of both. According to the text “A Dictionary of Marxist Principles” by Tom Bottomore, socialism was never explicitly defined by Marx and Engels.

In becoming a communist society, the state completely evolves, whereas in socialism, the state works with the capitalist system.
The ideas from the Communist Manifesto, were the groundwork for the socialist movement in the U.S, but slightly evolved. Instead of socialism being just transitory stage, it is a permanent political system. 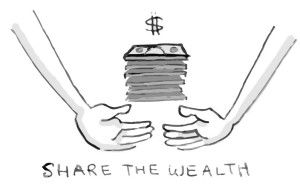 The first socialist party in the US formed in 1901, according to Peter Dreier, professor of politics and urban and environmental policy at Occidental College.

He describes support derived from three main groups. The first of these groups was influenced by a Protestant movement called the Social Gospel.

“Lots of people came to socialism through religion.” This group believed that “the true Christian was somebody who shared the wealth and believed in addressing poverty,” Dreier said.

The second group came from a portion what Dreier describes as the “working class people and labor battles and the struggle over the eight hour day and the 40 hour week, and exploitation at work.” Socialism would prove to be useful to this constituency for under this political system the worker would have a more equitable stance.

The final group came from the Populist movement. “A lot of farmers came to socialism by realizing that the banks and the railroads were ripping them off,” Dreier said. “They developed an organization called the Farmers Alliance and began to demand that the government take control of the railroads and the government regulate the outbacks and the storage grains.”

The members of the social gospel movement, the labor unions and the populist farmers alliance came together to form the socialist party in the United States. They combined their principles to form an Americanized, less radical socialism, that generally did not believe in overthrowing the capitalist system, but rather an amplification of true democracy in government, according to Dreier.

“Generally socialism in American history was some kind of belief of injecting democracy into the economy,” said Drier. “As well as into the political system.”

This party found success at first. In 1912 the party received 6 percent of the nation’s vote in the presidential election with Eugene Debs as their leader. Additionally, Dreier said, at this time there were around 1,000 elected socialist representatives across the U.S. in government positions like mayors, legislators and congressmen.

However, this high point for socialism in the United States did not last very long.

“The Russian Revolution in 1917 scared Americans,” Dreier said. “They thought they might try to bring communism to the United States, and there was a lot of repression against socialists and communists.”

There was a great fear among Americans of communism coming to the United States, in the hands of communists and socialists, commonly known as the Red Scare. With this paranoia came the Espionage Act of 1917 under Woodrow Wilson which, among many other aspects, tried anyone who publicly vocalized dissent against actions of the United States, which at the time was entering World War I.

One of the many charged under the espionage act was leader of the socialist party at the height of its success. Eugene Debs was tried under the act and sentenced to 10 years in prison for publicly opposing U.S. involvement in World War I, according to “U.S. Congress Passes Espionage Act.” Debs spoke of his socialist beliefs at his trial.

Another period of struggle for socialists was during the 1950s and continued throughout the Cold War Era. Grounded once again in impeding communism from Russia, this time the enemy was under a different name, The Soviet Union.

The Soviet Union and the U.S. had a tense relationship following World War II due to American concern of impeding communism, Russia’s anger of America’s late entry in World War II and Russia’s frustration that the United States refusing to recognize the USSR as a world power.

The United States had a policy of containment when it came to the Soviet Union, trying to stop its the expansion of communism in developing nations. Both sides participated in wars in the Philippines, Korea, Vietnam and Cuba in an attempt to spread their political ideology, causing great turmoil.

The U.S. was fighting a war against communism abroad, making it no better for communists, and socialists back at home due to the Mccarthyism and containment, Dreier said.

McCarthyism was named after Joseph A. McCarthy, a Republican senator from Wisconsin in the 1950s. McCarthy was extremely anti-communist and was known to accuse anyone with political ideas that slightly disagreed with his of being a communist. McCarthy aggressively sought out to rid the U.S. government of all communists, putting over 2,000 government employees out of their jobs following World War II.

Unfortunately, McCarthy was not the only one participating in these wrongful, unfair punishments. In 1947, President Harry Truman passed loyalty order which required all government employees to be analyzed to determine their loyalty to the U.S., highlighting the persecution of all by anti-communists.

However for socialists, major times of struggle involved people often confusing their ideology with communism.

“People were afraid to say that they were socialists,” Drier said. “Because people thought they would be communists.”

While the ideologies of socialism and communism contain some similarities, they are different. In socialism the government operates the system, but there is still a chance for citizens to gain private property and wealth. In communism there is no private property. This is something that most failed to see in the past, and many still fail to see today.

Despite this historical stigma against socialism, many socialist beliefs that were written in the party platform of 1912 have come true today, according to Dreier. The women’s right to vote, minimum wage, social security and a progressive income tax were all pillars of the party’s platform and all exist today without question.

“The radical ideas of one generation are often the common sense ideas of the next generation,” Drier said.

Negative connotations towards socialism also derive from some of its principles that largely threaten the wealthy, like economic equality. Wells said socialists faced issues from the fact that their political beliefs threatened these certain groups of people.

Socialism identity today in the U.S. can readily identified in the Socialist USA Party. The 2016 Presidential candidate for this party, Mimi Soltysik, provides a much evolved definition of socialism.

“I see socialism primarily as worker control over the means of production.” Soltysik also mentions “democratic process at the community level.”

The party’s platform calls for no overthrow of the capitalist system, but simply reforming it and the “abolition of every form of domination and exploitation.”

Despite all the fear generated from socialist principles and events in the past there are currently indications of more comfort toward the economic principle.

According to a poll done by CBS and The New York Times titled “Socialism” in November 2015 found on Polling the Nations, 32 percent of Americans view socialism positively, including 56% of the democrats polled. In the past with the great dissent that socialists faced, they would likely have not seen this amount of support.

Soltysik has noticed a shift towards more positivity for socialism where he lives in Southern California.

“At least here if I say that I’m a socialist the response is generally positive.” Soltysik said. “I think for a long time the expectation would be that we’d be receiving hostility. Over the last few years I haven’t had that experience.”

Additionally, Soltysik also attributes the shift on the creation and popularity of social media.

“With the advent of social media people have the ability to sort of fact check in real time,” Soltysik says. “So that when these propaganda campaigns awaits, people can do their own fact checking and their research quickly so that they can debunk the sort of bullshit coming out of, you know, the 1 percent, the folks that would like to sort of crush any people’s movement”. .”

In relation to today’s election, Sanders’s support of social democracy has greatly evolved since the words of Marx and Engels.

Whether or not socialism will ever come close to seeing the success it did in 1912 again, it stands a chance of arriving in the White House in again, a much evolved state.

Sanders, a self-identified socialist democrat, has a chance of winning the 2016 presidential election. In a speech Sanders gave on November 19th, 2015 he gives his own definition of a socialist democracy.

“It builds on what Franklin Delano Roosevelt said when he fought for guaranteed economic rights for all Americans,” Sanders said. “And it builds on what Martin Luther King, Jr. said in 1968 when he stated that, ‘This country has socialism for the rich, and rugged individualism for the poor.’”

“[Sanders] more of a social democrat,” Mills said, “who believes in regulating capitalism and bringing about somewhat greater equality through welfare state programs.”

Tracing the past of socialism in the United States shows how the principle came to be interpreted the way it is today. Marx and Engels would not recognize many of the principles put forth by Sanders democratic socialism, and even some of Soltysik’s socialist USA ideas. Through the many characters and identities socialism has played, there were tragedies like wrongful imprisonment, and hope delivered through promises of democracy and change.

Sophie Johnson is a freshman journalism major who knows better to move into the future without reflecting on the past. Email her at sjohnson3@ithaca.edu.