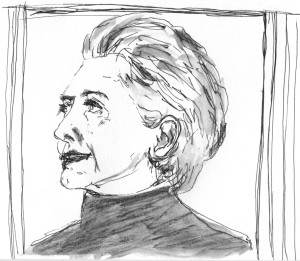 Early reviews have been glowing, with critics going so far as to call it “the boldest youth-outreach attempt since Mitt Romney quoted ‘Who Let the Dogs Out?’” Taking mixtape website DatPiff by storm, it has maintained a solid five-star rating. The popularity has confused the majority of users, who have submitted countless negative reviews. Upon further inspection, it appears a disproportionate amount of support comes from superdelegate reviewers.

DJ Khaled also offered his unsolicited opinion, calling it “major ????” and simultaneously announced his intent to run with Former Secretary of State Clinton as her Vice President. Citing his passion for voter’s rights [“they don’t want you to vote”] and diplomatic experience, Khaled quickly turned to Instagram to celebrate his purported success: “I’m on the phone with the CEO of the DNC he’s telling me khaled #hillarykhaled2016 only been on Twitter for 1hour and u getting donations like crazy my staff is telling me the servers is about shut down I gave them the ok to add the most powerful servers to handle this #hillarykhaled2016 congrats looks like more votes for U khaled #sufferingfromsuccess #wtb”

Clinton’s campaign has yet to comment on Khaled’s announcement.

When asked about the mixtape, Clinton hesitated, looking momentarily confused. She then grinned, asking “Is this one of those prank videos?” An intern was sighted behind her, putting a finger to his lips and shaking his head at the interviewer.

I love me some emojis, that’s a fact!
Just focus on my Snapchat, shit be wacked!
Don’t ask me where I been or what I backed,
‘cause I voted “Yes” on DOMA and the Patriot Act.

DMX Snapchatted the back of the mixtape, revealing the tracklist. He could also be faintly heard, saying “What the [expletive] is a emoji?”
? C.R.E.A.M. (Coin-flips Rule Everything Around Me)
? Bitch, Don’t Kill My Bribe
? 99 Problems (But the Rich Ain’t One)
? Banksta’s Paradise
? Troublesome ‘06 (feat. Super-PAC)
? Sucker D.C.’s (feat. Run-D.N.C.)
? Welcome to the World of Plastic Speech

Will Uhl is a junior journalism major who would briefly consider buying Clinton’s mixtape (but would probably just download it for free later). You can email him at wuhl1@ithaca.edu.