RAW FROM THE SAW: Youth 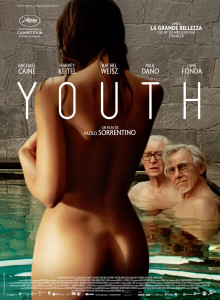 Paolo Sorrentino’s Youth is bookended by music, opening with a knockout pop song from The Retrosettes and ending with an orchestral number elegantly vocalized by Sumi Jo. Appropriate, given that the film’s lead is retired orchestra conductor Fred Ballinger, played with class and command by Sir Michael Caine.

Though he’s far removed from the audiences and the concert halls, Fred continues to conduct. However, the instruments in Fred’s new orchestras are limited to the cowbells and moos of grazing bovine, the sounds of birds in the woods and a plastic wrapper Fred seems to carry with him everywhere.

The setting is the Swiss Alps at a luxurious hotel and spa that Fred has been going to for 20 years.

Also at the hotel is Fred’s daughter, Lena (Rachel Weisz), and his best friend, the Hollywood writer/director Mick Boyle (Harvey Keitel). Lena is keeping her father company and Mick is working day and night with a crack team of young, ambitious writers to come up with a new script, his “film testament,” he likes to call it.

Adding heaps of personality to the film are Paul Dano as a world-famous actor known best for playing a robot, Roly Serrano as a former soccer player with a belly the size of a small elephant and the radiant Madalina Diana Ghenea as the sharper-than-she-seems Miss Universe.

At its best and most calming, Youth is quiet movie with restrained, subtle direction. Luca Bigazzi’s beautiful cinematography flows from one shot to another, and the poetic dialogue bounces from character to character with ease as men walk about the countryside discussing Novalis and the plague of old age.

But Youth also has an edge to it — a punch-out-a-window, throw-the-TV-off-the-balcony edge to it. Yes, there are times when Youth lets go of the reins to its own chariot and the horses enter mach five, careen into walls and collapse into seizures.

The screams of old people shagging in the woods. Jane Fonda swearing like a sailor and punching a flight attendant. A ludicrous, over-the-top pop music video starring Paloma Faith stripping on the top of a speeding car. At times, it’s a bit difficult to imagine that this is the same movie in which Sir Michael Caine and Harvey Keitel walk through grassy fields chatting about philosophy.

But the polar oppositions are what make Youth so engaging. For every scene concentrating on Keitel’s vivacious group of writers, there’s a depressing long take of naked old people sitting in a sauna room, as if they’re just wasting away, evaporating into the steamy air.

To be clear, all of these points are positives. Sorrentino fills his film with realism as Caine and company show their age, reminding us of their mortality. Yet, Youth also features plenty of the surreal — there’s more than one dream sequence and, when the characters are in reality, the hotel takes on an otherworldly character all its own. Sorrentino achieves the perfect balance, like having one’s cake and eating it too. (If your cake is made of naked old people, that is, of which the film has plenty.)

The only bump in the road can be credited to a questionable child performance, but one mediocre child actor does not a bad movie make — we can’t all be Jacob Tremblay, after all. In fact, this is a near-perfect film. Youth is beautifully photographed, brilliantly acted and dripping with humanity. I’ve seen it three times already and I can’t wait to see it a fourth — and hopefully chisel away more meaning from Sorrentino’s masterful work.

It is, of course, incredibly dense and also surprisingly fun, definitely worth three or four watches, unless naked old people creep you out or you’re frightened easily by Jane Fonda in heavy makeup. Don’t worry: she scares me too.