RAW FROM THE SAW: Blackstar 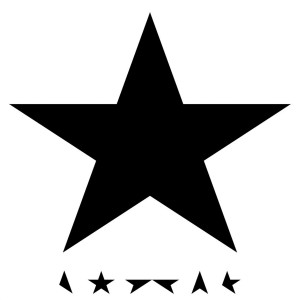 Blackstar is David Bowie’s parting gift to the world, a cold and divinatory work of art that showcases just how versatile he was. Even up to the last days of his life, Bowie was breaking boundaries. It’s the type of album where songs need to be played over and over to be fully grasped — if you’d even call the absolutely vivid tracks in this album something so plain as “songs” — and have new details to pick up on with every listen. Like a carefully crafted film, Blackstar is multi-faceted miracle; certainly not an easy listen but a piece of art that’s more than music. It’s a mystical picture of life and death and everything in between.

“Blackstar” and “Lazarus,” the two pre-released singles of the album, were absolutely the right way to sell this record. Definitely two of its strongest tracks, both emit the darkness and discomfort that Bowie was certainly feeling, given his rapidly declining health and secretly impending transcendence to the great beyond. It’s really astounding how eloquently death is depicted in this record. Wildly unsettling imagery present in the “Blackstar” music video emphasized by Bowie’s gentle delivery of the lyrics and droning saxophones in the background all tells of the enigmatic “villa of Ormen,” which Bowie’s character seems to be confined to, blinded and restrained by a cloth over his eyes and ties to what seems to be a hospital bed at one point. The music itself, too, conjures up some fascinatingly disquieting images in the listener’s mind. Bowie as becomes a spiritual guide through the distant, dark planet of death and claustrophobic mystery. The music and videos for this song and “Lazarus,” the other single of the record, are certainly worth a look and listen as they transport listeners through worlds and emotions that only further enhance Bowie’s story.

“Girl Loves Me” and “Dollar Days” are some other standout tracks from this record. “Girl Loves Me” gets a special shout-out for its surprising “Where the fuck did Monday go?” line and “Dollar Days” for its exciting similarity to some of Bowie’s earlier, poppier songs; it almost sounds like it could be off of Hunky Dory or Scary Monsters (And Super Creeps) in the classic-Bowie sense.

Blackstar certainly does its job as Bowie’s profound goodbye to Earth. It’s something brand-new and different from anything he’s ever done before, despite being an artist who’s already broken virtually every boundary in his lifetime. Saying goodbye to Bowie is certainly sad, but Blackstar can comfort us in his death because he’s truly proved his ability to do it all.