From the androgynous, folksy-looking Hunky Dory-era to the ever-famous Ziggy Stardust, David Bowie never took a seat in the shadows. Few have broken the rules the way Bowie did, and few have managed to create as many personas. It almost seems as though every album, every friend, and every trend introduced a new character and a dive into a new fashion. Davy Jones, Bowie, Ziggy Stardust, the eye-patch donning Rebel, giant-tie-wearing Diamond Dog, the Thin White Duke, the Idiot-era friend and confidant of Iggy Pop, “Let’s Dance” era creamy suit guy, weird soul patch 90s Bowie and of course, the eerie Lazarus that he became near the end of his life, but really, the list could go on.

Perhaps the most important person in David’s childhood was his older half-brother, Terry Burns. Terry was David’s role model as well as friend, and introduced him to many of the mediums and inspirations that helped in the creation of David Bowie, the extraterrestrial artist. This was when David got his first taste of the London music scene that he would later go on to dominate. 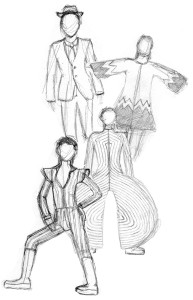 Another role model of David’s was Little Richard, a fashion icon of his own, who donned bold styles such as sequins, fringe, rhinestones, headbands and capes, all things Bowie would adopt in his own career. Bowie once said, “I’m more like a tasteful thief. The only art I’ll ever study is stuff I can steal from.” Although some might think Bowie was the first modern artist to dress the way he did, he even said himself that he “wanted to be a white Little Richard at eight.” Little Richard’s androgynous looks and lyrics inspired David to begin exploring with his own look, and so began the art.

One moment in particular that changed David forever was when he got in a fight at school with his friend George Underwood over a girl. George punched him in the face, hitting his eye and causing serious problems. After treatment, one pupil remained permanently dilated, giving the effect that David had two different colored eyes. Recovery from this kept him out of school for months, meaning now not only did he look different, but he had also missed four months worth of school. He also felt different due to a history of mental illness in his family, his mother and half-brother suffering from schizophrenia in a time when there was far less acceptance and far more shame attached to mental illness. In an interview, Bowie said, “there’s an awful lot of emotional and spiritual mutilation that goes on in my family.” The point of all this being, he felt more alone and outcast than ever at this point; in fact, David felt so different from everyone he decided to cut his losses and throw away all notions of conformity.

After experimenting with his look throughout his teenage years, and playing with his first band, Davy Jones and the Lower Third, Bowie was finally ready to emerge. By 1971, Bowie was exploring fully with fashion, particularly what he is known the best for, androgyny. Seen in a photoshoot for one of his earliest (and best) albums, Hunky Dory, Bowie donned long hair and feminine-tailored clothing, sometimes even performing in a frock. Bowie was truly one of the most groundbreaking fashion icons out there in the 70s, and a true prophet of the glam rock movement. Inspiring youths to dress differently, and to stray from mod-culture and discover their own masculine and feminine sides, he and other artists (i.e. Freddie Mercury, Brian Eno, David Johansen) won over a generation of people who may have never even fathomed such an idea.

Of course, Bowie’s most iconic and well-known persona is none other than Ziggy Stardust, an alien man thought to be inspired by both Iggy Pop’s raging stage presence and, of course, Bowie’s own obsession with the extraterrestrial. The space race in particular gave great influence to him as glam rock’s resident spaceman, inspiring songs like “Life on Mars,” “Space Oddity,” “Born In A UFO,” “Hallo Spaceboy” and many others, including iconic music videos as well, like “Ashes to Ashes.” As much as the Space Race rocked the US and Cold War, it also rocked Bowie’s childhood in a way that brought him to base an entire personality off it. Ziggy Stardust and the Spiders from Mars toured from ’72 to ’73, certainly turning heads as the center of Ziggy’s presence was his outlandish clothing.

The point I’m trying to make here is really just that: Wow.

David Bowie was one of the best and weirdest beings to ever walk this planet. And as an artist, I’d say the same. David Bowie changed an entire industry, merging fashion with rock & roll in a way no one ever has, and likely no one ever will again. But really when it all comes down to it, who it’s all owed to is that little boy in Brixton who felt like he just couldn’t fit in.

Laura Miller is a freshman exploratory major whose motto is, “Why have a life crisis when you can just change your look?” You can email her at lmiller@ithaca.edu.