I walk across a small bridge and make my way along the main path of the village, winding through the middle of the houses in the community. The houses themselves look rather odd, brown and black wood paneled with large windows to let natural light in and industrial steel roofs. I hear the sound of children playing in the distance, ignoring the cold weather, and see people working on clearing snow from the pathways. Although it is mostly quiet, time seems stagnant as I make my way to the community house to help make dinner.

This is the EcoVillage at Ithaca, home to over 200 people who, since 1991, have chosen to alter their lifestyle to help try to conserve the Earth. Here, it is an expectation that residents compost food, share what they have and plant their own garden — as every home comes with its own plot of land specifically for gardening. Here, it is important to give back to the community and make a change in the world.

Gabe Shapiro, a sophomore at Hampshire College, has lived practically his entire life in the EcoVillage. His love for the EcoVillage has only expanded since he came to college, he said in an email. Gabe looks back fondly on his childhood memories of growing up next door to his best friends, playing games outside and sharing community meals, all the while feeling safe and protected surrounded by an extended family of community members. The childhood he experienced at the EcoVillage is one he’s glad he got the chance to have, Gabe said.

The EcoVillage also formed the way he views the world as Gabe said he studies global energy politics, climate change and community organizing at college. It has given him a sense of purpose and meaning in life. He said he seeks a world of justice and peace like he found in the EcoVillage. There, he interacted with people who love and care for their neighbor’s well-being and are constantly striving to be more sustainable.

“People in the EcoVillage encourage each other to live more wholesome lives,” Gabe said. “It is like a step forward in culture, in bringing our collective culture towards a more balanced way of life.”

Elan Shapiro, Gabe’s father, moved to the EcoVillage soon after it began. He owns the village’s bed and breakfast in addition to working with grassroots organizations aimed at improving Ithaca. When he moved to the village, Elan said he was absolutely floored by the quality of the people there and the impact of a strong intention.

“Even in the beginning, there was a sense of inspirational vision and idealism and comradery, with close proximity to town on this incredible piece of land that captured the creative energy of the people in town,” he said. “That, in a sense, has continued on.”

Elan said people in the EcoVillage are knitted together with a common goal to live a healthier, greener life. Co-community sharing is a common practice in the EcoVillage. Residents organize community meals, have ping pong tournaments, share speciality skills and even have set up an entire thrift store in order to decrease their waste, Elan said. They have developed a whole set of recreational and spiritual things they do together, he said. Additionally, he said the EcoVillage has an email system where people can ask for anything they need help with.

A project the people in the EcoVillage work on to improve the environment and bond as a community is planting new trees for future generations to enjoy, Elan said. American chestnut trees were recently almost wiped out and now the people in the EcoVillage are breeding American and Chinese chestnut trees together to try to help address this problem.

The green living the people in the EcoVillage engage in seems to be far easier when living with so many other people who share the same passion for sustainability and environmental activism. The EcoVillage is different than other places in the world because living there means making a commitment to helping the Earth, treating people more equally and being a part of something much bigger than yourself, Gabe said.

Living in a co-housing community such as the EcoVillage brings people together to make these goals achievable. Co-housing communities are private homes that are close together but have shared spaces, like a common house where people can go to socialize and be together. There seems to be a sense of camaraderie and harmony that exists from years of the people in the EcoVillage living together. In return, the EcoVillage demands a wholehearted commitment to bettering the world and sustaining the Earth for future generations.

“Let go of your ego!” Gabe said. “Living in community means making sacrifices for the common good. The EcoVillage is a learning model. It was designed to showcase what co-housing can be and all the different amazing things that can come out of it.

Faith Meckley, a junior at Ithaca College, recently moved into the EcoVillage. She said she loves living in the EcoVillage because of the difference in the culture. Meckley said she chose to move to the EcoVillage after experiencing a whole new outlook on life during The Great March for Climate Action, a cross-country march she participated in during 2014. The journey started in California and went all the way to the East Coast, with people walking and camping across the country in the name of protecting the environment.

Meckley said that she noticed a strong sense of community that totally reshaped the way she looks at people. She said she is extremely happy with her decision to live in the EcoVillage and finds it very peaceful and relaxing to live in a community where people say “hi” to each other on the streets and share a common outlook on life.

“It’s nice to go home and not have to explain sustainability and environmentalism to each other,” Meckley said. “It is nice to have people who understand and are passionate about that. We don’t have a planet B, this is the only one we got.”

Meckley’s favorite parts of green living in the EcoVillage includes the use of solar panels, composting, recycling and a plentiful amount of organic foods.

“It’s like you go grocery shopping in your backyard,” she said.

Meckley said she has had a very positive experience living in co-housing and intends to live in co-housing communities just like the EcoVillage for the rest of her life.

Eric Perreault, another resident of the EcoVillage, said he enjoys living in the EcoVillage because of the peaceful atmosphere. Perrault said he loves the break from the hustle and bustle of life in the City of Ithaca and finding someplace quiet to relax and rest in the beauty of the EcoVillage. He has come to enjoy the simpler things in life, including appreciating nature and the community. Perreault said it is like having his own extended family there with him and always supporting him.

“Houses used to be like islands to me, but here in the EcoVillage, you actually see all your neighbors a majority of the time and people always stop to say hi,” Perreault said.

Another aspect of the EcoVillage that fascinates Perreault is the social structure that exists between the youth of the EcoVillage and the elderly. He said the way society treats the aging population is unnatural and needs to be fixed. Perrault said he dislikes the idea of putting someone in a “home” whenever they become an inconvenience or too disabled to function on their own.

However, the housing arrangement at the EcoVillage is set up in a way that allows an active engagement between older and younger people, Perrault said. At the EcoVillage, the older generation seems very involved in the community and socializes with everyone around them.

While eating dinner, the young and old mix together to have engaging conversations with each other and share their wisdom. The community mindset seems to encourage creativity and new ideas, as well as preserve the ones that exist for future generations. 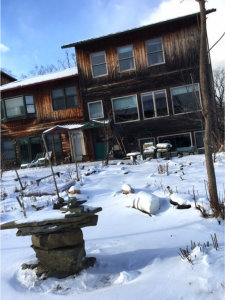 The older people of the EcoVillage were excited to share their stories and experiences with the younger generation as well as learn about new activities and ideas. The EcoVillage often hosts after-dinner lectures, discussing hot topics in the world and bridging the generation gap.

Additionally, a mix of youth and older generations work together to create the meal they ate for dinner the day I visit. They served homemade quinoa spoon bread, chilli and a fresh salad — all made with ingredients from local, organic sources.

To the outside eye, the EcoVillage may just seem like a funny-looking neighborhood. However, it is filled with people who are full of life and ideas. They take pride in their community bond and support each other in their endeavors. Elan, Gabe, Meckley and Perreault agree that the EcoVillage has the drive, willpower and resources to make change happen in the world. Its residents strive to improve society for the better and be an ecological role model for the future of green housing and sustainability.

Katie Siple is a freshman integrated marketing communications major who will be taking frequent trips to the EcoVillage. You can email her at ksiple@ithaca.edu.