The problem with genetically engineered crops 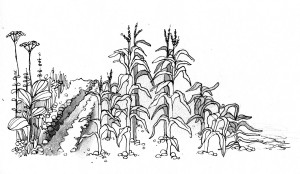 “We understand the importance of accessibility to a balanced meal, which is why we are working alongside farmers, researchers, and other experts to come up with a range of sustainable solutions to help nourish our growing world,” says Monsanto’s home page.

Monsanto, one of the largest producers of genetically modified (GM) crops, plants 282 acres globally, according to the Organic Consumers Association. However, according to the media group Soyatech — a consulting and media firm — only 2 percent of GMO soy is actually eaten by people.

A 2014 Mother Jones article by Tom Philpott stated that Americans don’t eat much soy directly, but that doesn’t mean we’re not exposed to it.

“After harvest, the great bulk of soybeans are crushed and divided into two parts: meal, which mainly goes into feed for animals that become our meat, and fat, most of which ends up being used as cooking oil or in food products,” the article said.

Alicia Harvie, the advocacy and issues director for Farm Aid — a nonprofit anti-GMO group — stated, “The grand promises made by the biotech industry that GMOs will save farmers money, increase crop yields and even ‘feed the world’ have not panned out. Many farmers are disappointed by GMOs, finding mixed yield results or facing new problems in the extremely concentrated and corporate-dominated seed sector.”

An increase in the cultivation of GM crops leads to a decrease in biodiversity. Genetically modified crops are replacing their traditional counterparts at rapid rates, and eliminating the need for similar organisms.

Since the 1900s, according to the Food and Agriculture Organization of the United Nations, “75 percent of plant genetic diversity has been lost as farmers worldwide have left their multiple local varieties and landraces for genetically uniform, high-yielding varieties.” Currently, 75 percent of the world’s food is generated from just 12 plants and five animal species, according to the organization.

The organization also states that “Of the 4 percent of the 250,000 to 300,000 known edible plant species, only 150 to 200 are used by humans. Only three — rice, maize and wheat — contribute nearly 60 percent of calories and proteins obtained by humans from plants.”

These figures show an already small core of food production and consumption.

And GM crops will further shrink the number of species being grown. Heather Landry, a Harvard University graduate student studying the behaviors of GM crops in society, said: “One thing to keep in mind is that a lot of the problems we see with biodiversity stem from the agriculture industry itself rather than just genetic engineering.” Genetic modification exacerbates the decrease of biodiversity.

Genetically modified crops are gaining popularity and taking resources away from their traditional counterparts, Landry said. Landry continued by saying, “It is possible to genetically engineer multiple species of a plant or animal, but there is no certainty for that to actually happen. It takes time and labor to produce a successful GMO, so the engineered trait is not likely to be introduced into many species/varieties of the same plant or animal.”

Because of the difficulty of producing a successful grouping of genes, less variations of a new GM crop will be created, Landry said, and this could contribute to reduced biodiversity.

This can be related to the statistics from the Food and Agriculture Organization of the United Nations, which illustrates an alarmingly small group of plants being cultivated that appear in the food supply.

This subsequent lack of biodiversity is harmful in two ways.

First it impacts global economics. According to the Center for Research on Globalization, at home, farmers are seeing less of a profit than they were five years ago. As Dr. Don Huber, professor emeritus of plant pathology and botany at Purdue University, said: “There is nothing in biotechnology that has increased the intrinsic yield potential of any crop. Instead, there is a consistent yield reduction when the integrity of the normal genetics is disrupted by genetic engineering.”
Basically, GM crops are reducing how much domestic farmers are producing.

Abroad, monocropping — the practice of planting the same crop on the same plot season after season — is destroying vital topsoil, the part of the soil containing most of the living organisms, and therefore destroying large portions of supply for the international grower, according to an article in The Inspired Economist.

As local Tompkins County anti-GMO advocate Ruth Williams said in an interview: “There seems to be this thing where in this big business world of companies such as Monsanto, they can patent these seeds, and what happens of course is that the farmers buy these seeds from Monsanto and then they have to sign a waiver saying that they’re not going to keep the seeds, and that they’re going to buy from them every year.”

In the coming decades, we may develop a better way to farm sustainably and affordably. But at present, it is clear that the already limited usage of conventional farming techniques and increased production of GM crops in our food supply are creating a power vacuum and eroding the already shrinking amount of the world’s green space. And all the while they are failing to accomplish the intended goal of feeding a growing global population.

Anna Lamb is a freshman journalism major who believes labeling is king. Email her at alamb@ithaca.edu.