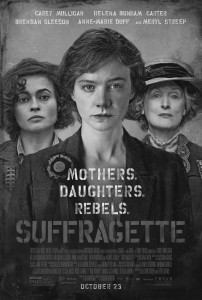 Suffragette is a sometimes-poignant, sometimes-stagnant film from director Sarah Gavron that captures the early sparks of the feminist movement in 20th century England. Carey Mulligan plays Maud, a young laundress who becomes a foot soldier for the movement alongside her friend Violet (Anne-Marie Duff) and organizer Edith (Helena Bonham Carter).

As the movement gets bolder and bolder, something in Maud catches fire and she volunteers for dangerous missions bombing postal boxes and houses in radical attempts to secure the vote.
Mulligan and Bonham Carter are scene-stealers and their performances are brilliantly nuanced and understated. As for the other actors, there’s the phenomenal-as-always Brendan Gleeson as an inspector intent on shutting down the revolutionists. Unfortunately, it’s a throwaway role that even a great actor like Gleeson has visible trouble inhabiting. Ben Whishaw is very much in the same boat as Maud’s exasperated husband. It’s a wonder why he’s here. After all, it’s not like he needs the paycheck.

And then there’s Meryl Streep. Streep is one of the three women on Suffragette’s poster and her name is everywhere for this movie. So, imagine the disappointment of a devoted Meryl Streep fan when they go to see Suffragette and discover that she is only in it for three minutes, tops, before being shoved in a cab and whisked away, never to be seen again.

And that’s perfectly fine, because it leaves more room to focus on themes of courage, familial loyalty and rebellion. Yet the script focuses too much on hitting the historical beats, so it can’t delve deep into its themes in a meaningful way, instead simplifying the morality and resulting in a very shallow experience.

To make matters worse, about 80 percent of the movie is filmed in a Hunger Games shaky-cam style, courtesy of cinematographer Eduard Grau. It works for the intense rally scenes, but some of the quiet scenes are shot as if the cameraman was riding a unicycle and trying his damnedest not to fall off.

When the camerawork calms down and lets the audience take in the environment, the film is really quite beautiful. The locations are gorgeous, the production design is immaculate and the costumes feel ripped right from the era. It’s a shame we can’t make it out most of the time, because our cameraman is a finicky monkey with a GoPro strapped to its head.

It’s a fine feminist film with terrific performances and some powerful scenes, but the pacing, casting, writing and cinematography all get to be too much after a while and the whole thing just falls apart. Though it probably won’t stop Meryl Streep from getting an Oscar nomination for this movie.