Presidential candidate is capable of solving every crisis out there

Everyone can probably #FeelTheBern nowadays. Perhaps it is because, for the first time, a presidential candidate isn’t ignoring the youth like almost every other candidate has done in past years. In the Democratic debates he has talked to middle class Americans, and it actually doesn’t feel like he’s trying to kiss our asses.

Not to mention, Sanders is looking exceptionally better than the Republican nominee stars: Ben Carson and Donald Trump. With Ben Carson’s bold and rather dumb statement, “You know Obamacare is really I think the worst thing that has happened in this nation since slavery” and Donald Trump’s call for a giant wall being built on the U.S.-Mexico border.

The hero for all liberals, Sanders, said he can and will fix this mess of a country. From the ridiculous wage gap caused by the evil one percent that controls most of the United States’ economy, giving less power to corporations, increasing wages, being a basic human being, to free college education. Sanders is the hero we’ve all been waiting for! 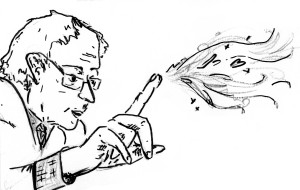 I even heard he helped a girl find her lost iPhone.

Sanders is like Norm Kelly, the Councillor of the city of Toronto, who became extremely famous on Twitter because he defended rapper Drake during a Twitter fight between him and the less known rapper Meek Mill. (Don’t lie, you know who he is).

In the history of America, we’ve never had a president that was so supported by the youth. Sanders recently passed a bill to try to legalize marijuana not just for medical use, but for recreational use as well. Name any social issue you want, and you probably agree with his policies. Women’s rights? he demands it! Racial Justice? Of course! Climate change? Go green! Equality for LGBTQ? Indeed! Also, he even sang a cover of “This Land Is Your Land,” and it’s not too shabby either. Sanders honeymooned with his wife Jane in the former Soviet Union. I don’t know about you, but that’s pretty badass, especially because he did so during the Cold War! The man wasn’t afraid of anything.

You can almost say that he is everyone’s personal hero (or big brother, whatever…)

Sanders will make sure you don’t run out of milk after you’ve already poured your cereal into the bowl.

Sanders will help you with your U.S history research paper AND even tell you how your high school’s awful history textbook is outdated and problematic.

Sanders will smoke a joint with you when you’re trying to chill and watch his favorite movie: “Dude, Where’s My Car?”

Is Sanders a vegan? I wouldn’t be surprised, but even if he isn’t, he probably shops at Whole Foods and has soy lattes with your mom before leaving the store.

You can also give him a nickname! Here’s some of the most popular ones: Bernice, The Sandman, and the Vermont Bonecrusher. Bernice if you’re looking for something more feminine.

He just seems to fascinate us, and that’s why most of the millennials and ’90s kids have grown so obsessed with him. He gives our generation hope for politics that deal with the betterment of our country. He sort of reminds you of the grandpa you wish you had — the one that wasn’t racist.

Juliana Ardila is a freshman documentary studies major who will not cool it on the Bern. You can email her at jardila@ithaca.edu.