Rochon adamant that he will not resign 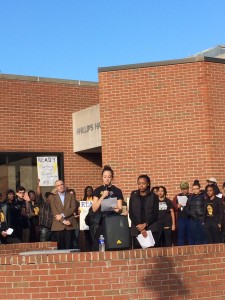 Approximately 300 students gathered around Free Speech Rock Dec. 11 to demand Ithaca College President Tom Rochon resign. Organized by the student activist group POC at IC, which stands for People of Color at Ithaca College, the “Demands Walk-out” called for students to wear all black, leave their classes at 1:10 p.m. and walk to Free Speech Rock to hear the demands of the group and “observe Tom Rochon’s display of incompetence to lead as President of our institution,” according to the Facebook event description.

The first demand, a demand that POC at IC said is non-negotiable, is Rochon’s resignation as president for failing to create a safe and inclusive campus environment. However, after the event Rochon said he is not considering resigning.

Other demands included an amendment to the college’s policy that would allow students, part-time and adjunct faculty, full-time faculty and staff to elect a new college president through a democratic process. This demand also listed qualities that are necessary in a college president, including but not limited to the “respect for the human dignity of all students, faculty and staff of color” and a president who is accessible, approachable, empathetic and competent in working with people of different backgrounds.

Additional demands stated were the immediate tenure of Derek Adams, an assistant professor in the Department of English, and certain other faculty members who have made constant efforts at inclusivity in the college environment.

The fourth demand stated that any student, faculty and staff member who have voiced their support and solidarity with the movement go unpunished in their actions, so as to not jeopardize their job and financial stability. A POC at IC member said if this demand is not met, the group will “escalate their response.” The final demand called for increased transparency between the Board of Trustees and the campus community.

The event comes on the heels of several student protests this semester that have brought attention to what many students and faculty are calling a poor racial climate that negatively impacts students and faculty of color and a lack of volition on the part of the administration and Rochon in addressing these issues.

Events such as the racially charged “Preps and Crooks” party theme hosted by the fraternity Alpha Epsilon Pi and the referring to an alumna of color as “the savage” several times by two white alumni during the “Blue Skies Reimagining Kick-Off Event” on Oct. 11, have only served to exacerbate and further illuminate the issue of racial tensions on campus. On Nov. 11, POC at IC held its first walk-out calling for Rochon’s resignation. Over 1,000 students attended that rally.

This week, beginning Dec. 7 at 9 a.m., members of POC at IC began an occupation of the Peggy Ryan Williams Center, the primary administrative building on campus. Over the course of the week, students have slept in the building and facilitated teach-ins. At the Demands Walk-out, POC at IC said they would continue to occupy PRW over the weekend.

Even prior to this academic year, other events have been pinpointed by students and faculty as evidence of Rochon’s inability to cultivate a safe and inclusive environment for members of the campus community. To further contextualize the rise in student activism this semester, students have pinpointed the delayed release of the results of the Campus Climate Survey — in which the survey was conducted in 2012, but results were only released during the Spring 2015 semester after pressure from the campus community — and research conducted by a former student about the experiences of African, Latino/a, Asian and Native American students on campus that showed a majority of ALANA students face racial microaggressions on a constant basis.

The Dec. 11 protest began at 1:04 p.m., when about 40 members of POC at IC left PRW and walked to Free Speech Rock, where they stood and waited as students began to pour out of their classes and surround the area. Several of the protesters held signs reading: “Ready for historic change at IC,” “Ready for Tom Rochon to go and faculty to unionize,” “Ready to reclaim our rights, dignity, justice” and “Ready to raise our voices for racial equality.” These signs were a replication of the college’s consistent advertising initiative to promote the academic accomplishments of its students.

In addition to students, several faculty members and high-level administrators, including Rochon; Benjamin Rifkin, provost and vice president for educational affairs; and Roger Richardson, associate provost for diversity, inclusion and engagement and interim chief diversity officer, stood on the steps outside Campus Center.

Following the chant, POC at IC asked for Rochon to approach the stage.

“We would like to call upon our soon to be ex-president, Tom Rochon, to please approach the stage.”

Rochon, however, remained planted on the steps of Campus Center.

“Are you afraid of approaching students on this campus? We are not afraid of you, and we would like you to please approach the stage,” a POC at IC member said.

After several attempts to ask Rochon to approach the stage were met with silence, and several repetitions of the “Tom Rochon, resign” chant, the president, while remaining in his original position, utilized a megaphone to verbalize his thoughts and communicate with the protesters. 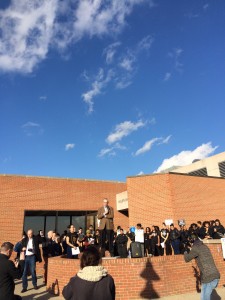 What Rochon referenced is an exchange that occurred the night of Dec. 10, in which a student intercepted Rochon as he was about to leave the PRW building. The full interaction can be viewed here.

A member from POC at IC responded by saying: “If you would like to engage in dialogue, you must first listen. And if you are too afraid to stand up on the stage with several members of our IC community, then I think that speaks volumes for the kind of leadership that you presented.”

Sophomore Julianna FitzSimons said Rochon’s use of a megaphone was disrespectful.

“I felt Rochon was very passive at this rally,” FitzSimons said. “He has this facade of caring, but when it comes down to it, he just doesn’t.”

After several minutes of back-and-forth exchanges, Rochon approached the stage, walking through a pathway the students created for him. He stood in the middle of the protesters, as several members of POC at IC took turns providing reasons for their support of Rochon’s immediate resignation.

“Dialogue involves listening and responding,” a POC at IC member said. “In our efforts to grow in our consciousness, we have done much research, and this research has led us to the conclusion that you, Tom Rochon, do not have the emotional intelligence, systems thinking abilities, interpersonal skills or leadership skills to confront the problems we face. You do not have the skills to implement any progressive or effective changes going forward, nor do we think you have the skillsets to even diagnose the problem.”

The POC at IC member repeatedly called for Rochon to recognize his limitations. The member then referenced a quote from Assata Shakur regarding oppression.

“Nobody in the world, nobody in history, has ever gotten their freedom by appealing to the moral sense of the people who are oppressing them.” 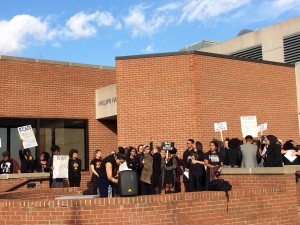 The POC at IC member continued, saying a distinct culture has been created at the college.

“What we see at Ithaca College is the breeding of a culture of silence, which also breeds distinct forms of incomprehensible, psychological violence,” the POC at IC member said. “This violence invalidates and experiences and co-opts student energies to contribute to this grander, liberal facade that perpetuates notions of post racial fallacies of inclusion.”

The POC at IC member continued to discuss how the grassroots movement allows for an end to the current top-down structure of the college administration. After passing the microphone to another POC at IC member, the dialogue shifted to discussing Rochon’s role as chairman of the Board of Directors for Tompkins Financial Corporation, and how this additional role takes up hours that could be devoted to the college and provides yet another reason why Rochon is unfit to continue serving as president of the college.

“You were aware of a potentially volatile campus climate through the campus survey and protests that occurred during the 2014–2015 school year,” a POC at IC member said. “But the $90,000 a year that the bank advised you for your services illustrates how little you care about the Ithaca College community in its entirety. Because of these actions, we are demanding your resignation. Tom Rochon, recognize your limitations.”

Following this, several other members of POC at IC took the stage, focusing on Rochon’s statements made during his inaugural speech on April 17, 2009, called “Reclaiming the Social Compact.” Several sections of this speech were quoted to reveal Rochon’s hypocrisy during that speech when juxtaposed to his current attitude and lack of action regarding problems that have pervaded the college campus for years.

A member of POC at IC also brought up Richardson’s administrative role on campus, implying that his job was a representation of tokenization by having a black administrator be the primary figure handling the heavy task of dealing with issues of diversity.

After this, Rochon was given a little over two minutes to speak. In addition to discussing the importance of dialogue and community, he also addressed the claims made about his role on the Board of Directors for Tompkins Financial Corporation and said they were untrue. Rochon said he is committed to the college.

“I want you to know that I am all-in for Ithaca College,” he said.

In an interview following the rally, Rochon said he understands that students want to hear from him, but he said he can’t fix campus issues alone.

After the rally, Gerard Hector, vice president for finance and administration at the college, told POC at IC members that everyone needs to take a step back in order to recognize the problems on campus.

“You are not going to solve this issue in this manner because we lack the economic clout in its essence to deal with it,” Hector said. “Leave Tom Rochon? Get someone in? Get someone at the head of the organization? Yeah, sure … but the belief structure is still the same. But here’s the problem: No one engages,” Hector said, referencing a lack of dialogue between students and administrators.

Rochon agreed that peaceful discourse is necessary in order to rectify the racial climate on campus.

However, freshman Chris Barnes said he has heard there have been several years of trying to communicate with the administration, yet major conflicts and issues brought up by the student body have yet to be addressed.

“There has been five or seven years of conversation trying to take place between faculty, staff and student organizations and the failure to communicate on his [Rochon’s] behalf,” he said.

At the end of the rally, it was clear that POC at IC was not swayed by Rochon’s statements either. They led protesters in chanting, loud and clear: