Students Vote No Confidence in Rochon

Vast majority of ALANA students have qualms with the embattled leader 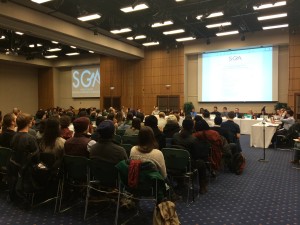 Senior Dominick Recckio, the president of the Ithaca College Student Government Association, announced Nov. 30 that 2,695 students voted no confidence in President Tom Rochon, amounting to 71.75 percent of students who responded to the SGA’s no confidence vote.

Just 27 percent — 1,019 students — responded with votes of confidence in Rochon.

Out of the 6,907 students who received the link to the no confidence vote, 3,756 students voted in the 26-day voting period — over half of the student body. 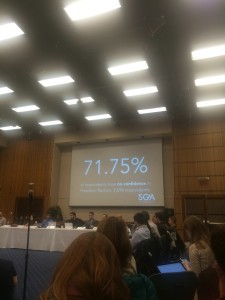 The vote occurred following a semester of upheaval and student protests, spearheaded by the group POC at IC — which stands for people of color at Ithaca College — regarding the racial climate at the college and incidents of alleged racial bias. POC at IC has demanded that Rochon resign following a series of racially charged events the group feels Rochon handled poorly. These incidents include controversial remarks made by Public Safety officers at the college, an AEPi party with a “preps and crooks” theme that many students found racially insensitive and racially charged remarks from two alumni who referred to a woman of color and alumna of the college as “the savage” at a meeting that was meant to “reimagine” what the college could look like.

Since then, additional issues of shared governance, a lack of inclusivity and a perceived top-down, dictatorial leadership approach from Rochon have also become issues brought up by students, faculty and alumni of the college.

The results of the no confidence vote were broken down by gender, race, as well as school within the college.

Recckio stressed the importance of the votes of African, Latino, Asian and Native American students at the college.

Out of the ALANA students on campus who voted, 86.83 percent voted no confidence in Rochon.

Out of white students who responded, 67.71 percent voted no confidence in Rochon. 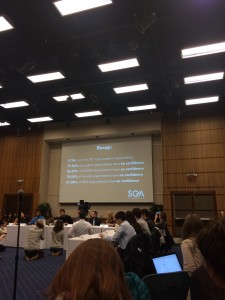 Beginning Nov. 30, a similar vote of no confidence held by the faculty at the college was initiated. That vote will end Dec. 11, with results to be announced on Dec. 14.

Grape and Lissy released a joint statement regarding the no confidence vote.

“This evening, the Student Government Association released the results of a student vote expressing a lack of confidence in President Rochon. As we noted before Thanksgiving, over the last couple of months, we have sought and received input from students, faculty, staff, alumni, and parents about the right course of action in light of recent events, and we continue to do so. The confidence votes are one way for students and faculty to make their views known to us, but community members have also shared thoughts and ideas with us directly, through in-person meetings and by email.

“We are grateful to the Ithaca College community for participating in this discussion. As the discussion continues, we ask the IC community to support civil discourse and an open exchange of ideas and perspectives as together we aim to improve the college that we all care for so deeply.”

The SGA also announced it will be holding “value sessions” during the common hour on Tuesdays and Thursdays beginning Dec. 1 until the end of the semester. These sessions are open to the public and will seek to assess what students value in a leader and a college president. For students who cannot attend the value sessions, an online survey will also be released. The ideas compiled by the value sessions will be aggregated by the SGA and given to the Board of Trustees as a means of holding the president accountable.

Senior Kyle James, vice president of academic affairs, said the strength of the vote’s results has the gravity to move the situation forward and influence a serious evaluation of the college’s current leadership.

Freshman Seondre Carolina, senator-at-large, said since the college is financially dependent on students’ tuition money — Recckio said 85 to 90 percent of the college is tuition-driven — and with the results of the vote of no confidence now released, the Board of Trustees must take seriously the students’ demands.

“If they want to run this college like a business, they’re going to have to listen to their students,” he said. “Without us, the college cannot function.”

Recckio said he believes the SGA served the student body well in conducting the vote of no confidence, and that the results proved an impactful point. He also said getting students involved with a system of shared governance will also be a focal point in moving forward from the results. With a high number of students expressing no confidence in Rochon, Recckio said the Board of Trustees needs to take the results of the vote seriously.

“I hope that they have the chance to really reflect on how important it is that we find a new president at Ithaca College,” he said.