The Fault in our Agricultural Geography 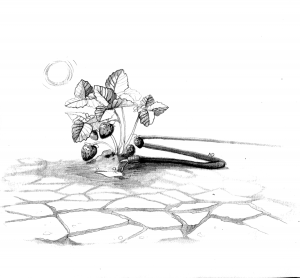 The United States’ largest agricultural hubs are located in dry climates and a lack of water is taking a toll on farming.

According to an article by Jay Famiglietti, published in The Los Angeles Times on March 12, California currently only has about one year of water stored, and the state government has put extensive water restrictions on its citizens and the many farms in the state as a result.

In an executive order published by the state of California on April 1, the state announced an urban water reduction of 25 percent through Feb. 28, 2016. The California State Water Board lists cutbacks that forbid activities like using water to wash driveways, using hoses with no shutoff nozzle and watering outside within 48 hours of significant precipitation. Restrictions on businesses forbid restaurants from giving patrons water without their request and mandate that hotels give customers the option to not have their towels laundered every day.

According to an article by Emily Alpert Reyes in The Los Angeles Times published April 5, even with California’s water issues, Gov. Jerry Brown, a Democrat, hesitated to put water restrictions on the agriculture industry of California.

Brown eventually took steps to reduce water usage by agriculture on June 12, forbidding farms from using any surface water. Water cutbacks on agriculture have not been so severe in the state since 1977, and these restrictions are expected to ruin 620,000 acres of farmland, according to an article by Jennifer Medina in The New York Times on June 12.

Some citizens have criticized Brown for hesitating to place restrictions on agriculture since it accounts for about 80 percent of the water consumed by the state, according to Medina’s article. This statistic is disputed by some, including Will Rodger, director of policy communications at the American Farm Bureau Federation — an independent organization that represents farmers in the U.S.

Rodger said half of California’s water goes to environmental causes, like preserving species. He said the 80 percent statistic is out of the 50 percent of water that is left for non-environmental issues.

According to the article by Reyes, Brown said he waited to put restrictions on farmers because agriculture had already been hit hard by the drought and more restrictions on water would force farmers on the lower end of the economic spectrum into unemployment.

Additionally, data from the Environmental Protection Agency showed California produces over a third of the vegetables and two-thirds of the nuts and fruits in the country. Given the water restrictions, the state faces questions as to whether it can still provide a huge amount of food for the country.

California is not the only state to have problems with agriculture’s heavy use of water. This is because agriculture centers in the U.S. are largely concentrated in dry climate areas. According to the United States Department of Agriculture, California and Texas make up two of the three top agricultural producing states in the U.S. and according to the Western Regional Climate Center they, are in extremely dry areas with very low rainfall.

As a result, farmers often have to turn to unsustainable farming methods like sprinkler irrigation and subsurface irrigation, which both waste huge amounts of water, said Tim Setter, a professor of soil and crop sciences at Cornell University.

This problem is only going to get worse. In a climate change prediction map released by the National Resources Defense Council in 2010, by 2050, three of the top five agricultural states –– California, Texas and Nebraska –– will be in high-risk zones for water sustainability.

Erin Riddle, the vice-chair of the Atlantic Chapter Farm and Food Committee of the Sierra Club, a grassroots environmental organization, said to fix the flawed farming system, the U.S. must shift farming to wetter climates. Riddle said one such climate could be New York because it has an abundance of water.

There is already a huge farming industry in New York, but it accounts for less than 1 percent of the state’s water usage, according to the New York State Department of Environmental Conservation. Bringing large agricultural businesses to areas like New York will provide water security and therefore be a more reliable and sustainable area to grow food, Riddle said.

Since entirely relocating the largest agricultural centers in the country would be an extensive process, there are other changes farmers can make to be more water sustainable. Setter proposed changing irrigation practices; instead of using sprinkler or subsurface irrigation, farmers can use furrow irrigation, Setter said.

According to the EPA, furrow irrigation is a system used to irrigate plants by digging channels between crops in which water flows. This is much more efficient and wastes less water. Setter said there are other things farmers can do as well to reduce their water usage.

“One thing would be crop selection, there will be some crops that will be more efficient than others,” he said.

According to an article by Judy Scott, published in OregonLive on April 26, some crops that use less water are tomatoes, squash and melons. The crop selection solution will require the cooperation of the general public, who may have to deal with eating fewer almonds, as its farming accounts for 10 percent of California’s water use, according to an article by Eric Holthaus, published in 2014 by Slate Magazine.

Setter also proposed the use of genetically modified organisms as a method of saving water. He said scientists can modify and create crops that require less water and are able to survive during droughts. GMOs are a highly debated topic among different groups, however. California farmers can also find hope in the fact that this year is an El Niño year, which will drastically increase rainfall on the West Coast.

Rodger said reducing water usage is good, but that farmers will do what is economically feasible for them.

“Think of the farmer as the man or woman who has economic incentives to do one thing or another,” he said.

If the government offers incentives for farmers to practice more sustainable water use, then they will, Rodger said. In the end, the U.S. government has to make the choice to facilitate sustainable agriculture in order to promise food for future generations.

Agriculture is vital to feeding the world’s growing population. And given the present water situation, the United States and the agriculture industry must make changes in order to ensure there is sufficient food for the future.

Sophie Johnson is a freshman journalism major who is glad she’s not at Cornell majoring in agriculture. You can email her at sjohnson3@ithaca.edu.