RAW FROM THE SAW: Miley Cyrus and Her Dead Petz 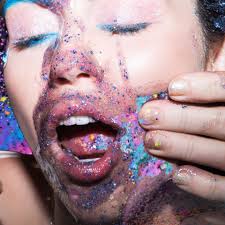 It’s safe to say that Miley Cyrus has come a long way from her Hannah Montana days, transforming from a sugar-coated pop star to a tongue-wagging twerking aficionado. Putting aside the giant inflatable penises and an embarrassing VMA hosting gig, Cyrus does tend to put out some decent tunes from time to time. And this time she managed to surprise, or rather confuse, us all when she dropped a 23-track double LP entitled Miley Cyrus and Her Dead Petz.

With the help of a somewhat unorthodox group of musical pals, including Mike Will Made-It, Ariel Pink and The Flaming Lips, Miley Cyrus and Her Dead Petz is more of a stoner side project than an actual album. From the start, it’s hard to take the whole thing seriously; even the artwork screams pretentious art school project. It’s easy to imagine this group of musicians pairing a bunch of random beats together and thinking, “Hey, this doesn’t sound half bad!”

Just one listen to the single-track “Dooo It!” will spur a giant eye-roll as Cyrus’s auto-tuned vocals scream “Yeah I smoke pot/ yeah I love peace/ but I don’t give a fuck/ I ain’t no hippie.” What more could be expected from a 22-year-old who wears fake weed leaves on her nipples? Yet it’s hard not to bump to the track’s psychedelic synths and hard bass line. There is a hint of ’90s hip-hop that really carries the song along, bringing it together as a kind of “space trap” subgenre. This can be accredited to hip-hop producer Mike Will Made-It, who has been buddy-buddy with Cyrus since the peak of her twerking obsession. His beats are what save this track from becoming a messy pseudo-existential anthem.

Will Made-It’s mentorship is sprinkled throughout the LP, giving songs like “Evil Is but a Shadow” and “Bang Me Box” the type of beat that never leaves your head.The lyrics in “Bang Me Box” are raunchy enough to make any conservative’s cheeks turn beet red: “I want yours inside of me/ But don’t forget where I like licking baby.” The song’s beat is infused with classic funk and smooth R&B. The distractingly sexual lyrics add a little charm to the tune: “Teach me a lesson, pretend we never met/ But we can keep just kissing cause you’re getting me so wet,” almost as if Marvin Gaye was in the room.

Much like Will Made-It, Cyrus’s BFF Wayne Coyne of the Flaming Lips can be heard having his part in songs like “Something About Space Dude” and “The Floyd Song (Sunrise).” The latter, being an elegy for Cyrus’s recently deceased Alaskan Klee Kai, includes a hazy acoustic riff and angelic background vocals that make one feel as if they are frolicking through a field of sunflowers. The former, with its stereotypical hippie title, also induces a type of musical “trip” that’s almost soothing. The random little guitar trills paired with the reverb on Cyrus’s falsetto make for one hell of a ride, which drags onto a lot of other tracks including “Cyrus Skies,” “Karen Don’t Be Sad” and “Pablow The Blowfish” — which just so happens to be another, quite atrociously written, ode to Cyrus’ deceased blowfish.

It’s blatantly obvious that Coyne, Cyrus’s right-hand man, had a lot to do with this album, probably drawing inspiration from his Yoshimi Battles the Pink Robots days. There’s even a two-minute track consisting of just vocals and ringing bells called “Miley Tibetan Bowlzzz,” which could either be described as the kind of track that normally plays during yoga classes for white suburban moms or some wildly culturally appropriative mix of Tibetan monk music. Cyrus’s other musician buds also contribute to the befuddling mix, including Big Sean’s misplaced rap verse on “Tangerine” and Phantogram’s Sarah Barthel’s seductive synth work on “Slab Of Butter (Scorpion).” Perhaps Cyrus is trying to compete with Taylor Swift in a battle for the highest number of famous friends one can show off in one performance.

Even if John Lennon had crawled out of his coffin and penned the most tear-inducing lyrics for Miley Cyrus and Her Dead Petz, the LP would be nothing more than filler music. While some tracks are great on their own, the entire LP gets old really quickly around halfway through. The overwhelming amount of artist collaborations blur the line between what is Cyrus’s contribution and what is an outside influence, ultimately making the whole thing forgettable. All in all, Miley Cyrus and Her Dead Petz is not an album to be taken seriously… like, at all.