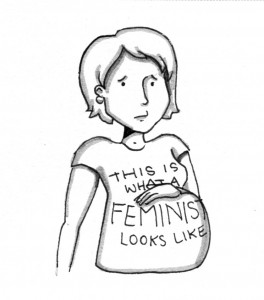 Feminism is often defined as the belief that people of all genders should have equal rights. However, some people who follow the traditional roles of femininity and masculinity have not been as overtly supported by the feminist movement because they live in ways associated with the patriarchy.

Researchers Suzette Dyer and Xuanqi Liu had a journal entry published in the Woman’s Study International Forum. These traditional roles, as explained by Dyer and Liu, are when motherhood is about physical and emotional care for children and often putting their own desires aside for their children, while for men it is breadwinning.

However, those who follow these roles are often excluded from the feminist movement. Francesca Hodge is a freshman at Ithaca College who identifies as a feminist. She said while feminists work for equality, exclusion is only counterproductive and all people have value.

Dyer and Liu’s study found that it is a trend for women to participate in roles men have had, but men do not seem to be pursuing the traditional roles of women.

Anne-Marie Slaughter, the CEO of New America Foundation, said in her TED talk both of these statuses are valued to some extent, but “stay-at-home” mother roles are often devalued. According to her speech, there is an association between the relationships between heterosexual monogamous couples in which men and women have traditional roles in the patriarchy. Sometimes people assume the woman is only in that role for a man to do what he wants. In response to these notions, Slaughter said negative assumptions of relationships and choices is quite harmful to the feminist movement because it neglects the fact that women can have a say in their relationships and devalues the motherly work of these women.

In 2009, the American Association of University Women conducted a study that analyzed the earnings and student load debt burden among a nationally representative sample of college students one year after graduation. In order to keep as many variables as possible out of the analysis, most of the students were 23, single and childless, working full time, attended similar colleges and universities and earned similar grades. The findings support that roles held by women are less valued by U.S. society than the roles held by men. The majors and occupations that had overrepresentation of men often had more earnings within that first year out of college. AAUW found that after only one year out of college, the average annual earnings for women only make up 82 percent of that for men.

Feminist philosopher Alison Jaggar explained in her book, Feminist Politics and Human Nature, that since the rise to capitalism, men’s roles have had higher value comparatively. In the U.S., the jobs men have held have continuously had higher pay. Women have been pushing into this kind of work but men have not shown as much interest in roles held by women. According to Slaughter, in order to get gender equality, ‘women’s work’ needs to be viewed more highly.

Meg Roney Jones works in health care, a field of female overrepresentation, and is a mother of two boys. She said she tries to promote ideals of gender equality in her home.

“We all have roles we may play due to our gender or identity – abilities and perceived stigmas,” Jones said. “I don’t believe any of these things should lead to a person having different expectations placed on them or rights granted or denied. Just because someone wants to act or dress a certain way, does not have to mean anything about their gender-based belief system and their beliefs about anyone’s rights in society.”

Liu and Dyer wrote in their journal entry that gender is a performance of speaking, acting and relating to others. According to their study, gendering tasks lead us to respond based on gender identity, which accounts for division of unpaid work. Social institutions, such as the family, are made up of gendered roles that can and have been identified.

Alex Brophy is a student at Nazareth College whose mother has stayed home to take care of children and the house most of his life.

“[She] was almost always home for myself and my brother and sister, and I think that played a huge role in shaping who I am, and I am extremely grateful that my mom raised me my entire childhood,” Brophy said.

Brophy said his mother chose to stay home, but occasionally chose to go to work.

However, Hodge said she thinks it is okay for women to follow traditional roles rather than choosing to pursue professional careers and that these women can still be strong advocates for the feminist movement.

“It’s really up to women to decide what they want to do in their lives, and if they want to stay at home and raise children, then that’s definitely their prerogative,” Hodge said. “No matter what someone’s lifestyle is made up of, they can support a cause.”

Brophy agreed and said men who fit into patriarchal roles can also have a place in feminism.

“I think anyone can truly support the feminist movement,” Brophy said. “I’m a straight, white, middle-class male and I support it because I see it as a movement that simply supports choice, regardless of what your choices are.”

Feminism has had many waves. In each wave, motherhood has played a part in the way views have been shaped about women, their roles, their relationship to men and the movement in general.

Claire McClusky is a freshman film, photography and visual art major who doesn’t dodge her mother’s phone calls. You can email her at cmcclusky@ithaca.edu.