Home IssuesEdible The Wacky Snacks of China
EdibleMinistry of Cool

The Wacky Snacks of China 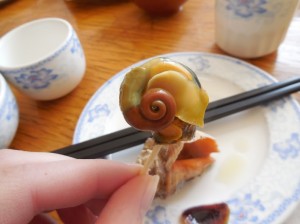 A six-month romp through the food of the Far East

Last semester, I had the opportunity to study abroad in Yantai, Shandong, China. Living in China for six months gave me ample time to try all of the aforementioned food as well as some that are less likely to appear on Fear Factor and more adaptable for Americanized taste buds. Often, the snacks I found in the grocery store were more intriguing than the food put in front of me in formal settings. While I could write a novel about all the strange food-ventures I had, here are just a few of China’s bizarre snack trends.

When looking at a country with as old of a history and culture as China, there is a clear divide between the more traditional flavor profiles and the modernized, mass-produced and manufactured junk food. My favorite of these more traditional oddities was something called pork floss, which I found much tastier than what came to mind from the name.

There are many ways of eating it, but on its own it looks like a bird’s nest of artificial-red-orange steel wool, sometimes leaning more toward a woody light brown color. The two most common forms of consumption I saw were wrapped in a flaky crust package small enough to fit in one’s palm with plenty of room or on a fluffy sweet bun with some kind of mild yet sugary mayonnaise gluing the fuzzy meat product to the bun. It’s also frequently eaten over rice, on sandwiches or shoved in the Chinese version of the Korean snack kimbap (a bit like sushi but with a colder, more veggie centered theme).

Texture-wise, it’s softer than it looks, dissolving quickly on the tongue with a range of flavors, sometimes smoky, sometimes much spicier than expected but always vaguely like sweet-seasoned pork. Making this tangle of meat cloud involves stewing, teasing, straining, drying, beating, mashing and tossing in a wok to finish it off. It’s a painstakingly long process to make from scratch, but if you ever wanted to know what meat-flavored cotton candy tastes like, it’s well worth the wait.

Depending on the region, sachima is another common snack. Whether cut into pocket-sized chunks or bricksized bars, it’s easy to mistake these guys for a foreign cousin of Rice Krispie treats. Each one is a tightly packed cake of fluffy nuggets of fried dough held together with a sugary syrup and often sprinkled with sesame seeds or flavored with eggs or milk.

Biting into one, I was surprised it squished like a packing peanut instead of crunching as I had expected it to. Flavor-wise they’re very bland with just a hint of sweet, comparable to a plain biscotti, perfect for eating with your morning coffee or tea.
Traditional Chinese snacks, like the aforementioned pork floss and sachima or bean paste and mooncakes, have very mild flavors with heavy after tastes. It is as if they’re only suggesting something sweet or the fiery revenge of back-heat sneaks up on you. On the other hand, the more modern junk food is packed with crazy bold flavors that are offered among a variety of products spreading like a bad fashion trend.

Green tea’s subtle flavor makes the perfect gateway from traditional flavors to modern and can be found in everything from Kit Kats to cookies. As the temperatures rose through the 20s (Celsius that is), lines grew outside the ice cream window of McDonald’s as people waited for their green tea soft serve.

Corn flavor was also wildly popular. The most alien form of corn snacks was a longer, denser version of a cheese doodle with a buttery filling, creating the illusion of eating vaporized popcorn. The most common corn treats were small hard candies shaped like corn that, unlike many American flavored candies, actually tasted exactly like nibbling on a cob of sweet corn.

Cucumber was probably the biggest flavor obsession, not ending with just the refreshingly sweet and salty Lay’s chips flavor and gum varieties (sold alongside lemongrass and lavender), but spreading to non-food products, like scented tissues.

The best place to see the never-ending flavor palate was in chips, followed closely by Oreo flavors. Pepsi and chicken chips are commonly mentioned on internet lists of crazy Chinese snacks. Having experienced them first hand, one could say it tastes like eating a barbecue chip after having drank a Pepsi earlier and after finishing the chip perhaps burping a little, just enough to have that vague hint of Pepsi return. With such a wide array of flavors it’s almost no surprise that finding “original” or “plain” is almost impossible.

Lisa Laffend is a sophomore integrated marketing communication major who is still pork flossing green tea Kit Kats out of her teeth. Email her at llaffen1@ithaca.edu.