Clothing for a Cause 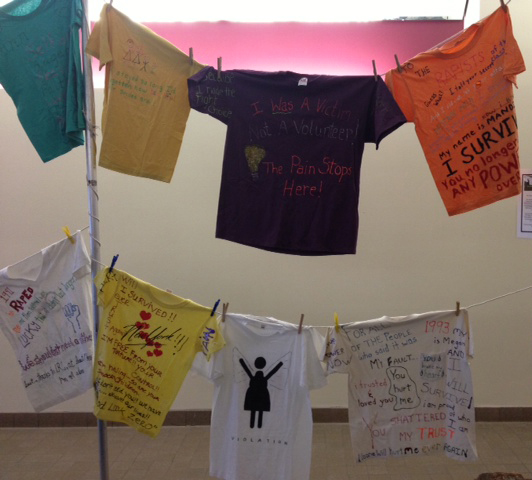 Dozens of t-shirts of all colors and designs were draped across clotheslines in front of Emerson Suites at Ithaca College on Tuesday, April 15. A purple one shouted, “I am a victim, not a volunteer. The pain stops here!” Another was plain with a drawing of a stick figure woman with angel wings, with one word — violation — in perfect black print underneath. Many students stopped by, interrupting their daily paths to wherever they were going, intrigued by the images and colors. But as they looked closer and saw what the shirts were all about — something that is still typically kept under wraps — their faces changed.

This is The Clothesline Project, brought to campus each year by the Advocacy Center of Tompkins County. As explained on its website, “The Advocacy Center (formerly the Task Force For Battered Women/Child Sexual Abuse Project) has provided support, advocacy and education for survivors of domestic violence since 1977, survivors of child sexual abuse since 1982 and survivors of adult sexual assault since 2003.” The t-shirts featured on the clothesline have been preserved by the organization, under its many names, for the last 20 years. All of the t-shirts were created by residents or students of Ithaca and its surrounding areas. This year, I was one of the representatives from IC’s Feminists United, and was excited to bring this moving project to campus with its purposes to educate our campus.

Kristi Taylor, an adult community educator at the Advocacy Center, organized throughout the community to bring The Clothesline Project to various places in Ithaca during the month of April to raise awareness and to market for Take Back the Night, an annual march, rally and vigil that takes place in DeWitt Park in downtown Ithaca.

“It’s great to pair with Take Back the Night,” Taylor said. “It helps to elicit emotions and then gives people a way to take action.”

Melissa Schwartz, a senior at the college currently interning at the Advocacy Center and helping to coordinate Take Back the Night, recalled seeing The Clothesline Project hanging up on campus for the past two years. She vividly remembered the effect of seeing it for the first time, magnified by its mysterious and striking visual presence outside (an action that was hampered this year by the pouring rain).

“I wasn’t sure what it was at first, but I figured it out,” she said. “I walked away from it feeling different — not bad, but inspired.” Its intensity, however, also caused a bit of discomfort. “It was weird to see it and then realize that I had to keep walking and go to class. It’s a weird shift.”

“That’s true of a lot of awareness campaigns,” Taylor said. “It really makes you stop and think. It takes the moment back.”
The project received a lot of attention from students walking by this year, and Taylor and Schwartz found it to be a very positive reception. Gianna Boccanfuso, a sophomore and co-president of Feminists United* on campus, who volunteered to supervise the exhibit during part of the day, was also pleased by its presence on campus.

“The people that I talked to while tabling found it interesting, intriguing, wanted to learn more about Take Back the Night because of The Clothesline Project,” she said.

Boccanfuso thought the project is important to bring to campus every year because of its strong representation of individual voices.

“I think it allows students and faculty to interact with such serious issues as sexual assault and domestic violence in a way that promotes education on the topic and action, but also makes the experience personal,” she said. “You’re reading the experience of people; you’re not reading a chart of facts and statistics. You can see mothers, sisters, sons, fathers, friends on those shirts. It also pushes people to want to learn more and become active.”

Taylor agreed that the activism of college campuses makes them an ideal place to display the project: “They’re an environment for new activists and people getting involved in these kind of issues. It really helps to put a tangible aspect on what you’re learning in class.”

“The goal is to show what abuse is and what it does,” she said, “but also to highlight that healing is possible.”

If you or someone you know has suffered from the issues discussed in this article, The Advocacy Center offers many services, including support groups, therapy services, legal advocacy, and crisis intervention. Visit their website at www.theadvocacycenter.org or call their hotline at 607-277-5000 for information or help.

*DISCLAIMER: Gianna is a member of Feminists United and identifies as a feminist, but does not speak on behalf of the organization, or of the feminist community as a whole. The quotes here only reflect her own opinions on the issues presented.