Home Issues Take A Scoop Out of Cornell
IssuesMagazineNews & ViewsSexweb-featured

Take A Scoop Out of Cornell 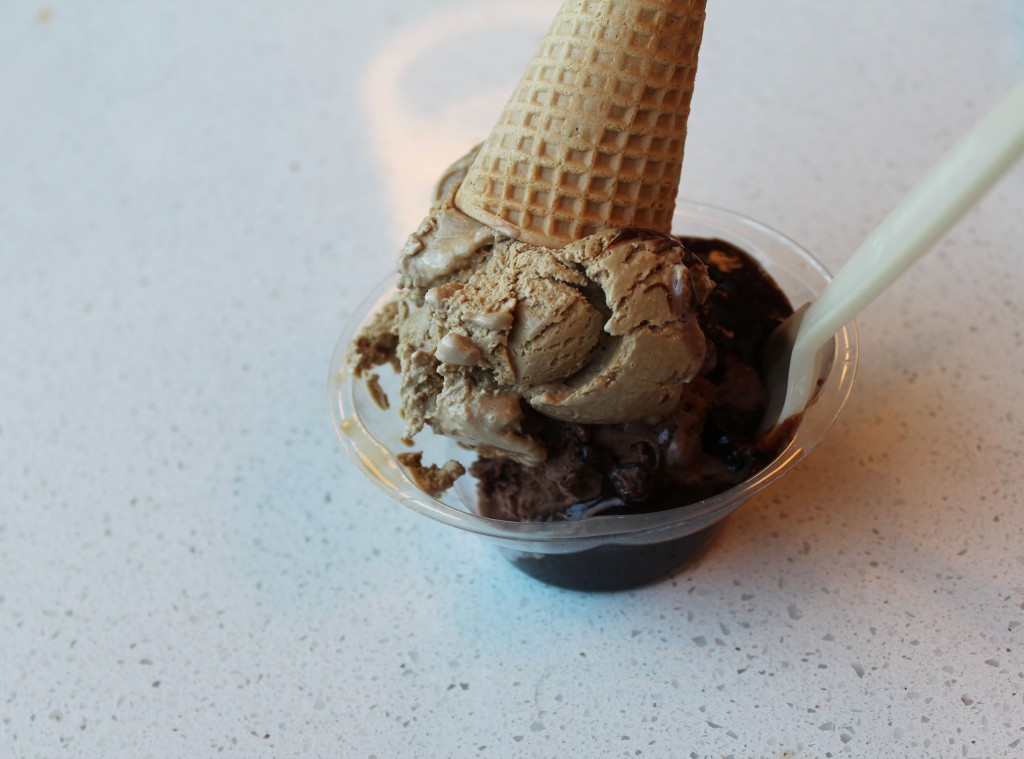 Cornell Dairy Bar is back after 3 years

Ithaca College’s neighbor on East Hill has a lot of iconic imagery to brag about. Some of the gorges that give Ithaca its famous tagline of “Ithaca is Gorges” run through Cornell’s campus, and the clock tower that graces most of the university’s merchandise can be seen from a good portion of the city and surrounding area. Within the Cornell community, a trip to the Dairy Bar is part of the obligatory student checklist, and with the Dairy Bar reopening after a three-year hiatus for revamping the food science facility in Stocking Hall, students can finally check off Cornell ice cream from their to-do list.

While the Dairy Bar itself has bounced around the Cornell campus, the dairy program has been part of the university since 1850, with the food science department in Stocking Hall since 1923. Plans to redesign the building started in 2007, and the department moved back this past July after three years of construction. Jason Huck, general manager of dairy operations, said the new facility helps promote the mission to support cutting-edge teaching, research and outreach.

“We built this plant to support research,” Huck said. “We obviously can support very applied, cutting-edge research in the facility from safety, milk quality, processing technologies, and then the biggest piece that we support, and it’s important in our mission as a land grant university, is outreach.”

The majority of the products that go through the Stocking Hall processing facility begin and end on the Cornell campus. According to Huck, 1.5 million pounds of raw milk come from the campus dairy farm every year for processing into products including yogurt, pudding and ice cream. Milk is bottled once a week, and juice from the Cornell orchards and orange farms in Florida is bottled once every two weeks. About 50 percent of the ice cream goes to the Dairy Bar, which is open to the public, but the rest of Cornell’s dairy products are brought to the campus dining facilities.

The new Dairy Bar, which opened in August, features campus dairy products in addition to coffee and deli sandwiches, and with the new store came a new logo for Cornell Dairy. While the old logo had a cow jumping over the moon on campus, the clock tower was added to the image to make it more iconic.

“We adapted to put more red in it for Cornell,” Huck said. “With our impact in the dairy industry, we wanted something that was professional but also fun.”

In addition to the campus eatery, Stocking Hall also features a gallery for students to hang out, a conference center for training with industry professionals and an auditorium for food science classes. Construction also reconfigured the parking lot, and the renovations on the other side of the building, Stocking Hall Tower, will be completed in 2015.
Ice cream is the top seller at the Dairy Bar, but the inventory for their 10 to 12 base flavors had to be at around 10,000 gallons before they could start selling due to the high demand.

“We definitely had a lot of excitement when we finally announced the day we were going to release ice cream,” Huck said. “I would say during the fall semester we had on some weeks as many as a dozen emails or phone calls asking when the ice cream was going to be ready.”

Requests for new ice cream flavors come from a multitude of sources, including dairy interns creating final formulations for testing, graduating classes seeking their specialized “Class of” flavor and food science courses working on projects. In December, students in the introductory food science course had to create a flavor that captured the essence of Stocking Hall. The winner, Cookie Dough Remodeled, features a dark chocolate ice cream with white chocolate chunks and sugar cookie dough bits.

Cornell claims the unofficial title of “Best College Ice Cream in the East” over the dairy program at Penn State University, but managers on both sides deny any actual rivalry. Tom Palchak, manager of Penn State’s Berkey Creamery, said he has known Huck for 10 years through annual meet-ups of the University Dairy Managers Association, and while he’s willing to put Penn State’s vanilla against any other ice cream, he can attest to the quality of Cornell’s products.

“We didn’t know that this even existed until I read that article,” Palchak said. “I know that Cornell makes delicious ice cream, and I’m sure that their students and staff and alums feel strongly about it as well, but we never had any competitive test.”

Instead, the two programs discuss processing, equipment and other aspects of dairy management. Palchak said it’s nice to have a partner at Cornell.
Rivalry or no, Cornell Dairy’s ice cream is a source of pride for the university and students, including newcomers like freshman Corey Ng.
“I go there, like, three times a week,” Ng said. “It’s great.”
____________________________________
Amanda Hutchinson is a junior journalism major who has already eaten all the ice cream. Sorry.  Email her at ahutchi2[at]ithaca.edu.